'The Les Miles Show' to Debut at TJ Ribs 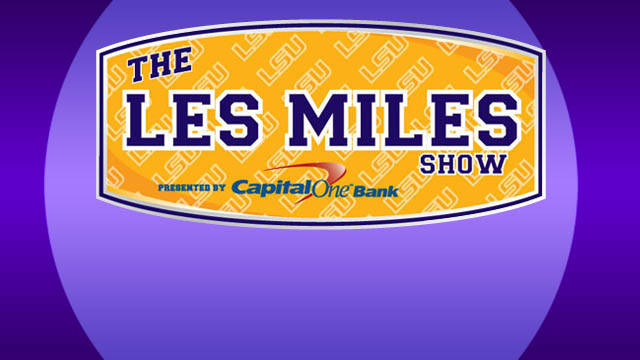 BATON ROUGE — The Les Miles Show presented by Capital One Bank will have its 2016 debut on Wednesday, Aug. 24, at 7 p.m. CT from TJ Ribs on Acadian Thruway.

The one-hour weekly radio show devoted to LSU football is held each week throughout the season at TJ Ribs. For the seventh straight year, TJ Ribs will serve as the home for all of LSU’s coaches shows.

The Les Miles Show presented by Capital One Bank can be heard across the state of Louisiana on the LSU Sports Radio Network (affiliates list). The show can be heard in the Baton Rouge area on Eagle 98.1 FM. Fans worldwide can also listen for free on the internet at www.LSUsports.net/live.

Cox Sports Television (CST) will televise The Les Miles Radio Show each week on a tape-delay basis for the second-straight year. The show will first air each Wednesday at 8 p.m. CT on CST.

The Les Miles Show presented by Capital One Bank will run for 14 straight weeks during the fall, including the week of the Tigers’ open date. The final show of the regular season will be held on Tuesday, Nov. 22.

The show will be hosted by the new Voice of the Tigers Chris Blair, who enters his first season of calling play-by-play for LSU football games.

* Tuesday due to travel to College Station, Texas