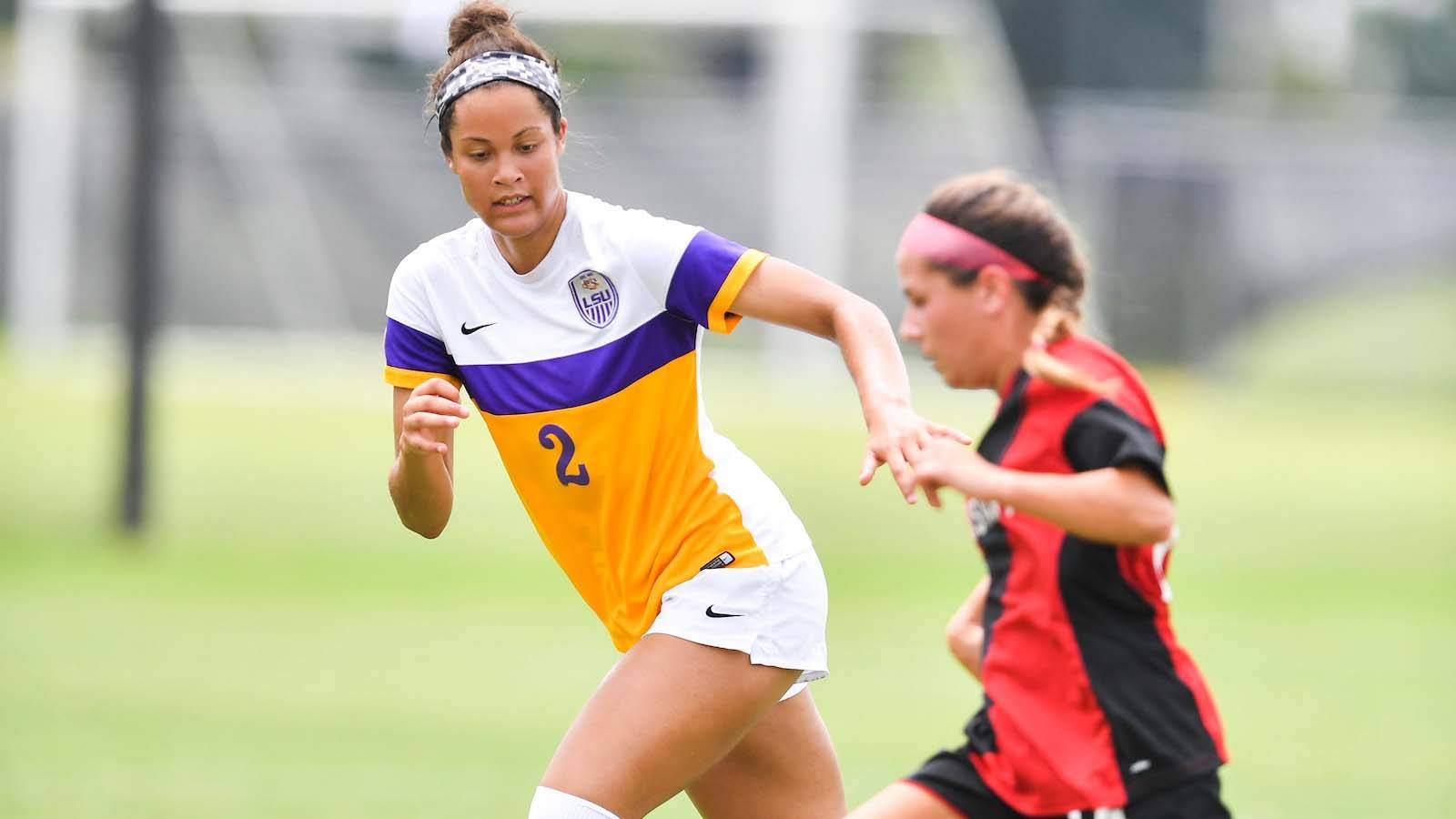 CHARLESTON, S.C. – Jordane Carvery‘s first career goal in the 25th minute of the first half and a solid defensively display throughout the match lifted the visiting LSU Soccer team to its first victory of the 2016 season with a 1-0 win over host College of Charleston in Sunday’s finale at the Charleston Classic at Patriots Point.

The Tigers (1-1) have come away from Patriots Point with shutouts in each of their two matches all-time with the Cougars (0-2) after also picking up a 4-0 win in their inaugural meeting on Sept. 21, 2007.

“I’m really pleased with our response from Friday night,” said LSU head coach Brian Lee. “Sunday afternoons are mostly about fight and how hard you work for the full 90 minutes, and I think our players did a good job of that to earn a result today. This gives us something positive to build on as we get ready for George Washington on Thursday.”

The Tigers sustained early pressure in the match as freshman Marlena Cutura and junior Debbie Hahn forced Cougar goalkeeper Lauren Killian into action in the opening stages. Killian went low to her left to deny LSU’s Cutura the opening goal on an open effort from the top of the box in the ninth minute before making a leaping save on Hahn’s looping header from a corner kick just four minutes later.

Carvery would give the visitors the lead midway through the first half with her first goal as an LSU Tiger as she buried Cutura’s fourth corner kick of the match with a header at the far post in the 25th minute.

“I thought we played much better than we did our first game. We came out with a bang, we worked hard. We worked as a team, as a unit, which is something we needed to improve on,” Carvery said after the match. “Marlena had great crosses into the box, and I just finished off a chance. It was an easy one to finish where she served it in.”

The Tigers threatened to double their advantage into the second half when senior Summer Clarke skipped across the box and fired an open strike on the hour that was deflected out of play for a corner kick and junior Jorian Baucom fired on frame from eight yards following an entry pass by sophomore Alex Thomas in the 62nd minute. Baucom was later denied a breakaway attempt with less than two minutes to play that might have sealed the victory when she stepped in front of a Cougar free kick near midfield and found herself off to the races.

Carvery, Thomas and Hahn teamed with senior Megan Lee at the back to stifle the Cougars going forward as they limited the home side to just six shots in the match. Sophomore goalkeeper Caroline Brockmeier saved each of the three shots on target she faced to earn her first clean sheet as an LSU Tiger.

“Debbie (Hahn) did an amazing job coming in at the back. She had a great attitude when she came in. She did a great job listening to Megan (Lee) and I about when to go and when to tuck in,” Carvery continued. “Alex (Thomas) did a great job blocking shots and anticipating what was going on. We just worked well as a unit, which is what a back four needs to do.

“Caroline communicates with us and tells us what to do and where to be when we need some direction, who to play it to. She’s strong on crosses and makes great saves, which is what we need her to do.”

With their season-opening weekend at the Charleston Classic at Patriots Point now in the books, the Tigers will welcome George Washington to Baton Rouge on Thursday night for their 2016 home opener that is ready to kick off at 7 p.m. CT at the LSU Soccer Stadium. They follow with another home match against visiting Colgate next Sunday, Aug. 28, at Noon.