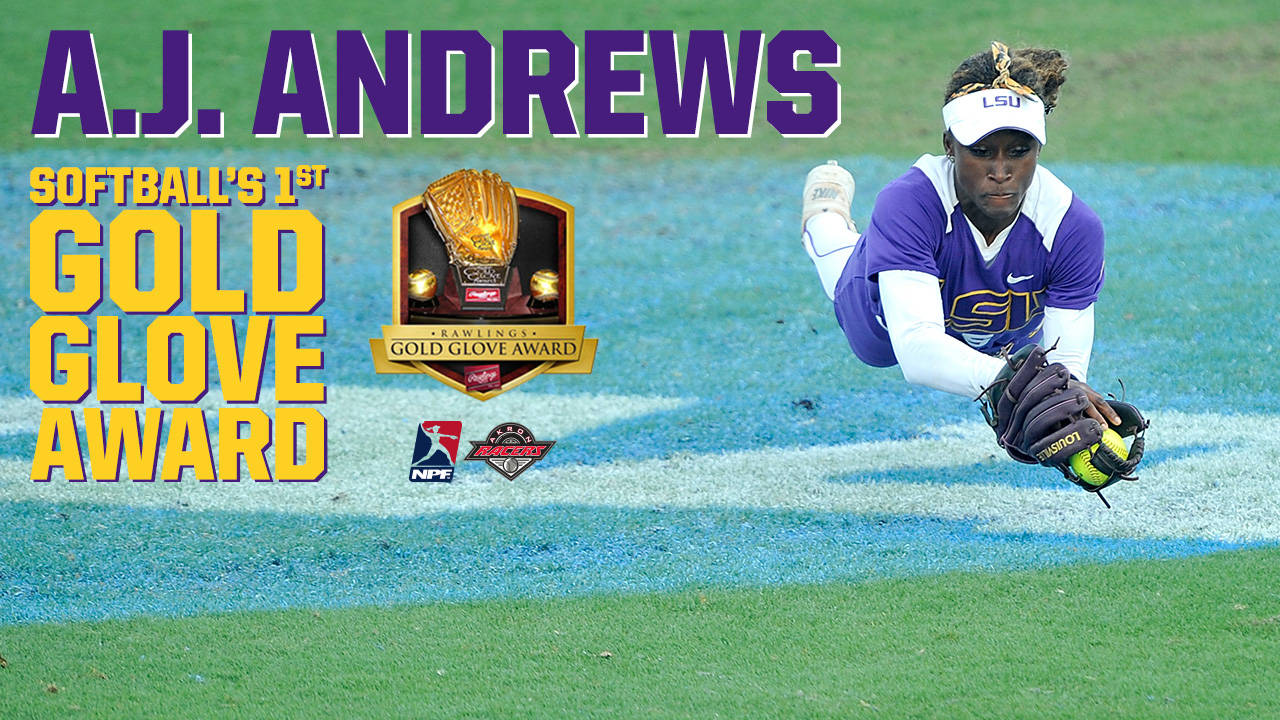 TUSCALOOSA, Ala. – On the eve of the National Pro Fastpitch Championship Series, history was made on Thursday evening as Rawlings Sports awarded for the first time in its history a Gold Glove Award to a female athlete with the honor going to former LSU standout A.J. Andrews at the pre-Series banquet in Tuscaloosa.

Roaming the outfield for four seasons in the Purple and Gold at Tiger Park, Andrews has been a fan favorite since joining the league after her senior season in 2015, as this year with the Akron Racers the Oldsmar, Florida, native has made some of the signature plays in the outfield that earned her three All-SEC honors and an All-American nod during her stellar collegiate career.

Another look at AJ Andrews’ catch. Someone find the full speed version. No doubter for #SCtop10 pic.twitter.com/vdY1xZVcUp

Andrews finished the NPF regular season tied for the most stolen bases with 15, while holding a perfect fielding percentage for the Racers who go into the championship weekend as the fourth seed. Andrews hit .259 on the year with seven doubles and two home runs, driving in 10 and crossing the plate 24 times.

During her LSU career Andrews batted .321 and started 235 of 240 total games played. She left LSU in the top five all-time in triples (20), walks (116) and stolen bases (97). She ended her career helping lead the Tigers to a pair of Women’s College World Series appearances, where in 2015 the Tigers finished tied for third.

“I remember the first ball I ever hit to A.J. in practice where she dove backwards through the fence her freshman year and I thought I seriously injured her,” head coach Beth Torina said. “But it was at that moment I knew how special she was and what true courage looked like.”

AJ Andrews with a spectacular dive out in right to rob Goodacre of a base hit! #GoPride pic.twitter.com/zwgwlzKtAy

Andrews now joins former Tiger baseball player DJ LeMahieu in 2009 as the only Tigers in LSU history to earn Gold Glove awards, while being the first school to have an award winner in both baseball and softball.

“To be the first female recipient of the Rawlings Gold Glove award is a true honor, and I think she will be a great representative for what the award stands for and continue to be a role model for all of the young girls playing our sport,” Torina said.

This softball player has graduated from diving catches to conquering the right field wall: https://t.co/FFmzBUi3W4 pic.twitter.com/CdKp1xr9ih