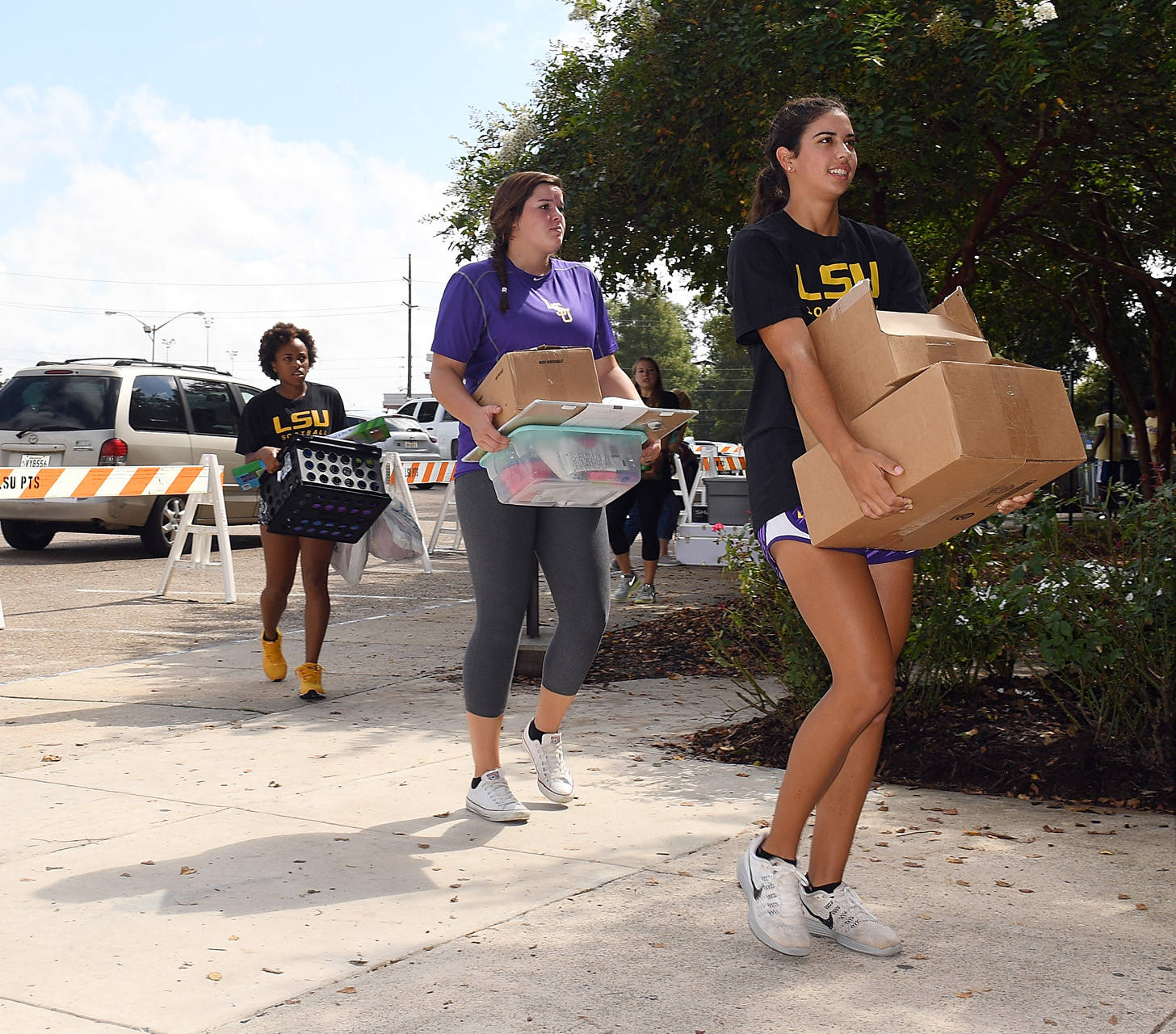 BATON ROUGE—LSU student-athletes and coaches assisted in Move-In Day for the fourth consecutive year, helping incoming freshmen move into their new homes at the residence halls on campus Wednesday.

Student-athletes from 11 different sports helped to haul refrigerators, microwaves and other dorm necessities to ease the strain of the move-in process and get the students acclimated with campus in preparation for the fall semester, which begins Monday, Aug. 22.

“You want their first experience to not be so hectic as what it was when you were first moving into college,” men’s tennis head coach Jeff Brown said. “Those first moments are tough. Your parents are overwhelmed; you are overwhelmed. Especially with what we have going on right now with a lot of these families, we just want to make sure that we can help someone in a small way and make a big difference. “

The student-athletes could be seen around campus from the Residential College Complex to Herget Hall assisting fellow students.

The Tigers are all over campus today, helping students move in. Welcome! #myLSUhome #GeauxTigers pic.twitter.com/Cn6Afa98qC

Fullback J.D. Moore said, “It’s been really great to help out all of the freshmen move in today and just to be a bright spot amidst all of the tragedy that’s been happening in Louisiana, welcoming them to LSU and showing them that we are really happy that they are here.”

.@brycejordan200 talks move-in day and how the Tigers enjoy giving back to the community. #myLSUhome pic.twitter.com/3vMgyXkCeA

The student-athletes efforts have not been focused solely on campus, however, but on the community as a whole due to the historic flooding in south Louisiana.

The volleyball team has been assisting at a shelter set up at Celtic Studio and also helped the Denicola family mud out its home.

After assisting in the 2016 Move-In Day, the baseball team traveled to Livingston Parish to help flood victims, including the mother-in-law of former Tiger Ben McDonald.

Shortstop Kramer Robertson said, “Ben’s a part of the LSU family, and we want to take care of him and his mother-in-law. We are going to go out to Denham Springs to help them out and whoever else may need help out there. The more people and manpower we have, the better.”

The student-athletes and coaches explained that returning the favor to the community is the least that they can do with the amount of people who come out to support the Tigers on a regular basis.

“It’s just important to show everybody that we care,” softball’s Akiya Thymes said. “They come out and support us at all our games, and it’s important to welcome them to LSU and show them that it’s a great community to be in. Baton Rouge is a great city, and no matter what, we are always willing to help out.”