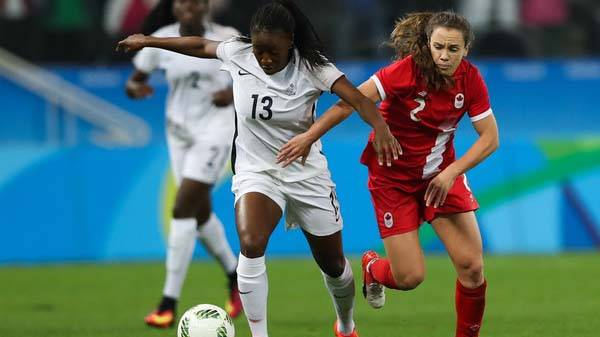 BATON ROUGE – Despite former LSU standout Allysha Chapman being substituted with an apparent shoulder injury minutes before halftime, the Canadian Women’s National Team advanced to its second-straight Olympic semifinal with a 1-0 shutout of France in Friday’s quarterfinal match at Corinthians Arena in Sao Paulo, Brazil.

Chapman took to the field as Canada’s starting left back once again after also cracking the starting 11 in the team’s 2-1 victory over European Champion Germany in its final group match on Tuesday.

With the match still scoreless near the break, Chapman went down hard on her left shoulder under the weight of French midfielder Camille Abily when defending a cross into the box and was unable to continue as she was replaced in the lineup by Josee Belanger in the 42nd minute of play.

Chappy is subbed off just before halftime with an apparent shoulder injury defending a cross into the box. #CAN #FRA pic.twitter.com/4OfNaLuzhx

Friday’s quarterfinal was a rematch of the Bronze Medal Match from the London Olympics in 2012 when Canada scored a 1-0 win over France to win its first ever Olympic medal in the women’s soccer competition. And Sophie Schmidt’s winning goal in the 56th minute of Friday’s match secured the same result as the Canadians advanced to the medal rounds once again at the Rio Olympics.

Thanks for all the kind messages! This team beasted it today. True grit. So proud of everyone. #CanWNT

Their victory set up a rematch in the semifinal round with the Germans, who also advanced from Friday’s quarterfinal round with a 1-0 defeat of China. Canada and Germany will square off in the Olympics semifinals on Tuesday afternoon at 2 p.m. CT at the Estadio Mineirao Belo Horizonte. Sweden defeated the United States in penalties earlier in the day to set up a semifinal match with host Brazil.

“We showed that Canadian grit again,” said Canada’s head coach John Herdman in a story posted to CanadaSoccer.com. “That’s what takes teams through tournaments. Our whole team defensively was very disciplined and then we had our moment of quality as Sophie Schmidt’s goal was outstanding. It was just another real team performance. I am just proud of what we are showing as we are off to the medal rounds, but we are not done yet.”

The medal rounds for the women’s soccer competition at the 2016 Olympic Games will be held on Friday, Aug. 19, as the Gold Medal Match will kick off at 3:30 p.m. CT at the famed Maracanã in Rio de Janeiro following the conclusion of the Bronze Medal Match beginning at 11 a.m. CT at Corinthians Arena in Sao Paulo.

French right wingers beware when @AllyshaChapman is in defense! #CAN vs #FRA in today’s quarterfinals at 5 p.m. CT! pic.twitter.com/U54Id4l8Bt