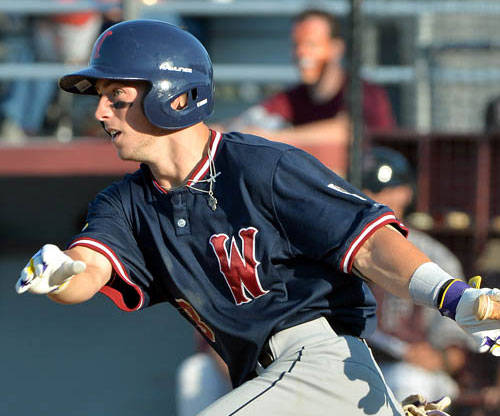 Freeman appeared in 29 games for the Gatemen, starting at second base and hitting mostly in the leadoff spot. In 115 plate appearances, he collected 43 hits, five doubles, six RBI and 23 runs. Paired with his success at the plate, Freeman was stellar on defense and had plus speed on the base paths with 13 stolen bases on the season.

“It’s an honor,” Freeman said when asked about winning the Cape Cod batting title. “It wasn’t something I came up here trying to do. It just speaks to the coaches and the approaches that, back at LSU and up here, who told me ‘If you can do this, you’ll be successful.’ It’s a big thing for me and my family, but I’m not going to stop working, so I’ll keep improving until I’m batting a thousand!”

Freeman, a native of Mandeville, La., was LSU’s leading hitter in 2016 after transferring from Delgado Community College in New Orleans. Freeman batted .329 (71-for-216) with the Tigers with seven doubles, three triples, one homer, 27 RBI, 46 runs and 26 stolen bases.

He was selected in June in the 18th round of the MLB Draft by the Los Angeles Dodgers, but elected to return to LSU for his senior season.

Freeman said he reached the offensive goals he had set upon arriving in Wareham in June.

“Obviously, I wanted my average to be up there,” Freeman explained. “But, mainly I wanted to drive the ball, gap-to-gap more, have a little more extra- base hits, and I wanted to improve on my bunting – push and drag. Those were the really big things, hitting-wise, I wanted to come out with, and for the most part, I did that.”

Freeman and his LSU teammates will begin fall semester classes on Monday, August 22. The Tigers will engage in a four-week period of conditioning drills and individual workouts before beginning their six-week fall practice session on Sunday, September 25, in Alex Box Stadium, Skip Bertman Field.