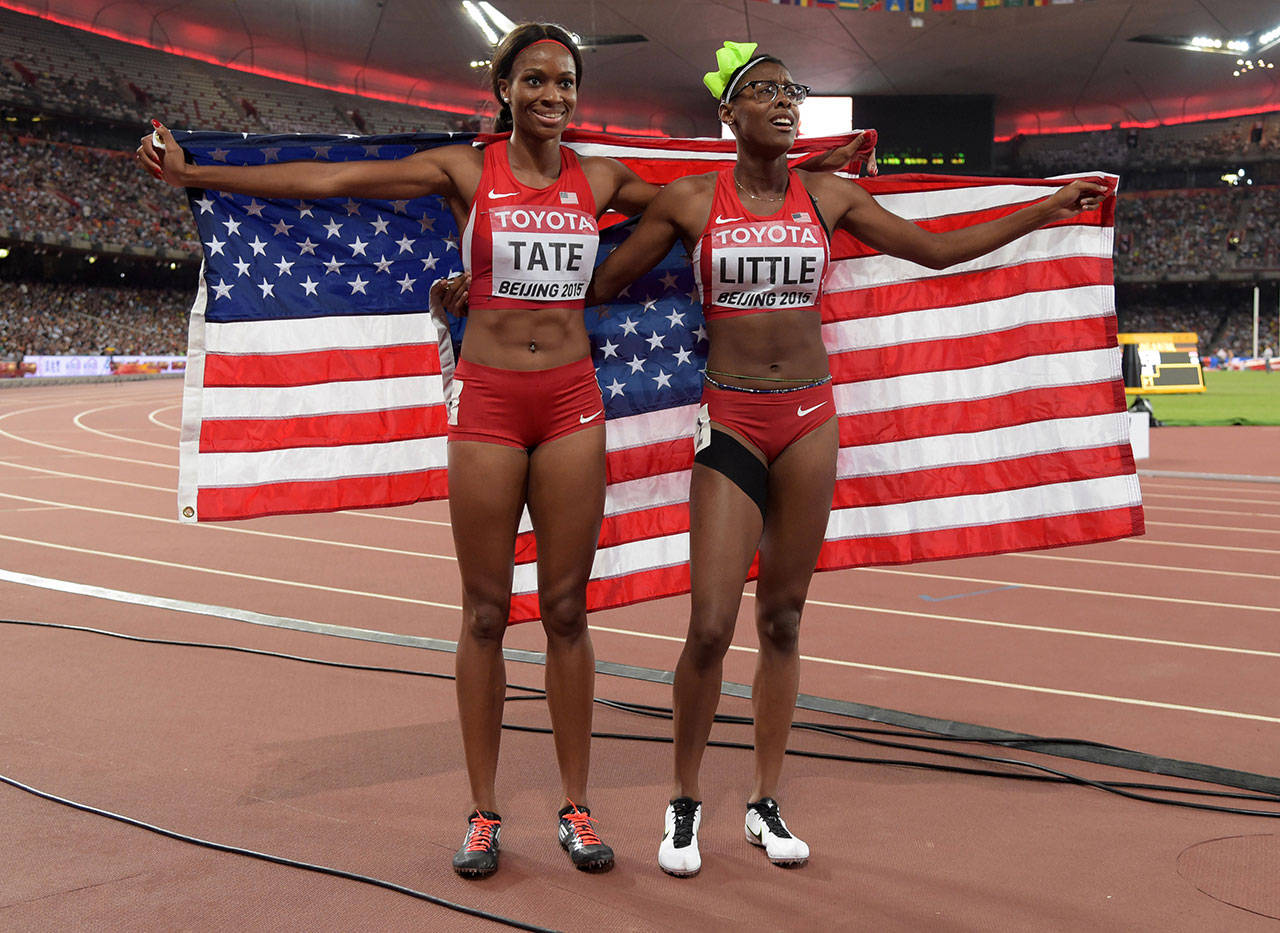 The first time a coach suggested Cassandra Tate try hurdles she was in the sixth grade and she figured what the heck.

“It was definitely not my idea at all,” she admitted all these years later.

The next time it happened was when Tate was in college with eyes on becoming one in a line of great LSU sprinters. But it wasn’t going to happen.

“First of all, her physical characteristics let me know she could hurdle,” LSU track coach Dennis Shaver said. “She has really good speed but yet she doesn’t have elite NCAA-type speed. She could run a pretty good 200 but her physique convinced me this young lady could be a really good 400 hurdler.”

Shaver said they thought about trying her as a sprint hurdler.

“But she was limited because of her height, getting those three steps in (between hurdles),” Shaver said. “That’s when we thought about the 400 hurdles. She was running really good 4×4 splits indoors and so it was kind of no-brainer. But I have to give her credit. She was willing to try anything to help.”

It not only helped LSU, it certainly helped Tate. Now, the product of Loranger, who turned 25 on Monday, is in the mix to make the U.S. team for next summer’s Rio Olympics. And the height thing? Tate’s only 5-foot-9, but seemingly has the longest legs you’ve ever seen.

“My legs are extremely long,” she said.

And that wasn’t lost on her sixth-grade coach.

“My coach suggested it and I told him I would try it. My form wasn’t that great, but when it was time to compete I was winning. It was so easy for me to get over the hurdles and I was pretty fast.”

She laughed at the memory.

And she smiled again at the memory of Shaver suggesting it again. Tate came to LSU from Loranger High, which is near Hammond, as a dominating Louisiana high school sprinter and sprint hurdler. But after her freshman year at LSU, Shaver told her not what she wanted to hear, but what he really thought.

“And my heart dropped,” Tate said.

“I remember telling her and her mother both that is something I really believe you can be good at some day,” Shaver said. “It’s just going to take some time and you’ll have to show some patience, but I think you can be an elite U.S. 400 hurdler someday.”

Her LSU stats proved him right. Tate was a two-time NCAA champion (2012 400 hurdles, 4×400 relay), a six-time All-American and four-time SEC champion when she graduated in 2012 after a four-year career with a degree in human resources.

“She graduated from LSU in four years and has always been a lady-like person, a great leader and a great representative of our program,” Shaver said.

“It was crazy,” Tate said, shocked at the time at her immediate success in the event, because as a sophomore she won the SEC title and later earned All-American NCAA status. “It was a learning experience for me. A lot of people didn’t know I only started hurdling in 2010.”

“Of course I started liking it,” she laughed. “I was winning. I said let’s see where this goes.”

It went pretty far. In 2012, Tate finished fifth in the Olympic Trials.

“I didn’t make the team, but I was proud of myself. I had come a long way in a short amount of time.”

Tate, who never played any other sports but was a dancer, proclaimed herself boring when not training: “I just stay home and watch TV and read books.”

But she got even more exciting on the track. In 2013 and 2014, she continued to make strides and then this summer everything clicked.

A month ago, in Beijing at the IAAF World Championships, Tate actually clipped a hurdle, the ninth of 10, and still won the bronze medal. She had the fastest qualifying time, 54.27 seconds, ran 54.33 in the semifinals and in the final went 54.02. The winning time was 53.50.

After the world meet, Tate took a break, a Hawaiian vacation, and is now two weeks away from starting the process of making the Olympic team.

“She ran nine of her 10 best times of her life this year and I consider this year to be a real break-through at the next level,” Shaver said. “With this being the first year of the breakthrough I hope she knows more about what it takes now and that’s there’s more there and she’s going to run faster next year.”

The top three will make it at next year’s Olympic Trials.

“I haven’t really thought that far ahead,” Tate said. “And there’s a target on my back now and I haven’t had that before.”

Just another hurdle for a hurdler.

As I prepare to leave Beijing tomorrow, I can’t help but to reflect back on how special this week was for me. To have my parents in the stands watching as I received my first medal was truly a blessing. As I stepped on the podium, I couldn’t help but to think back on how far I’ve come. This experience has been nothing short of amazing, God is good, and I do believe the best is yet to come. #Beijing2015 #Blessed #GreaterisComing