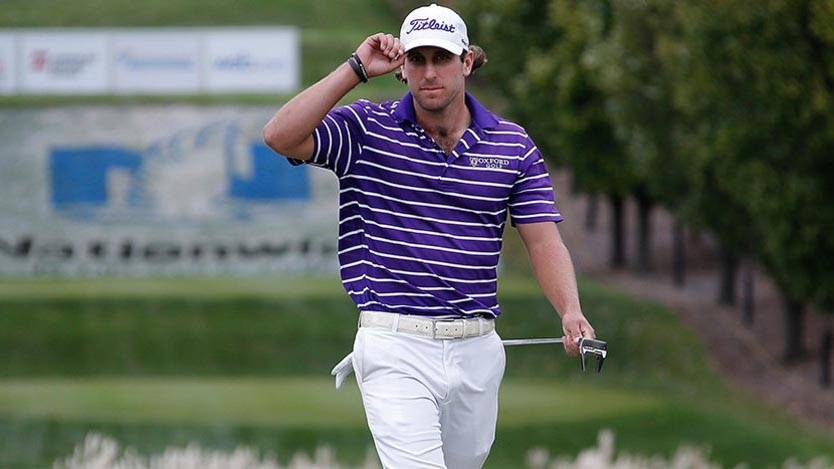 COLUMBUS, Ohio – Former All-American Andrew Loupe became the second LSU Tiger to be crowned a Web.com Tour champion this season when he fired a 1-under 70 in Sunday’s final round to capture a two-shot victory at the Nationwide Children’s Hospital Championship held this weekend at Ohio State University Golf Club’s Scarlet Course.

Loupe arrived at the third stop in the four-event Web.com Tour Finals competition ranked No. 33 on The Finals money list with only the Top 25 finishers after their upcoming Web.com Tour Championship this weekend receiving their PGA TOUR cards for the 2015-16 season. He had accumulated only $10,642.30 with his finishes in the first two Web.com Tour Finals events in recent weeks.

Loupe followed a tie for 22nd at the Hotel Fitness Championship on Sept. 13 with a tie for 53rd at the Small Business Connection Championship at River Run before teeing off at the Scarlet Course this weekend.

He left no doubt in his PGA TOUR status for the 2015-16 season as he posted a 5-under par 279 in 72 holes to finish two shots clear of Tom Hoge, Bronson Burgoon and Roberto Castro in a tie for second place at 3-under par 281 and claim the Nationwide Children’s Hospital Championship title on Sunday afternoon.

After opening the championship with an even-par 71 in Thursday’s opening round, Loupe followed with rounds of 1-under 70 on Friday, 3-under 68 on Saturday and 1-under 71 on Sunday to earn just his second title as a professional along with his first win at the National Golf Association Pro Golf Tour’s Bridgestone Winter Series event at Timacuan in Orlando, Florida, back in February 2012.

By taking home a $180,000 paycheck for his victory, Loupe catapulted himself 30 spots up the Web.com Tour Finals money list and into the No. 3 position with $190,642.30 in earnings through three events. He will tee it up at the Web.com Tour Championship at TPC Sawgrass this weekend knowing his PGA TOUR card is already secured for the upcoming season.

He trails only the $215,066.66 won by Chez Reavie and the $203,142.85 won by Henrik Norlander on the updated Web.com Tour Finals money list heading into the Web.com Tour Championship.

“I knew what I had on the line. I just kept telling myself to take it on this week,” Loupe said to Royce Thompson in his recap of the Nationwide Children’s Hospital Championship for PGATOUR.com. “It’s been a long time since I’ve won, I guess I’ve got to cherish these moments. It’s hard to win in golf, but I always believed. I’ve been telling myself for a long time that I can do this.

“To be honest, this course stood out to me. I thought that it was probably my best chance to get one because you can use length as an advantage a little bit out here. That definitely played a key role.”

A fully-exempt member of the PGA TOUR for the 2014-15 season, Loupe sought to keep his tour card for next season through the Web.com Tour Finals after finishing 198th on the PGA TOUR’s FedEx Cup Standings this year. Those qualifying for the four-event Web.com Tour Finals were the Top 75 players on the Web.com Tour’s 2014-15 money list, Nos. 126-200 in the PGA TOUR’s FedEx Cup Standings and non-members who earned enough money to have placed in the Top 200 had they been eligible to receive points.

Loupe made five cuts in his second season on the PGA TOUR in 2014-15, including his second career top-10 finish with a tie for sixth place in July’s Barbasol Championship at Grand National in Auburn, Alabama.

Among those earning their PGA TOUR card as a Top 25 finisher on the Web.com Tour’s regular-season money list was former LSU standout Smylie Kaufman, who placed No. 6 with $248,088.33 in winnings in the season that included his first professional victory at the Web.com Tour’s United Leasing Championship Presented by PTI back in May where he took home a check in the amount of $108,000.

In all, LSU’s former PING All-Southeast Region performer cracked the Top 10 of the final leaderboard in four Web.com Tour events during the 2014-15 season while tying for fourth place in back-to-back tournaments at the Chitimacha Louisiana Open presented by NACHER in March and the El Bosque Mexico Championship in April, as well as a runner-up finish at the Price Cutter Charity Championship in August.

The LSU program will be well-represented on the PGA TOUR in 2015-16 with four card holders as Loupe and Kaufman will compete alongside tour veterans David Toms and John Peterson, who maintained their cards in 2014-15. Former LSU All-American Curtis Thompson will also compete next season with exempt status on the Web.com Tour for the second-straight year.