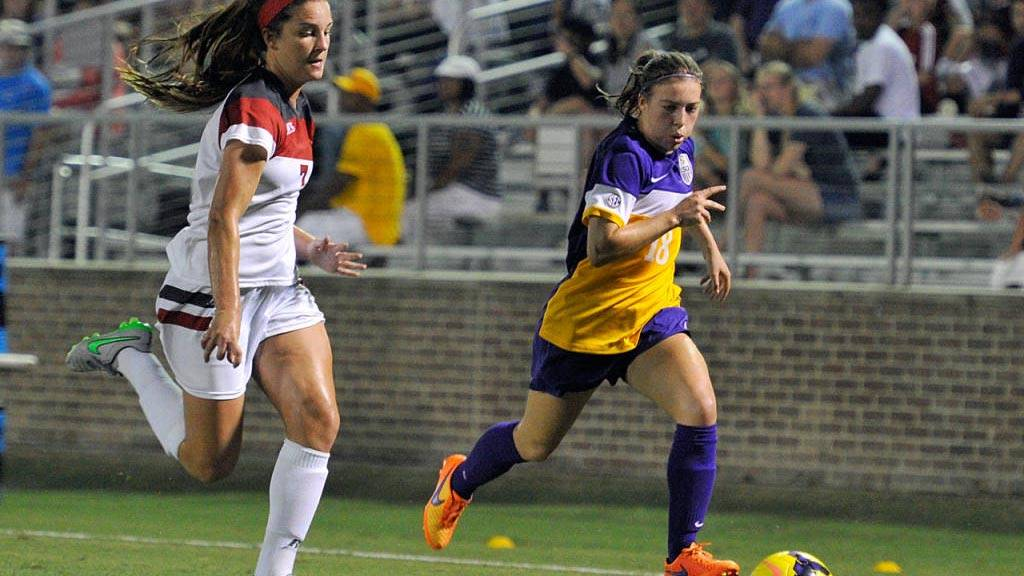 OXFORD, Miss. – The 24th-ranked LSU Tigers failed to find the scoresheet for the first time during the 2015 season as they dropped their second-straight match in Southeastern Conference play with a 2-0 setback to the Ole Miss Rebels on Sunday night while wrapping up their SEC weekend road swing at the Ole Miss Soccer Stadium.

The Rebels immediately went on the front foot in the match and turned their early pressure into the opening goal when Gretchen Harknett scored the breakthrough in the 17th minute with her second goal of the year. Liza Harbin picked out Harknett in the right side of the area where the striker’s looping effort from the top of the box dipped just under the crossbar to give Ole Miss the 1-0 lead at the 16:02 mark.

Ole Miss sustained the pressure for much of the opening 45 minutes while attempting nine shots and winning nine corner kicks in the first half to just one shot and two corner kicks for the visiting Tigers.

The Tigers picked up the pace to start the second half with Alex Thomas‘ firing the first shot on target for her side in the 51st minute when she ran onto Summer Clarke‘s layoff for a 14-yard strike that was kept out by a well-positioned Marnie Merritt in goal for the Rebels. Sophomore striker Jorian Baucom then nearly equalized for the visitors on 64 minutes with a header on frame from close range after Clarke beat her defender near the end line and fired across to Baucom standing eight yards in front of goal.

Sophomore midfielder Debbie Hahn also went close just a minute later after referee Corey Rockwell played advantage following a foul on senior captain Natalia Gomez-Junco near the center circle. Hahn dribbled to an opening at the top of the box and whistled a low-lining effort just wide of the right post that would have leveled the score in the 65th minute.

But the Rebels doubled their advantage in the 69th minute when the Tigers were unable to clear the danger after the ball was played into the box from the left flank. Junior striker Addie Forbus latched onto a loose ball just outside the area for an uncontested strike and found the side netting inside the left post for her eighth goal of the season to extend Ole Miss’ lead to 2-0 at the 68:43 mark.

Maldonado and Hahn were the leading Tigers in the attack with two shots apiece on the night with each of Maldonado’s finding the target. Baucom, Thomas and junior Megan Lee had one attempt apiece.

After wrapping up their weekend road swing in SEC play at Ole Miss on Sunday night, the Tigers return home next weekend as they play host to the visiting Vanderbilt Commodores at the LSU Soccer Stadium on Friday night with kickoff set for 7 p.m. CT on the SEC Network+. They will follow with a match against the Missouri Tigers on Friday, Oct. 9, with kickoff also set for 7 p.m. CT.