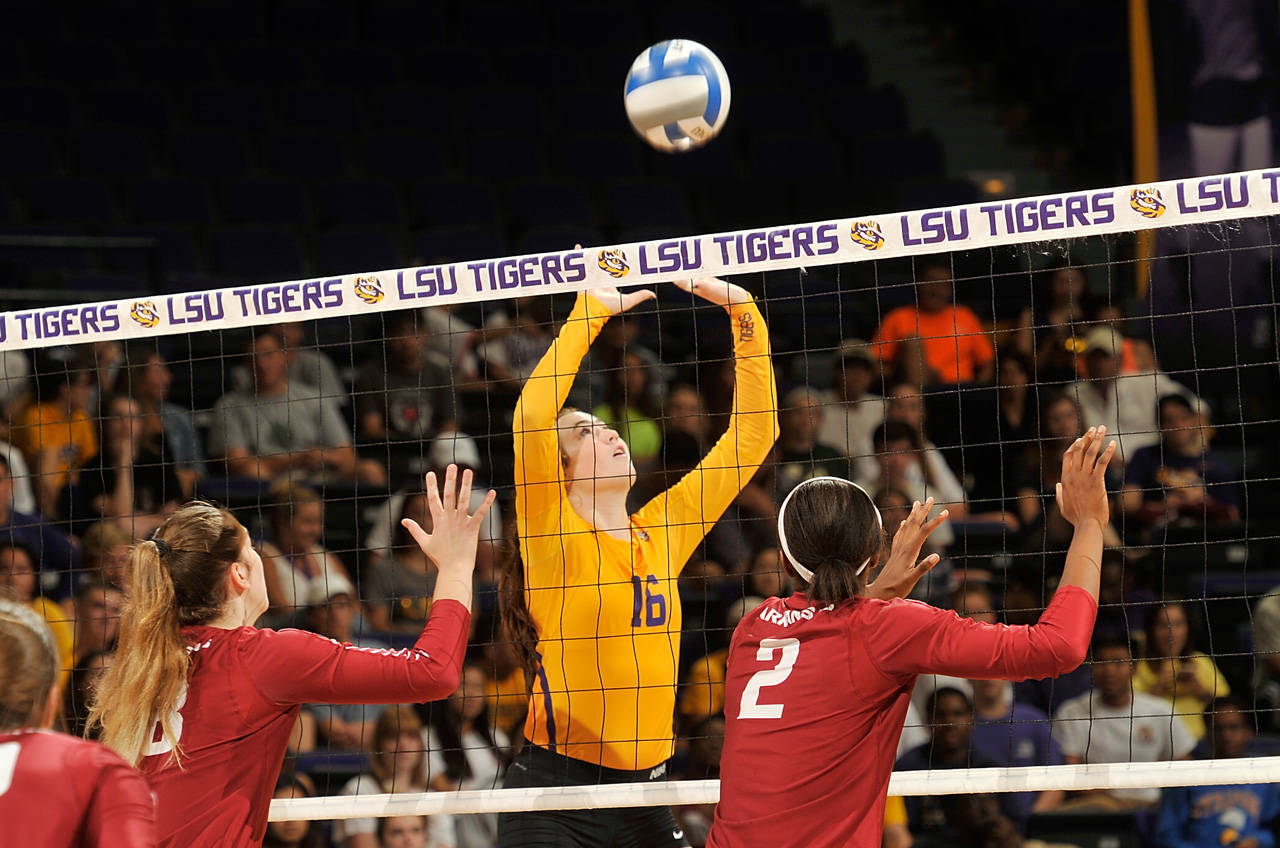 The match between the two teams will be streamed live online through SEC Network+, available through WatchESPN for computers, smartphones, tablets and streaming devices, with Lyn Rollins and Yvette Girouard calling the action Sunday afternoon. For fans unable to make it to the venue or watch online Sunday, a link to live stats of the match can be found at LSUsports.net, with continuous updates on the team’s Facebook and Twitter pages.

LSU will welcome Girl Scouts from the Baton Rouge area to the Maravich Center on Sunday, as registered participants will be able to begin the day with a poster making session before the match and after making their way to the court for a post-match serving activity. The first 1,000 fans through the doors can pick up an LSU volleyball hair tie.

The Tigers move on to their second conference match of the season on Sunday looking to bounce back after suffering a 3-2 loss to the Arkansas Razorbacks Wednesday night in a stirring contest. It was the fourth consecutive five-set thriller between the two in recent years, giving the team confidence heading into the match with the Gamecocks Sunday.

“Even though we lost Wednesday, I think we gained a little confidence through that match and I think we will be even better getting through,” head coach Fran Flory said. “I think the goal of this team is to improve each week, and so far in the last three, four weeks we’ve improved.”

In front of a crowd of nearly 1,400 fans the Tigers rallied to split the first four sets with the Razorbacks Wednesday, winning the second and fourth sets after Arkansas took the first and third. The match was so close that the second and third needed extra points to decide a winner, the most for the team in a match this season. The match ran nearly three hours by the time it finished, as Arkansas made just enough plays in the end to take the fifth and earn the win.

Still, the Tigers were able to hit above .200 for the fourth time in their last five matches overall, getting another standout blocking performance from the group that saw the team out-block the Razorbacks 14.0-9.0 – a season-high mark for the group.

“Arkansas might be one of the top two or three teams in the league, and for us to be able to stand toe-to-toe with them in a great atmosphere with a great crowd of our students and fans, should give our players confidence to know that we are going to be OK in the SEC,” Flory said.”

The contest was an all-around solid match for many LSU players, beginning with the attack of Cati Leak and Toni Rodriguez who combined for 30 of the team’s 58 kills in the contest. Leak leads the team averaging 3.67 kills per set, while in just 29 sets Rodriguez is third averaging 2.45 per set, as she earned her best hitting clip as a Tiger with a .314 average.

Senior Katie Lindelow earned her second consecutive double-double, being the only other player with double-digit kills with 12, while tying for the team lead in digs with 17 against the Razorbacks. The Mandeville native also tied her career best in blocks as she finished with five as she has 19 on the season.

Another senior with a standout match was Emily Ehrle who led all players with seven blocks, setting a new high mark for the Texan, while tacking on a new season-best five kills as well. Ehrle leads the team in blocks with 25 on the year, including having five on the solo end which is tied for the team lead.

Sophomore Cheyenne Wood earned her second match this season with at least 30 assists, leading the setters averaging 5.63 per set. Lindsay Flory had 14 assists along with her three blocks and three digs, as she is second behind wood averaging 3.58 per set.

Haley Smith continues to lead the charge for the team with the highest digs per set average in the SEC in LSU, as she finished with 17 against Arkansas and is in the top five in the league averaging 4.16 per set with 212 already this year. With 1,336 digs and counting, Smith currently sits in fifth place all-time among LSU leaders, continuing the climb toward the leading record of 1,527 of Dani Reis.

The Tigers will be facing another team that is coming off of a conference-opening loss, as South Carolina fell in three sets to the Kentucky Wildcats at home in Columbia on Friday. The Gamecocks have lost two straight since going on a three-match winning streak, falling to Coastal Carolina in four on Tuesday before opening league play on the weekend.

“South Carolina is running a completely different offense than what we just prepared for, so the key for us will be to run a more balanced defensive system and being prepared to be a little more mobile than we were earlier this week,” Flory said.

LSU has been successful against South Carolina during the recent series history, winning nine of the previous 10 meetings against the Gamecocks. The Tigers won both of their meetings last season, defeating South Carolina in four sets in Baton Rouge and Columbia.

AT A GLANCE – South Carolina