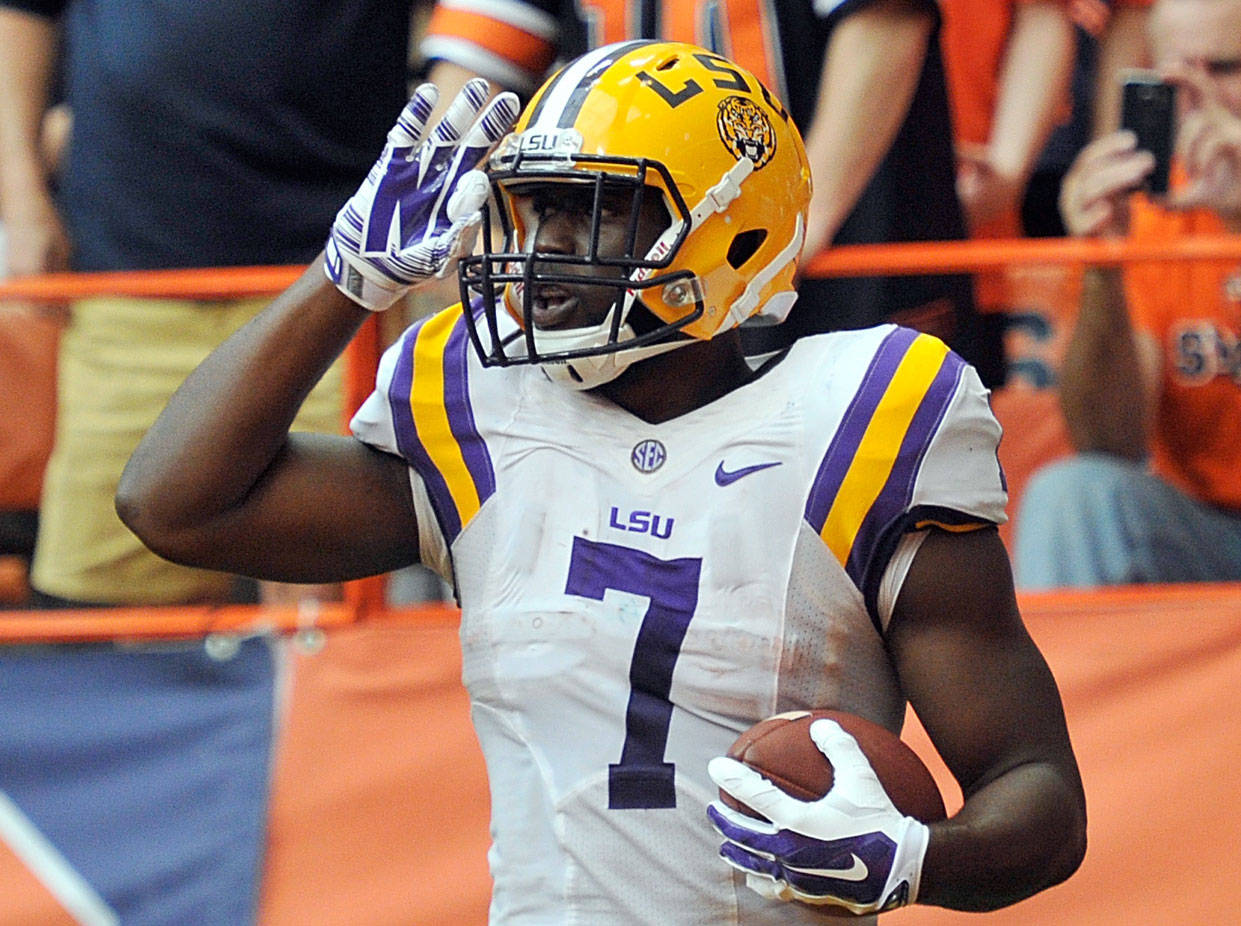 SYRACUSE, N.Y. – Leonard Fournette led No. 8 LSU to New York for the first time since 1942 and left with consecutive 200-yard efforts for the first time in school history, as the Tigers overcame Syracuse – and 14 penalties – to win, 34-24, Saturday afternoon at the Carrier Dome.

After a 228-yard effort in less than three quarters of a blowout win over Auburn last weekend, Fournette scored two touchdowns on 26 rushing attempts for 244 yards against the Orange, the third-most yards in a single game in LSU history. The sophomore phenom also had an 87-yard touchdown sprint called back by a formation penalty.

With 268 total rushing yards against the nation’s third-ranked rush defense, LSU (3-0, 2-0 SEC) knocked Syracuse (3-1) from the ranks of unbeatens and won its 50th-straight non-conference game in the regular season in the process.

The Tigers return home Saturday evening and will next face Eastern Michigan in Tiger Stadium on Oct. 3 at 6 p.m. CT. The game will be televised by ESPNU.

Alongside Fournette, starting quarterback Brandon Harris completed 8-of-16 passes for 157 yards with a touchdown pass that put the game out of reach in the fourth quarter.

LSU strugged with penalties throughout the contest, amassing 120 yards on 14 flags.

Syracuse sophomore quarterback Zack Mahoney led the Orange in rushing and passing, completing 16-of-38 passes for 154 yards with three touchdowns. He had 40 rushing yards on seven carries including a sack.

LSU won the coin toss and deferred its decision until the second half. Syracuse’s speedy junior Brisly Estime received the opening kickoff and ran 37 yards from his goal line to start the game. After three plays went for seven yards, the Orange punted from its 41 and Tre’Davious White elected to return from the LSU 3 to the 9.

The Tigers earned a first down with a face mask called against Syracuse and another on a short run by Fournette but LSU was forced to punt when Harris’ third-down pass was just out of reach for wide receiver John Diarse. Jamie Keehn‘s 13-yard punt off the side of his foot gave the Orange possession at its 47.

Two passes off the mark by Mahoney and a direct snap to freshman running back Jordan Fredericks netted only two yards. The Orange quickly punted back, pinning LSU at its 9 after White’s fair catch.

A pair of first-down passes by Harris went for 12 yards to Dupre and 14 yards to wide receiver Trey Quinn to get LSU out of its endzone’s shadow. LSU had a pair of false start penalties sandwiched around a 12-yard pass to Diarse. On second-and-8 from his 37, Harris appeared to be taken down in the backfield by Syracuse’s Ron Thronton but kept his head up to find Fournette for a lateral. Fournette galloped 48 yards along the left sideline to the Syracuse 15. Two plays later, LSU lined up with three wide receivers to the right and Fournette took the handoff around the left end for a 14-yard touchdown run.

Sacks by LSU’s Greg Gilmore and Syracuse safety Antwan Cordy led to consecutive three-and-out drives. A 28-yard punt return by Estime put the Orange in LSU territory for the first time, however, an incomplete fourth-and-3 pass from Mahoney turned the ball back to LSU at its 40.

Two more penalties on the Tigers (false start and holding) forced a third-and-13 at the LSU 37, where Harris was sacked to end the drive.

Starting from its 40, Syracuse put forth its only scoring drive of the half, spanning 33 yards in nine plays and ending with a 43-yard field goal by Cole Murphy. LSU led 7-3 with 6:58 left in the half.

Two more penalties on its next drive led to another LSU punt.

On the final drive of the half, Syracuse marched to the LSU 29 with less than a minute to play. Rather than attempt a 46-yard field goal, Syracuse holder Riley Dixon took the ball around the right end and gained a first down at the LSU 24. After throwing an incomplete pass into the endzone with seven seconds left, Syracuse placekicker Cole Murphy’s 31-yard field goal attempt from the right hashmark hit the right goal post and bounced away as time expired in the half.

Behind Fournette’s 117 yards on 10 carries, LSU took a 7-3 lead into the lockerroom.

On its first drive of the second half, the Tigers extended the advantage with a 21-yard field goal following a 12-play, 76-yard drive. Harris completed third-down passes of 8 and 42 yards to Dupre before Fournette ran seven yards to setup first-and-goal at the Orange 9. However, a throw away by Harris and two runs by the quarterback came up short of the goal line, leading to the field goal. Trent Domingue‘s field goal pushed LSU’s advantage to 10-3 with 9:44 remaining in the third quarter.

The long drive by LSU – and the return of linebacker Deion Jones, who was suspended for the first half due to a targeting penalty last week – sparked its defense and then its special teams.

After a three-and-out by the Orange, White fielded a 54-yard punt at the LSU 31 and sprinted 69 yards through the middle of the Orange coverage for a touchdown that put LSU ahead 17-3.

A personal foul on LSU again provided field position for the Orange on the ensuing drive. Two plays later, Mahoney passed over the top of the Tigers defense for a 40-yard touchdown to Estime.

Syracuse cut the LSU advantage to 17-10 with 6:02 remaining in the third quarter.

On four-straight Fournette runs, the Tigers answered back. After his first negative run of the game, the sophomore back took a straight handoff from Harris and sprinted up the middle for a 62-yard touchdown run. The four-play, 75-yard drive again put the Tigers up 14 points, 24-10, with 4:09 left in the quarter.

After LSU had an 87-yard touchdown run by Fournette called back illegal formation, the teams traded punts.

From its 44, Syracuse put together a 7-play, 56-yard touchdown drive that included two 15-yard penalties on the Tigers – a personal foul face mask and pass interference. The drive ended with a 2-yard touchdown pass from Mahoney to Lewis on third-and-goal.

On its ensuing drive, LSU gained a first down behind Fournette to the LSU 37 and then overcame his 6-yard loss on first down with a 51-yard pass to Travin Dural to the Orange 11 on third-and-8. On the next play, Harris put another ball right on the fingers of Dupre for a touchdown.

Three plays after the score, Mahoney’s third-down pass was batted into the air by LSU defensive end Arden Key and intercepted with a diving catch by Jones at the Orange 26.

The Tigers managed only a 37-yard field goal by Domingue after a false start and a negative run forced second-and-goal from the 20.

LSU led 34-17 with 5:11 to play. Syracuse scored its final touchdown on a 2-yard toss from Mahoney to Dontae Strickland with 1:53 remaining.

The Tigers secured the onside kick and ran out the clock.

Ed Ingram has seen it all. Being on top of the mountain, going undefeated and winning a national championship. But also the trials and tribulations of playing a football season in the midst of a pandemic. He’s been there every step of the way.
Skip To Main Content