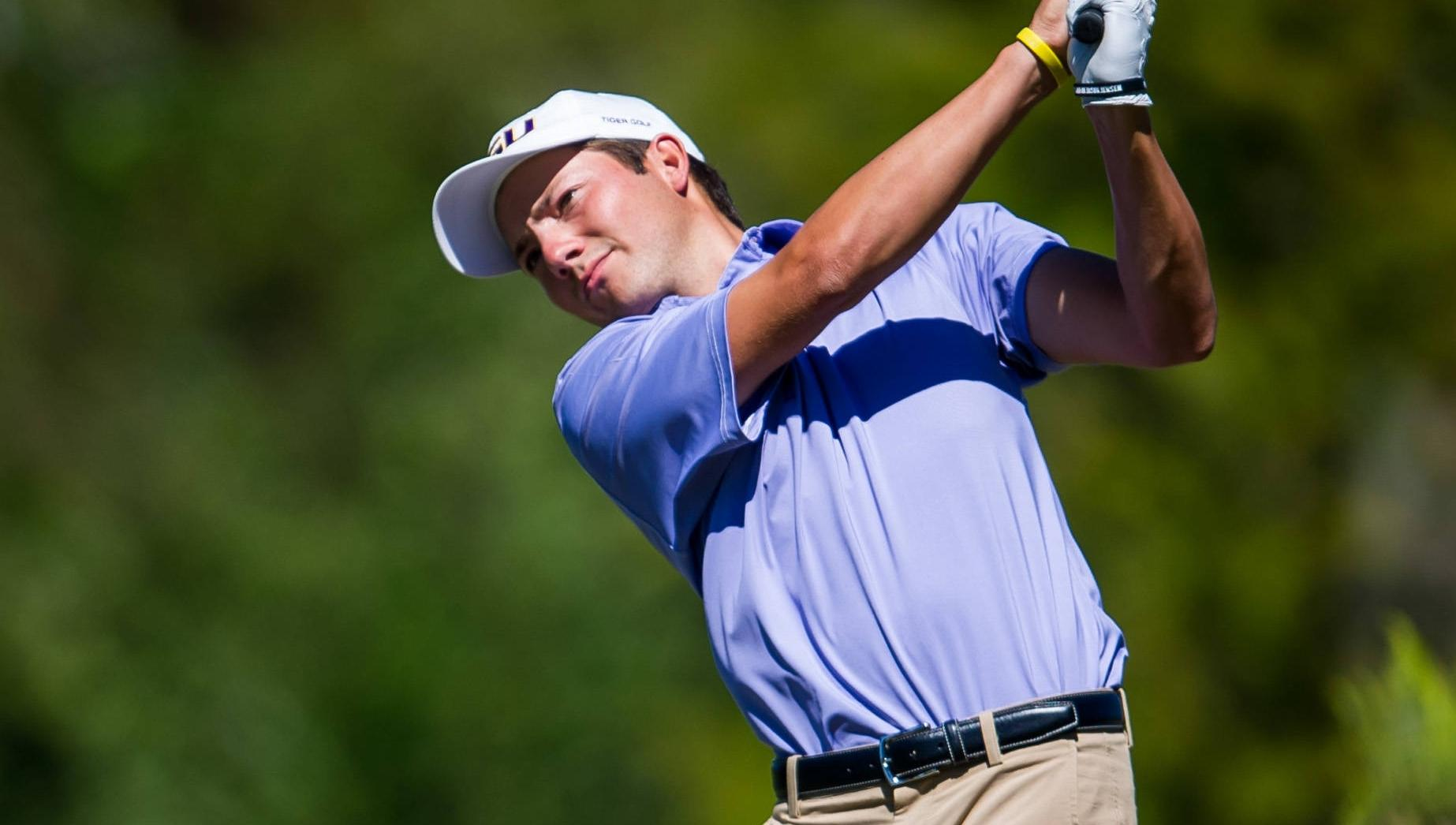 BURLINGTON, Iowa – Senior All-American Zach Wright leveled a 1-under 35 on the front nine with a 1-over 37 on the back nine for an even-par round of 72 in Friday’s first round at the Golfweek Conference Challenge to finish the first day of the competition at Spirit Hollow Golf Course in a tie for 15th place on the individual leaderboard.

As he was in LSU’s season opener at the Carpet Capital Collegiate Classic two weeks ago, Wright was the top Tiger on the day as he carded four birdies and four bogeys for a 72 in the opening round.

Freshman Sam Burns followed Wright with a score of 2-over par 74 and junior All-American Eric Ricard and freshman Nathan Jeansonne added matching scores of 4-over par 76 toward LSU’s team total in the first round as the Tigers finished Friday’s opener in 11th place overall with a score of 10-over par 298 in defense of their team title at the Golfweek Conference Challenge.

The NC State Wolfpack blistered Spirit Hollow Golf Course with an opening score of 19-under par 269 to jump out to a commanding 12-shot lead over Charleston Southern in the race for this year’s title. The Buccaneers fired a 7-under 281 to follow in second place, while Iowa followed in third place at 4-under 284, SMU trailed in fourth place at 1-over 289 and Kansas State and VCU ended the day tied for fifth place at 2-over 290.

After opening his senior season with a tie for fourth place at the Carpet Capital Collegiate Classic, Wright turned at 1-under par on his opening round at the Golfweek Conference Challenge with back-to-back birdies for the par-five second and par-three third holes before giving a shot back with his first bogey of the day at the par-four fifth. He got back to 2-under par for the round with a birdie at the par-five 10th hole and finished the day with bogeys at Nos. 15, 16 and 18 around a birdie at No. 17 for an even-par 72.

Wright wrapped up the first day of action in a tie for 15th place overall, while Burns followed two shots back in a tie for 31st place with his opening round of 2-over 74 at Spirit Hollow Golf Course. Also following Wright for the afternoon were Ricard and Jeansonne in a tie for 48th place with matching scores of 4-over 76. Jeansonne made his collegiate debut in Friday’s opener while playing his first competitive round at LSU.

In the debut round of his junior season, Rhyne Jones rounded out the LSU lineup with an opening 5-over 77 to finish the day just one shot behind Ricard and Jeansonne in the squad in a tie for 55th place overall.

Firing the NC State Wolfpack to the top of the team standings in the first round were David Cooke and Nolan Mills as they equaled Iowa’s Raymond Knoll and Charleston Southern’s Austin James with scores of 6-under 66 for a four-way tie for first place on the leaderboard. NC State’s Jacob McBride and Eastern Michigan’s Brett White followed two shots back with rounds of 4-under 68 on the day.

The Tigers are paired with San Jose State and Southern Illinois in Saturday’s second round at the Golfweek Conference Challenge as they will tee off in the first wave off the back nine beginning at 9:15 a.m. CT. Golfstat will provide live scoring of the second and third rounds of the tournament as fans can follow the Tigers in action online at http://golfstat.com.