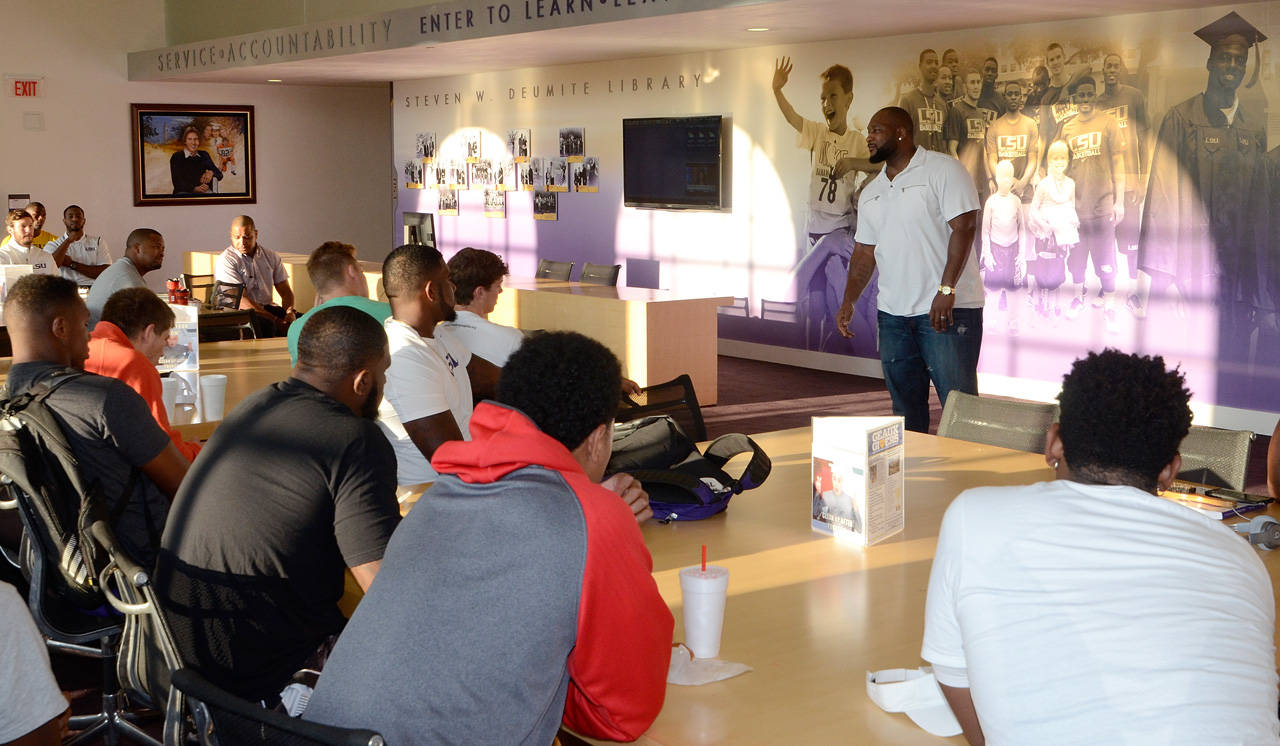 BATON ROUGE, La. – LSU football players came together in the Cox Communications Academic Center for Student-Athletes to meet with former LSU football star Marcus Spears last Friday. Spears, in town as a part of the SEC Network’s traveling ‘SEC Nation’ show ahead of the Auburn game that Saturday, was a defensive end at LSU for four seasons from 2001-04, before going to the NFL where he spent nine more years playing with the Dallas Cowboys and Baltimore Ravens.

This is the second consecutive year that Spears has spoken with the S.W.A.G group, a program for freshmen football players called Students With A Game Plan.

Currently working for the SEC Network as a college football analyst, Spears seems to be enjoying life after his football playing career. During his time speaking to the LSU football team, Spears challenged the players to think about life beyond their current situation. He wanted players to think about the future, and the things that they need to do in order to be successful.

Throughout his speech Spears continuously encouraged the student-athletes to dig deep within themselves, and push for their goals. Spears believes that student-athletes are given a lot of opportunities and are provided with countless resources, and that it is up to them to utilize the resources and take advantage of the opportunities.

“It is always important for these guys to understand the opportunities they have, but also the moment. As a society we have tendency to tell people when they are young, that they have time, that you have time to figure it out and do this, do that,” Spears said. “In sense you do, but the age that we are living in, there is not any time for you to just meddle around. You need an objective, a goal to go somewhere and accomplish what you need to accomplish because once you graduate from college and you’re 21, 22-years-old and you haven’t figured that out yet, it is too late.”

Derrick Dillon, a freshman wide receiver for the Tigers, relished the chance to be able to learn life lessons from the former Tiger standout.

“It was a good experience,” Dillon said. “I learned a lot from it, and I can use what I learned later on in college.”

Many in attendance enjoyed the speech by Spears, and thought the message contained a valuable lesson for all student-athletes.

“We are very appreciative to have such a successful LSU alum like Marcus Spears, who has made the continued commitment to mentor our freshmen football student-athletes that have participated in the S.W.A.G. program the past two fall semesters,” CCACSA Associate Director of Academic Affairs, Jason Shaw said. “Hearing first-hand the wisdom and advice he imparts as these students navigate a path he has successfully traveled is an invaluable opportunity.”