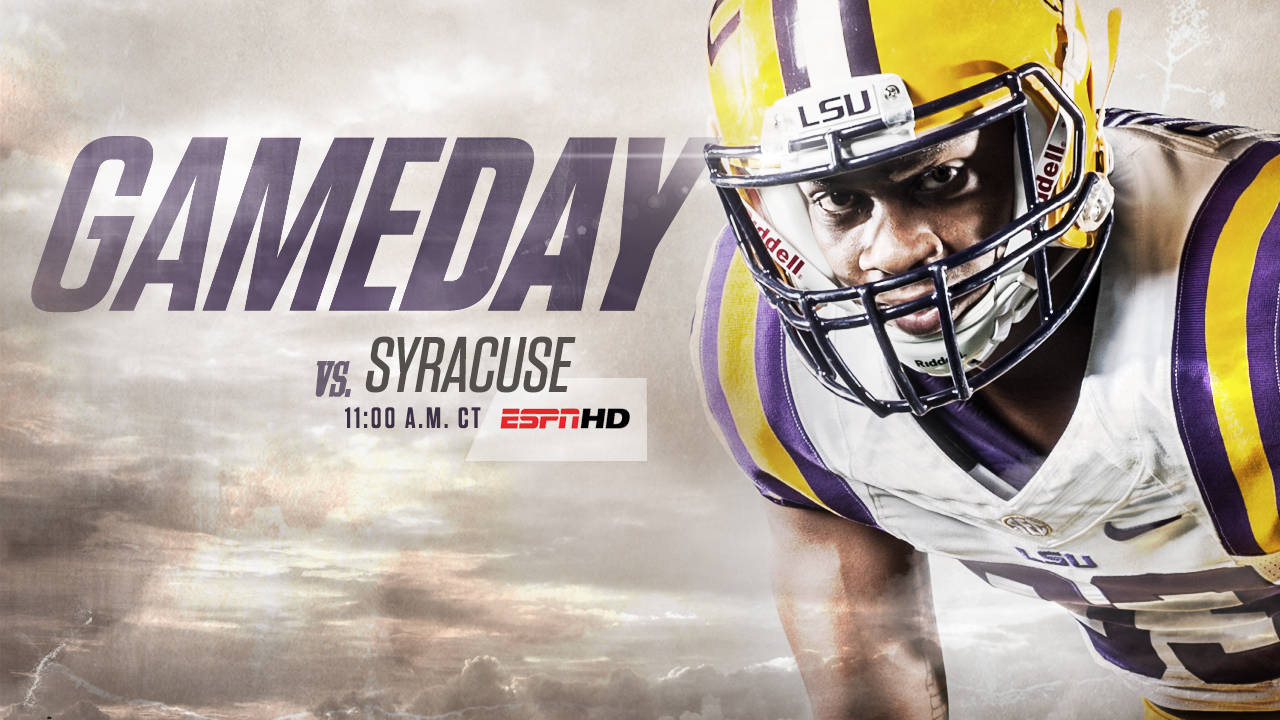 BATON ROUGE – LSU steps out of conference play for the first time this season on Saturday when the eighth-ranked Tigers travel to the Carrier Dome to face undefeated Syracuse.

Kickoff between the Tigers and the Orange is scheduled for 11 a.m. on ESPN where Bob Wischusen, Brock Huard and Shannon Spake will be on the call.

The game will also be broadcast on the LSU Sports Radio Network with Hall of Famer Jim Hawthorne calling the action in what is his 33rd and final season as the Voice of the Tigers. Hawthorne is joined in the booth by former LSU great Doug Moreau along with former LSU letter winner and special teams sensation Gordy Rush reporting from the sidelines.

LSU goes into the game with a 2-0 overall mark following last week’s 45-21 thumping of then-No. 18 ranked Auburn in Tiger Stadium. Running back Leonard Fournette caught the attention of the nation a week ago as he rushed for 228 yards and three touchdowns despite sitting out the entire fourth quarter.

“…talented team; well-coached team,” said LSU Head Football Coach Les Miles. “(Syracuse) Head Coach Scott Shafer, third season … Ex defensive coordinator, ex-DC at Michigan from 2008. Really he’s done a great job there. They’re 3-0. Off to their best start since 1991. Big overtime win against Central Michigan. I’m from the Midwest, so I know what a real quality MAC school is capable of. …for Syracuse to be in the position they’re in, they’ve earned it, and we respect them. We see them as a very, very good, very strong program.

“Now playing in their fourth straight home game in the Carrier Dome we would expect the crowd would be their biggest, loudest, that the environment would be what we’re used to: aggressive away stadium that benefits the home team and one in which we have to fight to make sure that we play well.

“(Syracuse) forced nine turnovers in three games. Really good up front,” Miles said. “They have real mobility. They get to the ball. It’ll be a challenge for us, and one that we’ll certainly look forward to in the preparation. The key for us to recognize (is) we’re in a good position. That position is going to depend on how we prepare for Syracuse and how well we play Saturday in New York. Our football team has to get this. If they do, we’re in good shape.”

Fournette will have the chance to show some of his talent in one of the nation’s media centers after his 3-touchdown breakout performance in the win over Auburn that earned him at least three national awards during the week. Brandon Harris continued to prove to be solid in the starting position and has helped LSU have no turnovers in the first two contests, something that happened for only the third time since 1959.

This marks the first season since 1991 that Syracuse has begun its season by winning its first three contests and will be looking to score its first win against a nationally-ranked opponent since a 45-26 win against No. 10 Louisville on Nov. 10, 2012.

Syracuse has shown an ability to have success stopping the run, averaging just allowing 46.7 yards a game, third nationally through the first three contests.

But the Tigers have shown their might and Orange quarterback Mahoney may be tested as LSU defensively as already registered eight saves with defensive tackle Davon Godchaux leading the way with 3.0. Linebacker Deion Jones (20 tackles, 1.5 TFL) and Kendell Beckwith (15 tackles) top the LSU defense that is allowing 20.0 points and 319 total yards a game.

After facing Syracuse, the Tigers will play their first non-conference game at home against Eastern Michigan at 6 p.m. on Saturday, Oct. 3 in a game televised by the SEC Network.