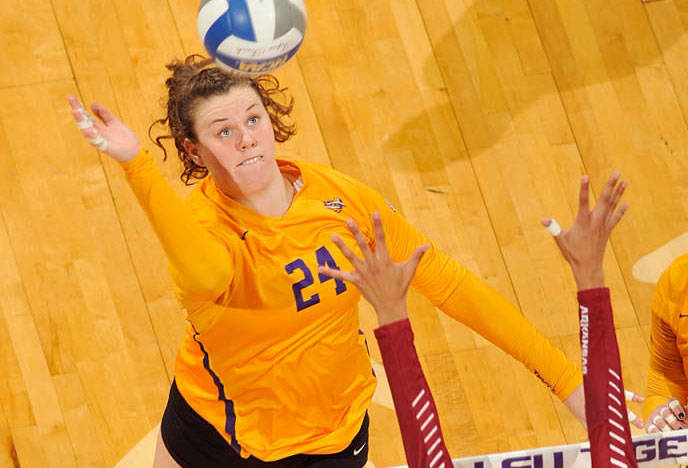 BATON ROUGE, La. – In the first nationally-televised match of the season, the LSU volleyball team helped put on a thriller in its Southeastern Conference opener on Wednesday night inside the Maravich Center, pushing the Arkansas Razorbacks to five sets before eventually falling 25-23, 26-28, 24-26, 25-20, 15-9.

With a history of long matches between them, the Tigers (4-8, 0-1 Southeastern) and Razorbacks (11-2, 1-0) did not disappoint as the two teams conceded every other set from the start with Arkansas taking the first and third, with LSU taking the second and forcing the fifth by taking the fourth. The match took nearly three hours to complete, with a tense fifth going to the visitors to end in front of 1,391 fans Wednesday night.

“Well I think we did some really good things and we defended one of the best middles in the league. She hit the 367 and had 17 kills but the first portion of the match we contained her and we made them do some different things,” head coach Fran Flory said. “Super proud of our effort. If our kids will fight that hard through that may sets this season is going to turn around really fast. This is one of the best teams in the SEC, just coming off beating Wisconsin which is the No. 11 team in the country so that’s a great effort by our kids.”

LSU had three players finish with double-digit kills on the night, with Cati Leak and Toni Rodriguez each having 15, as Leak had nine digs and two assists, while Rodriguez hit a blistering .314 with three blocks and two digs.

“We came off a good weekend so we definitely had some confidence in the beginning but they did too,” Lindelow said. “I think we just kind of lost it at the end.”

Katie Lindelow earned a double-double with her 17 digs and 12 kills against Arkansas, with Emily Ehrle having a season-best eight and match-leading seven blocks.

Cheyenne Wood led the setters with 30 assists, followed by Lindsay Flory with 14. Haley Smith tied Lindelow for the team lead in digs with 17 of her own, adding six assists and two service aces against the Razorbacks.

LSU finished the match stout at the net, finishing with 14.0 blocks as a team to Arkansas’ 9.0, as Ehrle, Lindelow, Rodriguez, Tiara Gibson and Flory each finished with multiple blocks on the night.

“As a freshman I don’t have the biggest role, but every time I step on the court I try to do my best and help the team as much as possible,” Rodriguez said.

Arkansas’ Victoria Pilar finished the match with 30 kills for the Razorbacks, earning a double-double with 19 digs, two blocks and service ace. Adrien Wohlschlaeger had 65 assists in the win for the visitors, earning 14 digs while stopping four shots. Okiana Valle led the match with 21 digs.

The Razorbacks shot out of the gate hitting .382 in the opening set, but even with that offensive fire power the Tigers were able to earn seven ties and three lead changes throughout the frame, especially late as both teams sat at a 23-23 stalemate. The Tigers were the first to get to the 20-point barrier leading 20-19, but Arkansas chewed its way through the minor deficit from that point, winning the set 25-23 after closing the first on a four-point run down 23-22.

Flirting with extra points in the opener led to just that in the second set, as LSU had the leg up on Arkansas hitting .238 with 15 kills and only five errors in the stanza. Ehrle and Leak each finished with four kills, with Ehrle hitting .444 with two blocks.

There were 15 ties and seven lead changes this go-round, with the action picking up deep into the set. Each combined to use all four of their timeouts from the 15-point mark on, with LSU calling its first down by two at 17-15, with Arkansas calling its first trailing 20-18 after a 5-1 Tiger run, and calling another after two more points to fall behind by four at 22-18.

The Tigers burned their final time out attempting to hold off the Razorback rally tied at 22. From there, the two teams traded points until at 26-26 a service ace by Mimi Eugene and an unforced Arkansas attack error knotted the match at one set a piece.

The break wasn’t kind to either side, as the two combined for 19 attacking errors in the third set alone, keeping the set close for much of its duration. The Tigers had the advantage, holding the lead for much of the set until faltering late. Leading 22-19, Arkansas fought back to tie the set at 22-22, but LSU got to set point first, getting stuck at 24 while Arkansas went on a three-point run to close out the set to go up 2-1, 26-24.

Hitting .282, its highest output of the night, was a catalyst for the Tigers to tie the set, paced by Rodriguez’s six kills and .417 average in the frame with a block. At one point LSU was leading by five at 16-11 and rolling. The Tigers led by as many as seven points in the set after a Rodriguez kill gave LSU a 20-13 advantage. The set wouldn’t come that easy as Arkansas started to find its rhythm offensively, but two timeouts halted the onslaught and a Gibson-Rodriguez blocks and another Arkansas error gave LSU the set 25-20 to send it to a fifth.

Unfortunately for the Tigers, the race to 15 points was made all the more easy by Arkansas’ .588 hitting clip in the fifth, powering home 11 kills to pull away in the end. Still, there were seven ties within the first 14 points, but from there Arkansas took control scoring four of the next five to take a 11-8 lead, going up 13-8 to force LSU into its final timeout, scoring just one more point in the match as Arkansas closed it out 15-9.

LSU will be back in action on Sunday afternoon, hosting the South Carolina Gamecocks at 1 p.m. inside the Maravich Center and streamed live on SEC Network+.