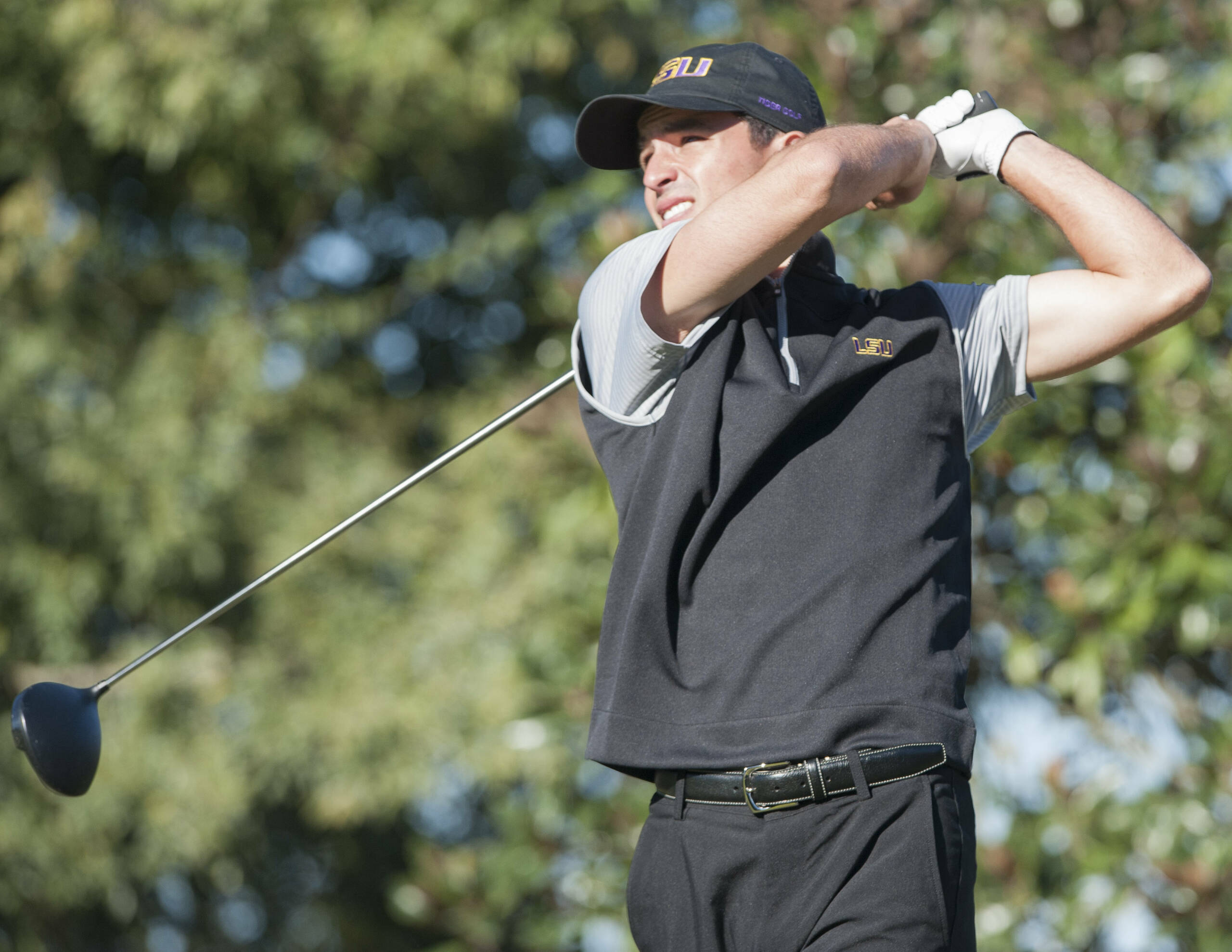 BATON ROUGE – With the 2015 fall season now in full swing for the defending national champion LSU Men’s Golf team, the Tigers will be back on the course this weekend with a return trip to Burlington, Iowa, where they look to defend their team title at the Golfweek Conference Challenge beginning in Friday’s first round at Spirit Hollow Golf Club.

The course will play to a par 72 and 7,223 yards for the three-day, 54-hole championship as tee times in Friday’s first round will begin at 9 a.m. CT. Saturday’s second round will also begin with tee times at 9 a.m., while Sunday’s final round is scheduled to begin with a shotgun start at 8:30 a.m. to decide the team and individual champions.

This marks the third-straight season in which the Tigers will represent the Southeastern Conference at the Golfweek Conference Challenge as they followed a fifth-place finish in 2013 with a victory last fall.

The Tigers were runaway winners of the Golfweek Conference Challenge team title a year ago when they won their first of a school-record five tournament titles in 2014-15, highlighted by a late-season sweep of their SEC and NCAA championships as the premier program in college golf. LSU eclipsed SMU by 14 shots on the final leaderboard with a winning score of 15-under par 849 in 2014.

The Tigers were led to victory by the top two finishers on the final leaderboard at last year’s championship as senior All-American Stewart Jolly scored a four-stroke victory over sophomore teammate Eric Ricard on the weekend while blistering Spirit Hollow Golf Club to the tune of a 54-hole score of 9-under par 207, including a 5-under 67 in the first round and 6-under 66 in the second round. Jolly actually won the individual crown for back-to-back seasons at the Golfweek Conference Challenge after also taking the title as a junior in 2013.

Ricard’s runner-up finish to Jolly proved to be his best finish of the 2014-15 season and best in 17 tournament appearances as an LSU Tiger as he fired a score of 5-under par 211 for the championship. That performance sparked a breakout sophomore season in which he was named a PING Honorable Mention All-American and Second-Team All-SEC performer.

Ricard is one of two Tigers returning to defend their team title from a season ago as he will be joined in the lineup this weekend by senior All-American Zach Wright, who tied for 13th place individually last year.

Wright is already off to a fast start in his senior season after tying for fourth place at the Carpet Capital Collegiate Classic two weeks ago where he broke par at 1-under 215 for 54 holes, including matching his career-low round of 6-under 66 in the final round at The Farm Golf Club. The Phoenix, Arizona, native has now earned eight top-10 finishes in his collegiate career, including LSU’s 2015 fall season opener.

The Tigers earned a fourth-place team finish in the 15-team field at the 27th-annual Carpet Capital Collegiate Classic in their season opener two weeks ago as freshman Sam Burns also cracked the Top 20 in his collegiate debut by tying for 19th place at 7-over par 223 in three rounds. Burns, the No. 1-ranked recruit in the country in the Class of 2015, is in the lineup once again for the Tigers at the Golfweek Conference Challenge.

Rounding out LSU’s lineup this weekend are two Tigers seeing their first action of the 2015 fall season as junior Rhyne Jones and freshman Nathan Jeansonne join Wright, Ricard and Burns in the defense of LSU’s team championship. Jeansonne is actually a high school teammate of Burns as he also signed with the Tigers as a Top 10 recruit nationally in the Class of 2015 last November.

The Tigers are among 15 teams from 15 different conferences nationwide that will be competing at Spirit Hollow Golf Club this weekend, including tournament host and Big Ten representative Iowa.

LSU is paired with Iowa and SMU in Friday opening round and will tee off from the front front nine beginning at 9:45 a.m. CT. Golfstat will have live scoring of the tournament through its website at http://golfstat.com, while Tiger fans can also follow all the action throughout the Golfweek Conference Challenge by following @LSUMensGolf on Twitter at http://twitter.com/lsumensgolf.