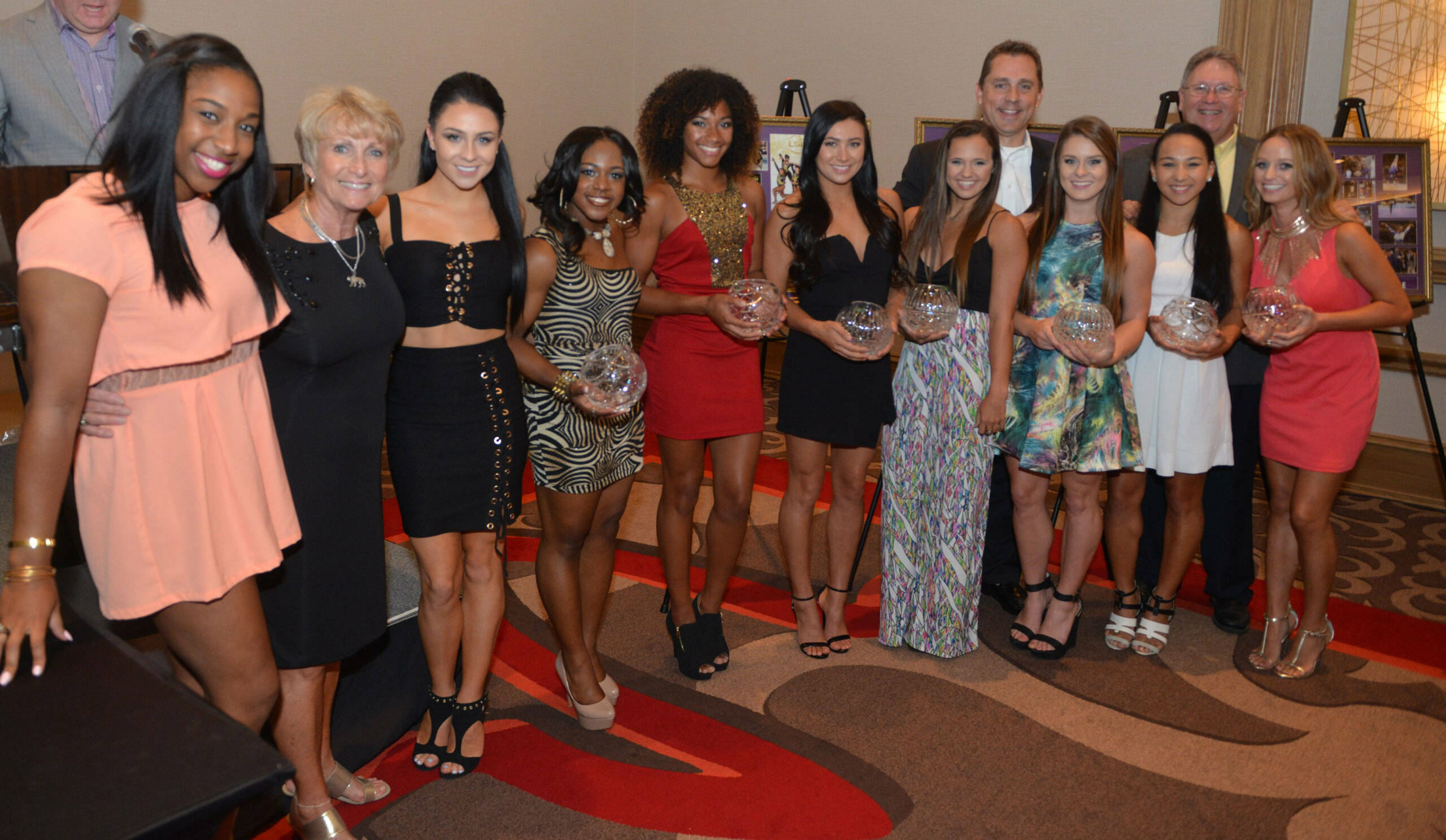 BATON ROUGE – The LSU gymnastics team gathered at the L’Auberge Event Center Wednesday night to celebrate the 2015 season and recognize all the team and individual accomplishments during the year.

In front of a great crowd of boosters and supporters, head coach D-D Breaux, associate head coach Jay Clark, assistant coach Bob Moore and volunteer assistant Ashleigh Clare-Kearney gave out awards, plaques and flowers to the gymnasts for their achievements in the classroom, competition arena and in the community.

The first award handed out was the National L-Club award presented to the captains for 2015. Outgoing seniors Rheagan Courville and Jessie Jordan were named the recipients of the award after they combined to compete in the all-around in an amazing 97-of -114 competitions in their careers.

The entire team was recognized for winning the Community Service Cup as the LSU sport that completed the most service hours per student-athlete on the roster. The team also won the Tiger Cup that is awarded to the LSU sport that has the highest total achievement in the areas of academics, community service and athletics.

Jordan was the recipient of the Community Service Award as she logged a team-best 42 hours of service in 2015 and directed the gymnastics team’s community service events throughout the year.

Shae Zamardi took home the Most Improved Award. In 2015, Zamardi was a regular in the uneven bars lineup, and she finished the year as a first-team All-American on the event.

The Dee Dee Fulmer Gilbert Coaches Award is presented annually to the gymnast that consistently demonstrates a strong commitment to academic and athletic excellence.

Courville, Hall and Jordan were honored for achieving a perfect 10.0 during the 2015 season.

That senior trio and Myia Hambrick were honored for earning All-SEC distinction as well as winning at least one SEC individual title in 2015.

LSU resumes fall practice Thursday as the Tigers continue preparations for the 2016 season.

Season ticket deposits are available online at http://lsul.su/1AHxy4K, and season tickets cost $25 for adults and $15 for youth ages 3-12.

Once again LSU will offer a free preview of the 2016 team by hosting Gymnastics 101 in the Maravich Center on Dec. 14 at 6:30 p.m. CT. Labeled a “Gymnastics Showcase,” Gymnastics 101 will provide fans a first look at the 2016 Tigers who will perform routines on all four events.