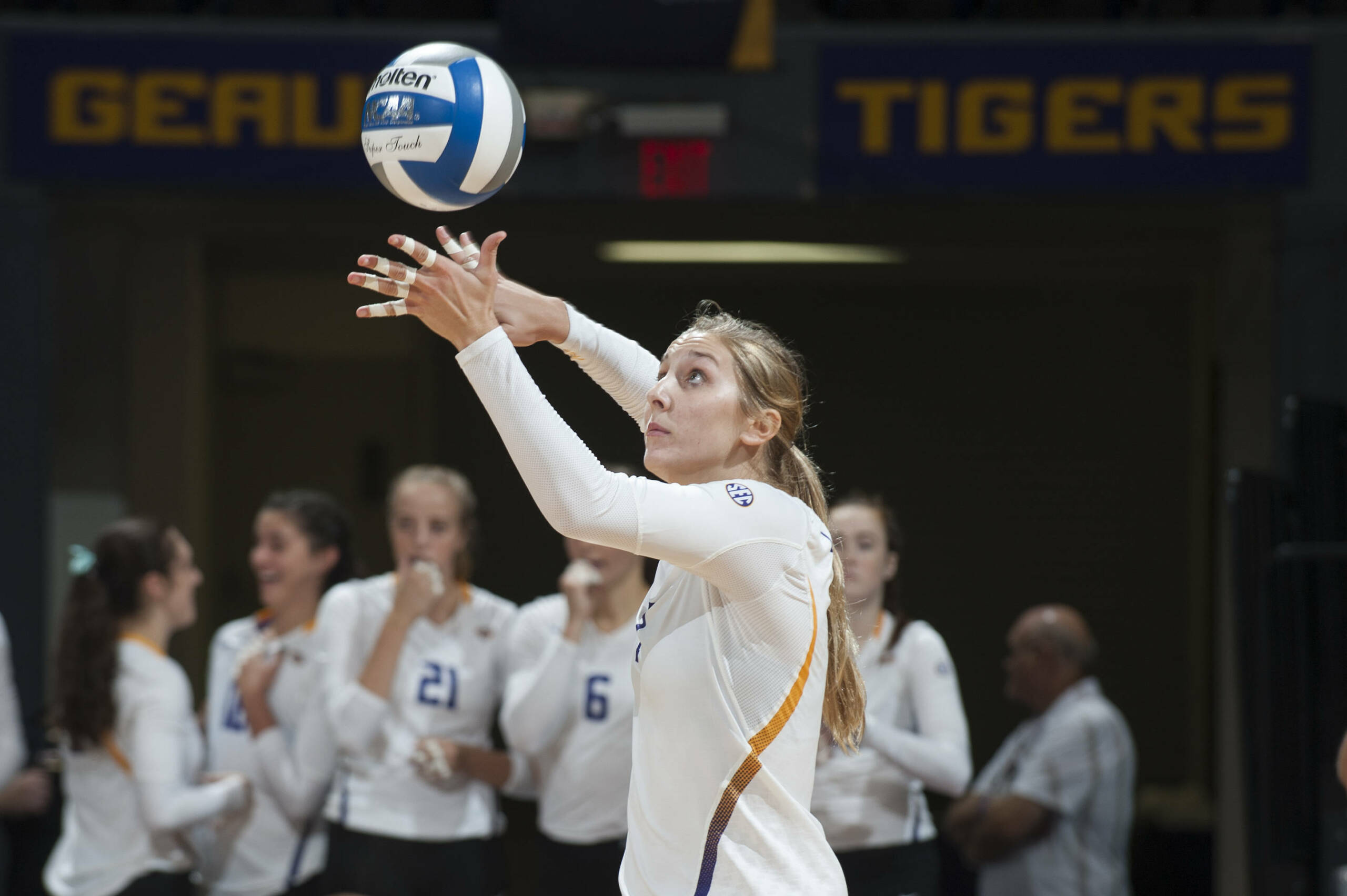 All home matches in the 2015 season are free to the public thanks to the “Geaux Free” program provided by The Advocate. Wednesday’s conference opener is the team’s annual Gold Match, where all fans are encouraged to come to the match wearing the color, with the first 750 students through the Maravich Center doors receiving the 2015 edition of the popular “Geauxld Digger” tank top.

For fans unable to make the contest against the Razorbacks, Sam Gore and Jennifer Hoffmann will call all the action for ESPNU from the PMAC, streaming online through WatchESPN for desktops, tablets, mobile devices and streaming players. Links to live stats as well as video will be available at LSUsports.net, with live updates during the match on the team’s Facebook and Twitter pages.

The Tigers head into the opening of SEC play with its confidence on the rise after returning home from New Mexico as the 2015 Days Inn and Suites Lobo Invitational Champions after sweeping its three opponents last weekend in Albuquerque. LSU earned sweeps of LIU Brooklyn and CSUN, before defeating the Lobos in a thrilling five-set affair to cap the weekend unblemished heading into the tilt with Arkansas Wednesday.

In arguably the team’s most consistent matches to date, LSU finished the weekend outhitting its opponents, while getting a gritty defensive performance all around that limited the trio of teams to a .111 hitting percentage, averaging 3.09 blocks per set with 34 as a group to the 20.0 for the other teams.

“I think the thing we were able to figure out was finding a way to stabilize our offense,” head coach Fran Flory said. “I think our defense got tougher last weekend, and that balance of our offense to defense is starting to improve and if it continues going forward we are going to be successful.”

One of the catalysts behind the stellar defense for the Tigers began with senior Haley Smith who was named the tournament MVP as well as earning SEC Co-Defensive Player of the Week honors on Monday after averaging 5.27 digs per set during the event. Smith, who has just a little more than 200 digs standing between her and the all-time digs record, earned 25 in the win over New Mexico in the finale and has six matches this year with 20-plus digs.

“Haley led the way, and our blocking improved which probably created the opportunity for her to be in the position she was this weekend,” Flory said.

Coming into the match with just one contest with double figure blocks to their credit, the Tigers left with three after setting the bar after each match. Earning 10.0 on Friday, LSU earned 11.0 in the first match on Saturday before stuffing 13.0 Saturday night to net a new season high. Finishing with 17 on the weekend, freshman Olivia Beyer has in just four matches jumped to the top of the leaderboard in blocks with 21, averaging 1.40 per set, with a team-leading five total on the solo end.

“I think we’re starting to get some consistency and reliability across the board, and I think Olivia has led that charge for us in the middle after the way she’s played,” Flory said.

Usually drawing the headlines and having two of its best attacking matches of the season, the LSU offense hit above .200 in consecutive matches, including hitting a team season-high .244 against the Blackbirds in the Lobo Invitational opener. The Tigers hit into fewer errors than their opponents in each of the three contests, hitting into a season-low 14 against LIU Brooklyn.

LSU’s trio of Cati Leak, Katie Lindelow and Cheyenne Wood each produced two double-doubles each, as Leak led the team averaging exactly four kills as she earned her 1,000th kill against New Mexico, while Lindelow was right behind averaging 2.91 kills per set and tied Leak with five service aces as both were named to the all-tournament team. Wood averaged 5.36 assists per set, earning her first 20-20 match with 20 assists and a career-high 20 digs against UNM.

The offensive lineup as a whole was on display for the team throughout the weekend, as five different players earned at least 10 kills, averaging 12.18 kills per set as a group on the weekend.

“We understand that we have a lot of depth and that it’s going to be about the next person in,” Flory said. “The lineup isn’t exactly the way we want it yet, but we have a lot of people that can come in and contribute in many different ways.”

Arkansas comes into this weekend with a head of steam after winning two-of-three matches last weekend in Omaha, including topping a highly-ranked Wisconsin team in five sets in its final match of the weekend. The Razorbacks are 10-2 overall having swept half of their opponents already this season.

“They are one of the hottest teams in the SEC after they weekend they had, so we know this is going to be a big challenge for us,” Flory said. “It’s different Arkansas team than we’re used to seeing, they’re physical, have one of the premier players in the league and brought in a quality transfer and is a team we are going to have to study and really prepare for.”

LSU and Arkansas have played some thrilling matches over the past few seasons, none more exciting than the two last year both in Baton Rouge and Fayetteville. Although the Tigers have won the last three against the Razorbacks, it hasn’t been easy as all three have gone five sets including the two wins for LSU last season.

AT A GLANCE – Arkansas