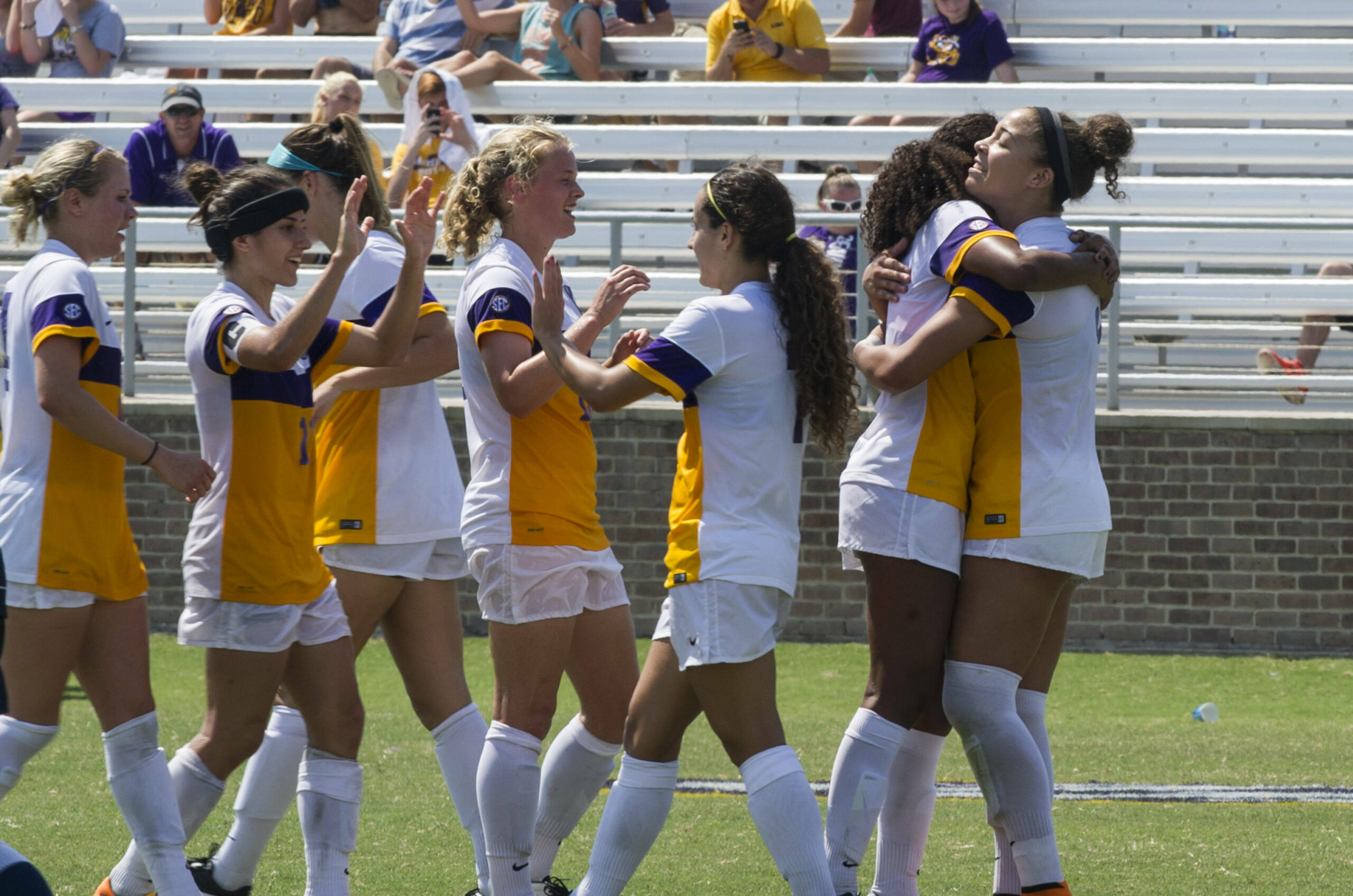 BATON ROUGE – After Marquette took an early lead through Ashley Handwork in the 13th minute of play, the Tigers scored five goals without reply with senior Alex Arlitt, junior Summer Clarke and sophomore Jorian Baucom each finding the scoresheet in LSU’s 5-1 win over the Golden Eagles on Sunday afternoon at the LSU Soccer Stadium.

The Tigers (7-1-2, 1-1 SEC) remained unbeaten in their eight matches played in Baton Rouge this season with a 6-0-2 mark through Sunday’s non-conference finale, including a perfect 4-0 mark for four matches held on Sunday afternoons during the 2015 season. LSU has outscored its opponents by an 11-1 margin on Sunday afternoons in Baton Rouge this season.

They also picked up their first ever win against an opponent from the Big East Conference while leveling their all-time series with Marquette (3-4-2) at 1-1, including a 2-1 win by the Golden Eagles a year ago.

“We’ve really progressed as a team during these non-conference games while really playing against some great teams,” said LSU head coach Brian Lee. “When you play teams like Duke, Minnesota, Indiana, Marquette and others, who all might very well be in the NCAA Tournament, and you win those games, then you start to feel very good about where you are as a team going into SEC play.

“SEC play has already started, of course, but we feel great about where we are right now and prepared for what’s to come for us over the next couple of months going into the rest of SEC play and the postseason.”

Handwork put the Golden Eagles on top in the opening stages of Sunday’s contest after she was played through the LSU defense by teammate Liz Bartels and finished with her left foot inside the right post from about 10 yards for her first goal of the season at the 12:10 mark of the first half. That’s all the scoring the Golden Eagles would muster while finishing the day with 10 shots and four shots on target.

Arlitt quickly drew the Tigers level just four minutes after Handwork’s breakthrough when she split the Golden Eagle defense on a darting run through the penalty area and buried a diving header from Clarke’s cross to the back post to tie the score at 1-1 in the 17th minute. Marquette goalkeeper Amanda Engel was no match for the pace of Arlitt’s header as the Tiger team captain found the back of the net inside the left post.

Arlitt’s leveler was the ninth goal of her collegiate career and first goal in more than two years when she last found the scoresheet with two goals in a 6-0 shutout of Louisiana-Monroe on Aug. 27, 2013.

“You always have to trust Summer (Clarke) when she gets the ball in those positions. She’s just so dangerous going forward,” Arlitt said of Clarke’s run in the build up to the goal. “I don’t know if they (Marquette) even saw me running through or not, but I just tried to get to the back post as quickly as I could. Summer put a great cross in that I just had to get my head to.”

Clarke then put the home side in front midway through the first half in the 28th minute with her first of two goals on the afternoon and sixth goal on the fall as she took possession in midfield, sprinted past Marquette’s right back into the left side of the area and poked home what proved to be the game-winning goal from 10 yards at the 27:56 mark.

“They were playing with a three back right off the bat, which we kind of knew they would do coming into the game,” Clarke said of Marquette’s defense. “Brian (Lee) was just telling us, like, ‘There’s two of you (Clarke and Baucom) against their three, just feel free to go at them and attack them. Make them work and make them feel the heat.’ That was kind of our plan all day today.”

After assisting Arlitt’s opener and scoring the second herself, Clarke completed a hat trick of sorts when she drew a penalty after being played through the Marquette defense by Baucom for a breakaway. That’s when Engel was sent off by referee Chris Mercado as she came charging off her line and tripped Clarke to deny the LSU striker a clear goal-scoring opportunity on the run. Baucom stepped up to the penalty spot and finished past substitute goalkeeper Sloane Carlson in the 56th minute for her ninth goal of the season.

The Golden Eagles struggled to regain a foothold in the match while being forced to play the remaining 35 minutes with just 10 players, an advantage on which the Tigers capitalized with two more goals.

Senior midfielder Fernanda Pina won possession following a Marquette goal kick in the 73rd minute and immediately played Baucom behind the Golden Eagle back line for an easy one-on-one finish past Carlson for her second goal for the day and 10th goal of the season at the 72:15 mark of the second half. With two goals on the afternoon, Baucom surpassed her return of eight goals in 20 appearances as a freshman a year ago.

But it was Clarke’s second goal on the afternoon that put an exclamation point onto the end of a dominant display by the Tigers when she took a touch from Gabriela Maldonado‘s square ball in midfield, drove forward and unleashed a bullet from 30 yards that found the top-right corner of the net past a helpless Carlson in the 73rd minute, just 40 seconds after Baucom made it 4-1 on the day.

Clarke matched her season highs with two goals and five points on the afternoon as she emerged trailing only Baucom on the team’s scoring charts this season with seven goals and 17 points to her credit.

The Tigers certainly boast one of the nation’s most feared front lines this season as Baucom and Clarke have now combined to score 17 goals and 39 points in the team’s 10 matches as they reached the midway point in the season on Sunday afternoon. Baucom might be the nation’s leading goal scorer when the NCAA’s scoring charts are updated on Monday after tying for the No. 2 spot with eight goals entering the weekend.

“I think it improves with each game,” Baucom said of the chemistry she shares with Clarke. “We’re always constantly working on it at practice. Having this preseason is just ultimately the main reason why we have such a strong chemistry. I think we’ve come to the point where we know each other’s strengths and know how to utilize those when we play on the field.

“I know Summer needs through balls because she has great speed and can make it there. Whereas she can cross it to me in the air or play it to my feet and I’ll hold it up and play it off to her or whatever we need to do. We kind of just counter off of each other, and it compliments on the field.”

With an eight-game unbeaten run at 6-0-2 in non-conference play on their resume, the Tigers will look to remain on the winning track when they return to SEC play next weekend with a road swing to Auburn on Friday night and Ole Miss next Sunday afternoon in a pair of matches scheduled to kick off at 7 p.m. CT on the SEC Network+.