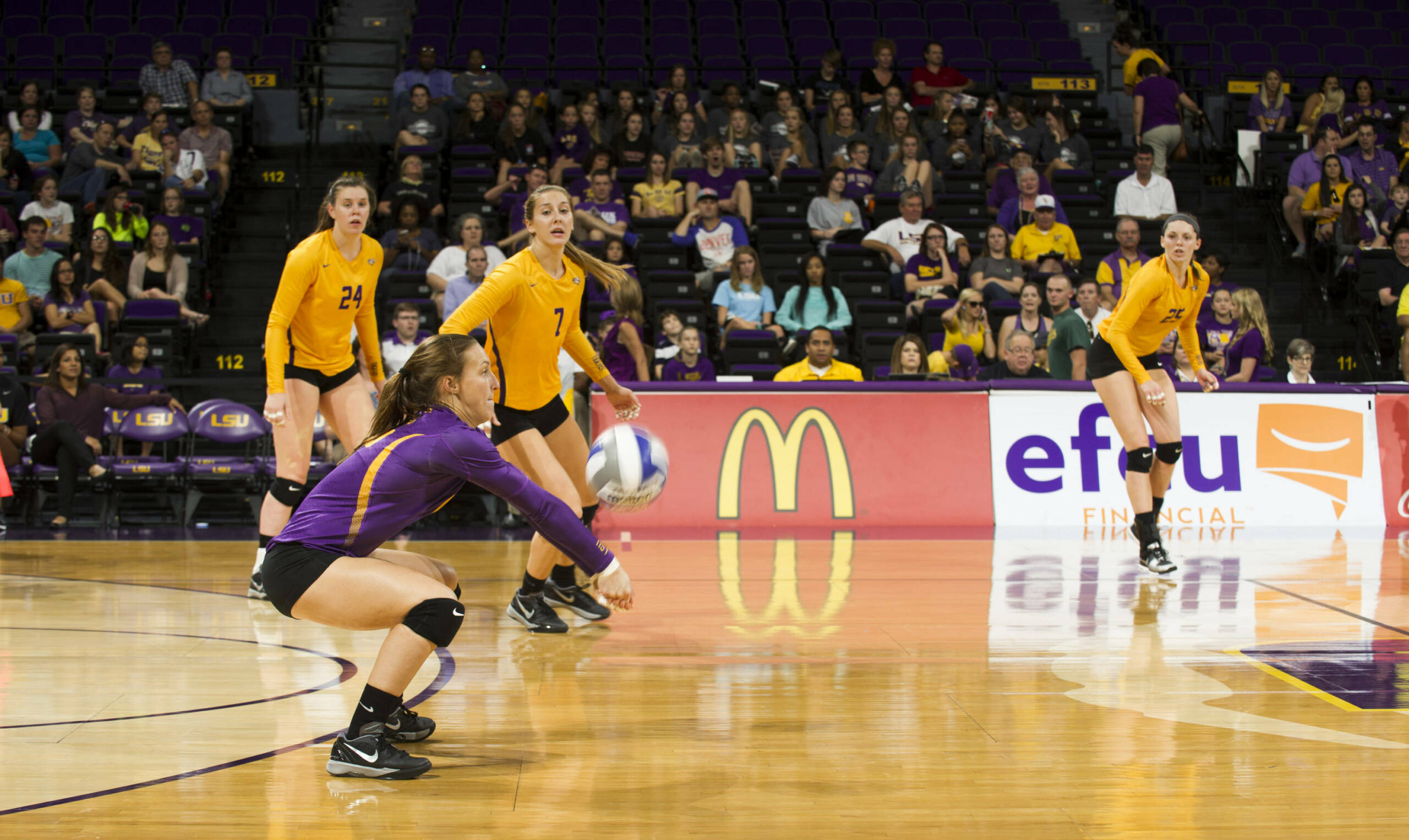 ALBUQUERQUE, N.M. – After taking the first two sets and looking for the sweep, the LSU volleyball team would be tested in a big way as the squad would drop the next two and hold on to win a thriller in five sets over the New Mexico Lobos 25-23, 25-20, 18-25, 23-25, 15-11 to claim the 2015 Days Inn and Suites Lobo Invitational title Saturday night inside WisePies Arena.

In a hostile environment and looking to keep its winning streak alive, the Tigers (4-7) pulled off the upset by fending off a raucous rally by the Lobos (7-5) late, getting the plays it needed to earn the victory and push its streak to three in the process by sweeping both of its matches on Saturday.

LSU was led on the attack by senior Cati Leak who finished with 12 kills to become the 21st player in program history to reach 1,000 in a single career. Leak earned the double-double as she finished with 17 digs, while adding four blocks, three aces and two assists. Katie Lindelow powered home 10, netting a double-double for herself with 15 digs, with a service ace and an assist, as she and Leak were both named to the all-tournament team.

The most valuable player of the tournament was senior defensive specialist Haley Smith who finished the night leading all players with 25 digs, while also serving up three assists. Cheyenne Wood produced her first 20-20 match of the season, earning 20 assists and 20 digs with a service ace. Lindsay Flory had 13 assists to go along with her new career-best four blocks and two kills.

The blocking force of the Tigers proved to be too much for the Lobos on the night, setting a new season high with 13 as a squad, led by freshman Olivia Beyer who earned a new season best with eight, which is also the highest for any individual on the team this season. Leak and Flory each finished with four, while Emily Ehrle had three.

Devanne Sours led all players with 22 kills for New Mexico, adding along 10 digs for the double-double. Hannah Johnson had 46 assists for the Lobos and led the team with 26 digs in the loss.

LSU and New Mexico opened the match trading points for the first 10 leading to a 5-5 stalemate early as the two groups were looking to figure the other out. But at that 5-5 tie, the Lobos scored three consecutive points to take an 8-5 lead over the Tigers to bring the home crowd to life, but not before LSU went on a three-point swing of their own to tie it back up, this time at 8-8.

Down by two at 10-8, a kill from Rodriguez pulled LSU within one of the home side, with a back row kill from Eugene knotting it back up at 10-10. A kill from Beyer gave the Tigers their second lead of the set, with a Eugene service ace putting the team up two. Although LSU would take the lead, it would be short-lived as New Mexico went into the media timeout leading 15-13.

With the lead in hand, the Lobos got stuck at the 15-point mark, allowing LSU to mount a comeback after an attack error, Leak kill and service ace made it 16-15 Tigers. UNM tied it back up the next point later at 16-16, but another kill, Flory solo block and unforced Lobo error put LSU up three heading into a New Mexico timeout.

Although LSU got to 20 points first, New Mexico stormed back claiming seven of the next 13 points out of that timeout, forcing LSU into using both of its timeouts now down 23-22. The New Mexico lead was snuffed after the second break, as LSU got the next two points out and got a Leak kill to take the opener 25-23.

New Mexico began to hum offensively in the second set, to the tune of nine kills within the first 10 points and a .400 hitting clip as a group. While LSU was also hitting well seeing an average above .300 for much of the early portions of the frame, the Tigers could never seem to get any closer than a couple of points of New Mexico for key stretches.

Trailing the Lobos by three at the media timeout, the Tigers corralled five of the next six points to stifle New Mexico and take a 17-16 lead after an unforced UNM error forced the home team into a timeout. Another unforced error out of the break made it 18-16, with a Lindelow kill pushing the lead to three at 19-16. New Mexico called its second timeout as LSU ran its run to 9-1 seeing its lead stand at five at that point, going on to take the set 25-20.

Even with a 2-0 lead and much of the momentum on their side, the Tigers found themselves needing to climb out of another big hole early to New Mexico, falling behind 6-2 in the early stages of the third. Much like it had done most of the match, LSU did just that, going on a 7-2 run to take a 9-8 lead over the Lobos to fight back.

That run was highlighted by a six-point swing for the Tigers during that streak, as a Flory kill made the score 11-9 in favor of LSU. With their backs against the wall, New Mexico fought back taking the lead briefly at 13-12, but the Tigers would be the one to go into the media break leading 15-14. Out of the intermission, another unforced Lobo error made it 16-14 LSU, with a kill extending it to 17-15.

The upper hand for LSU didn’t last long as the Tiger two-point lead evaporated over the course of a 4-0 run for New Mexico to give them a lead they would never relinquish in taking the third set 25-18.

With the energy starting to shift to the home standing Lobos, New Mexico bullied its way to a 6-0 lead over the Tigers to open the fourth set, as the New Mexico crowd found its way back into the match pushing UNM on. New Mexico went on to lead by as many as seven up 9-2, reaching double-digits up 10-5.

LSU made a bit of a rally, scoring five of the next eight points to pull within three, including a four-point rally included to make it a 13-10 contest. That sparked help ignite a fire for the Tigers that forced New Mexico into a timeout, scoring three of the next four after that to pull within one after a Lindelow kill at 14-13. The Tigers were eventually able to tie the set at 15-all, taking its first lead right after at 16-15.

It was a new match after that, with the two sides staying neck-and-neck, until a pair of errors by LSU gave New Mexico a 20-18 lead and sending LSU into a timeout. Two errors by the Lobos tied the set at 20 and rapidly drawing to its conclusion. Knotted at 21, an LSU service error and UNM kill gave the Lobos a two-point lead and in the end enough to take the fourth 25-23 and force the deciding fifth set.

With everything on the line, the two sides took to the court for the match-deciding frame and worked their way to a pair of ties early. However at 2-2, a block from Ehrle and Flory, solo block from Ehrle and an unforced Lobo error gave LSU a 5-2 lead and sending UNM into a timeout. The two teams switched sides with LSU leading 8-3, but when the teams switched so did the momentum as New Mexico clawed back to pull within one at 9-8 after a 5-1 run.

The Lobos took the lead by scoring the next two points to go up 10-9 and take its first lead of the set, kick-starting a thrilling back-and-forth between the squads as each flirted with leads. Tied at 11, an unassisted kill by Beyer and a solo block from the freshman on consecutive plays gave LSU a 13-11 lead with UNM calling its final timeout. By then it was too late, as LSU closed out the match getting the next two points to win 15-11.

LSU returns to action on Wednesday, opening Southeastern Conference play against the Arkansas Razorbacks at 8 p.m. inside the Maravich Center. The match will be televised live on ESPNU.