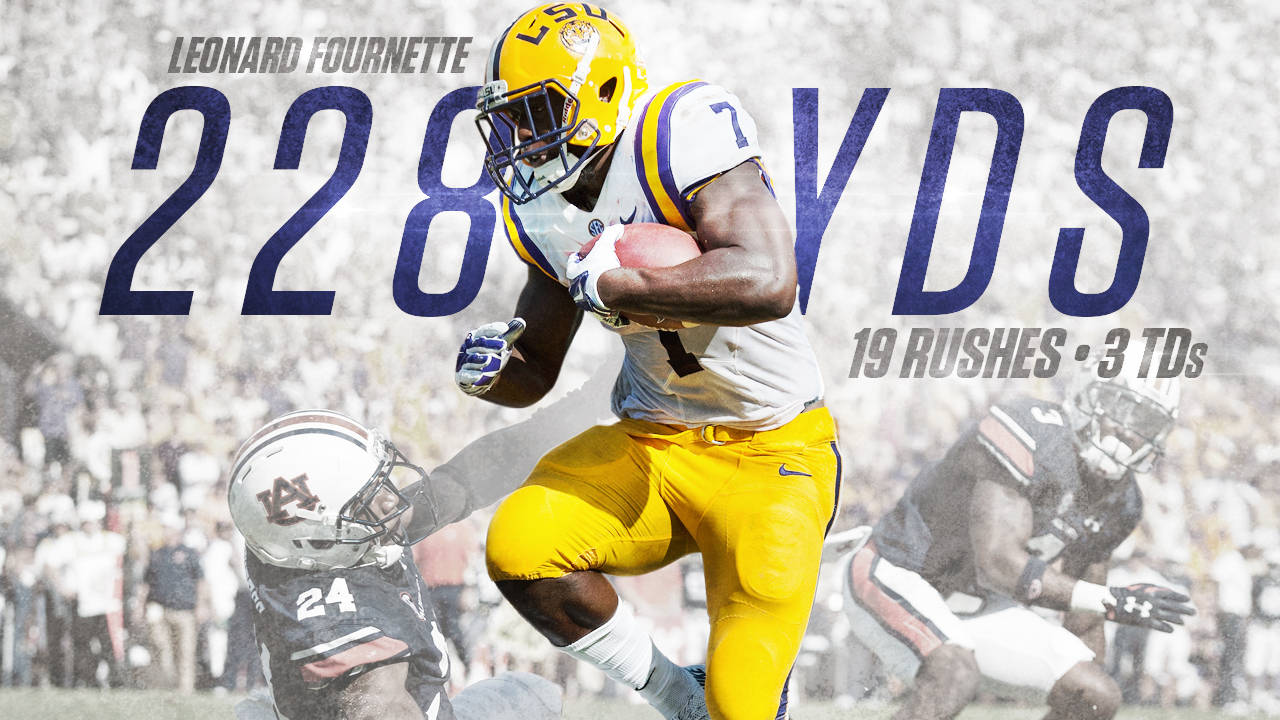 BATON ROUGE — Leonard Fournette had 228 of LSU’s 411 rushing yards, as the 13th-ranked Fightin’ Tigers battered No. 18 Auburn, 45-21, on Saturday afternoon in Tiger Stadium.

The homestanding Tigers – which beat Auburn in Tiger Stadium for the eighth-straight time – take to the road to face Syracuse (3-0) on Sept. 26 at 11 a.m. CT in New York. The game will be televised by either ABC or ESPN.

Though the LSU rushing attack went six deep with double digit yardage, it was the spinning, leaping, bone-crushing sophomore in the No. 7 jersey who stole the show. Fournette would have had a shot at a school record for rushing yards (250 yards by Alley Broussard versus Ole Miss in 2004) if the game was ever in doubt.

Instead, after scoring his last touchdown with a 1-yard dive with 4:14 left in the third quarter, Fournette only saw the field one more time – when LSU lined up against a potential onside kick with 5:47 left in the fourth quarter.

Fournette needed only 19 carries to amass the seventh-highest single-game rushing yardage in LSU history. His 12.0 yards per carry is a school record.

LSU’s total rushing attack posted the 10th-most yards in school history and the most since Kevin Faulk – who was a guest captain on the 20th anniversary of the “Bring Back the Magic” game – led the Tigers to a 433-yard evening against Houston in 1996. It was also LSU’s second-biggest rushing total against an SEC opponent.

Behind Fournette, quarterback Brandon Harris had a career-best 66 yards with two short touchdown runs on eight carries. His logest run was 33 yards and he was not sacked.

After the Sept. 5 canceled game against McNeese wiped out his Tiger Stadium debut, Harris completed 12-of-17 passes for 74 yards without an turnover for the second-straight game.

Linebacker Deion Jones led LSU with eight tackles including half a sack, while Davon Godchaux added a pair of sacks. Safety Jamal Adams recorded his first interception as a Tiger. LSU had seven tackles for loss including five sacks and a forced fumble at the Auburn 5-yard line.

The Tigers drove 75 yards in four plays to take a 7-0 lead with 13:19 remaining in the first quarter. Harris culminated the march with a two-yard TD keeper. The key play in the drive was a 71-yard dash by Fournette on the first play from scrimmage.

LSU extended its lead to 14-0 with 1:39 left in the first period on a one-yard scoring pass from Harris to tight end Colin Jeter. A 27-yard run by Harris on third and seven at the Auburn 27-yard line highlighted the march, which covered 78 yards on 13 plays.

LSU dominated the first quarter, rolling up 152 yards in total offense on 17 plays while limiting Auburn to 32 yards on 13 plays. Fournette rushed for 83 yards on six carries in the first period.

Adams created the Tigers’ first turnover of the season with an interception of Auburn quarterback Jeremy Johnson pass at the LSU 28-yard line with 14:49 left in second quarter. The pick was the first interception of Adams’ LSU career.

Trent Domingue‘s 32-yard field goal with 6:54 remaining before halftime gave LSU a 17-0 advantage. The Tigers methodically drove 65 yards on 11 plays as Domingue, junior, connected on the third field goal of his career.

Fournette’s 40-yard scoring run capped a 95-yard, six-play scoring drive that gave LSU a 24-0 lead with 2:10 remaining before intermission. A 33-yard run by Harris on third and three from the LSU 12 sustained the march.

Johnson got Auburn on the board on the Plainsmen’s first drive of the second half as he scampered 65 yards for a touchdown, narrowing the deficit to 24-7.

LSU answered quickly, however, as Fournette capped a six-play, 64-yard drive with a 29-yard touchdown run to give the Tigers a 31-7 advantage at the 10:56 mark of the third quarter. The score put Fournette over the 200-yard mark for the afternoon, increasing his rushing total to 227.

Defensive tackle Frank Herron sacked Johnson at the 5:04 mark of the third quarter, causing a fumble that Herron recovered at the Auburn five-yard line. The sack was the first of Herron’s career.

LSU capitalized two plays later when Fournette dove over from the one-yard line, pushing the Tigers’ lead to 38-7.

Johnson hit wide receiver Melvin Ray with a nine-yard TD toss with 1:03 left in the third period, capping a 59-yard, six-play march to pull Auburn back within 24 points.

Harris scored on a one-yard keeper with 11:23 left in the contest to increase the margin to 45-14. Freshman running back Derrius Guice sparked the drive with a 29-yard dash to the Auburn one-yard line, as LSU executed a nine-play, 75-yard march.

Auburn added the game’s final touchdown on a 10-yard pass from Johnson to D’haquille Williams for the final margin, 45-21, with 5:57 left to play.

A final look at # 13 LSU’s 45-21 win over #18 Auburn. LSU has now won eight straight over Auburn in Tiger Stadium. pic.twitter.com/Cg8FDPpBIK