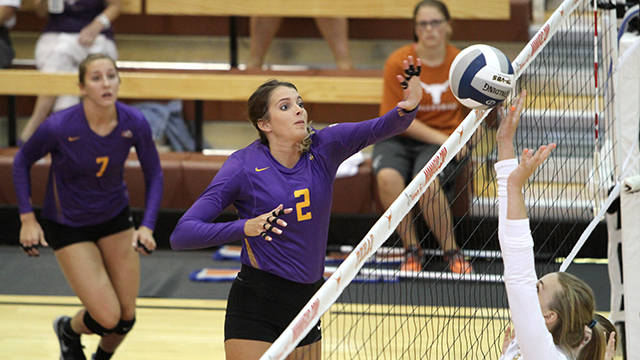 ALBUQUERQUE, N.M. – Looking to earn its second sweep of the season on Saturday morning, the LSU volleyball team went toe-to-toe with a scrappy CSUN Matador squad that fought off match point three times before eventually succumbing in the end as the Tigers won 25-21, 25-21, 31-29 inside The Pit in Albuquerque.

In the first of two matches for the team in their final non-conference weekend of the season on Saturday, the Tigers (3-7) battled with the Matadors (1-10) throughout the three-set affair, with the two sides accounting for a combined 31 ties and 16 total lead changes throughout. In the third set alone, the two sides played to 15 ties and seven lead exchanges, leading to the highest-scoring set for LSU this season.

Cati Leak led all players with 18 kills, earning a double-double with 10 digs to go along with her two service aces and two blocks. The senior hit .349 in the match, committing just three errors, as the Tigers as a whole hit .244.

Katie Lindelow finished second with 10 kills, also having two aces as she and Leak accounted for four of the team’s six in the match.

Lindsay Flory led all players with 19 assists in the win, tacking on three kills on four attempts with no errors, one dig and one block, while Cheyenne Wood had 13 with three digs.

Senior Haley Smith earned a match-high 23 digs and earned four assists, while sophomore Kelly Quinn earned a new career-high 13 digs for the Tigers in the contest with two assists.

Where LSU really shined was at the net as the squad earned its third double-digit blocking match of the season and its second in a row, finishing with 11.0 to CSUN’s 5.0. Leading the charge was senior Emily Ehrle who finished with a career-high tying six, followed by Lindelow with five which tied her career high. Olivia Beyer had four, while Toni Rodriguez had three and Leak had two.

Aeryn Owens led the Matadors with 10 kills, while Erin Indermill had 16 assists and Katie Sato had 19 digs for CSUN.

The entire first set proved to be a literal stalemate throughout the exchange, with both teams having leads evaporate at different points and deep into the opening salvo. By the time the first timeout was called in the first set there had been 13 draws and eight lead changes alone, as with the first tied at 20-20, a CSUN attack error and a Katie Kampen service ace gave LSU a two-point lead forcing the Matadors into that timeout.

CSUN stole a point, but gave it right back after a service error to give LSU a small cushion. A combo block from Ehrle and Lindelow put LSU on the cusp of taking the set, and even after the Matadors had numerous attempts rebuffed at the net on the next play, they still hit into a block, this time with the waiting hands of Flory to snuff the attempt closing the set in favor of the Tigers at 25-21.

The Matadors claimed six of the first eight points to open the second set to earn a four-point advantage over LSU a set in, opening the frame hitting .333 as a group through the early goings. By the time the Tigers called their first timeout, CSUN had taken three of the next four after that putting LSU into a 9-3 hole early.

LSU’s short break seemed to do the trick as the squad posted the next four points thanks to two unforced Matador errors, an ace by Lindelow and an unassisted kill by Flory to cut the CSUN lead to two and forcing their bench into a timeout. That quartet of points proved to be a pivotal stretch for both sides in the set, as the Tigers were beginning to find their rhythm while the Matadors were slowly beginning to lose grasp of the hot start they began with.

From that timeout, LSU went on to outscore CSUN 10-5 and force the Matadors into their final timeout of the frame now trailing the Tigers 17-14 and LSU beginning to roll. A kill by Ehrle helped continue that push for the Purple & Gold out of that break, with a service ace by Leak making it 19-14. By the time CSUN was able to figure it out it was mostly too late as after cutting LSU’s lead to three, LSU would get an Ehrle kill to get to set point, and then watch as after a kill the Matadors would serve into the net to make it 2-0 Tigers.

Two sets down, all LSU needed to do was to start a match playing with the same pace that it finished with in the other two, getting just that to open the third as LSU broke a 3-all tie by scoring five of the next six to take an 8-4 lead capped by two consecutive CSUN unforced errors.

However, The Matadors regrouped quickly and started to fire on offense forcing LSU into tough spots and chipped away at the lead quickly enough by outscoring the Tigers 9-4 to take a 14-12 lead and change the entire dynamic of the set. Up two at 15-13, the Matadors were starting to cruse, but not before LSU regrouped, scoring three straight points to go up 16-15 punctuated by a Leak kill.

CSUN got the next point to tie it at 16-16, but that would the last point for a while as consecutive blocks and back-to-back kills put LSU up four amid a Matador timeout. LSU would need to call a timeout of its own as the gritty Matadors scored four of the next five to make it a one-point affair at 21-20, keeping it close before taking the lead at 24-23 and sitting on set point.

However, the Tigers dug deep and after their final timeout got a kill from Lindelow to tie it at 24, as an attack error by CSUN forced the Matadors into their final timeout with LSU at set point. CSUN tied it at 25, but not before another Leak kill gave LSU set point again up 26-25. The Matadors fought it off again with a kill to make it 26-26.

The tide turned as CSUN got to 27, with Ehrle needing a kill to tie it up right after. Another Matador kill gave the visitors the lead, with Leak getting a kill to make things all square. An attack error for CSUN gave LSU set point again up 29-28, with CSUN breaking in again to make it a 29-all affair.

Like clockwork, another Leak kill gave the Tigers the advantage, this time being able to end the marathon with a Rodriguez kill to secure the sweep and give LSU the victory.

LSU closes out non-conference play with a match against the New Mexico Lobos at 8:30 p.m. CT in WisePies Arena Saturday night.