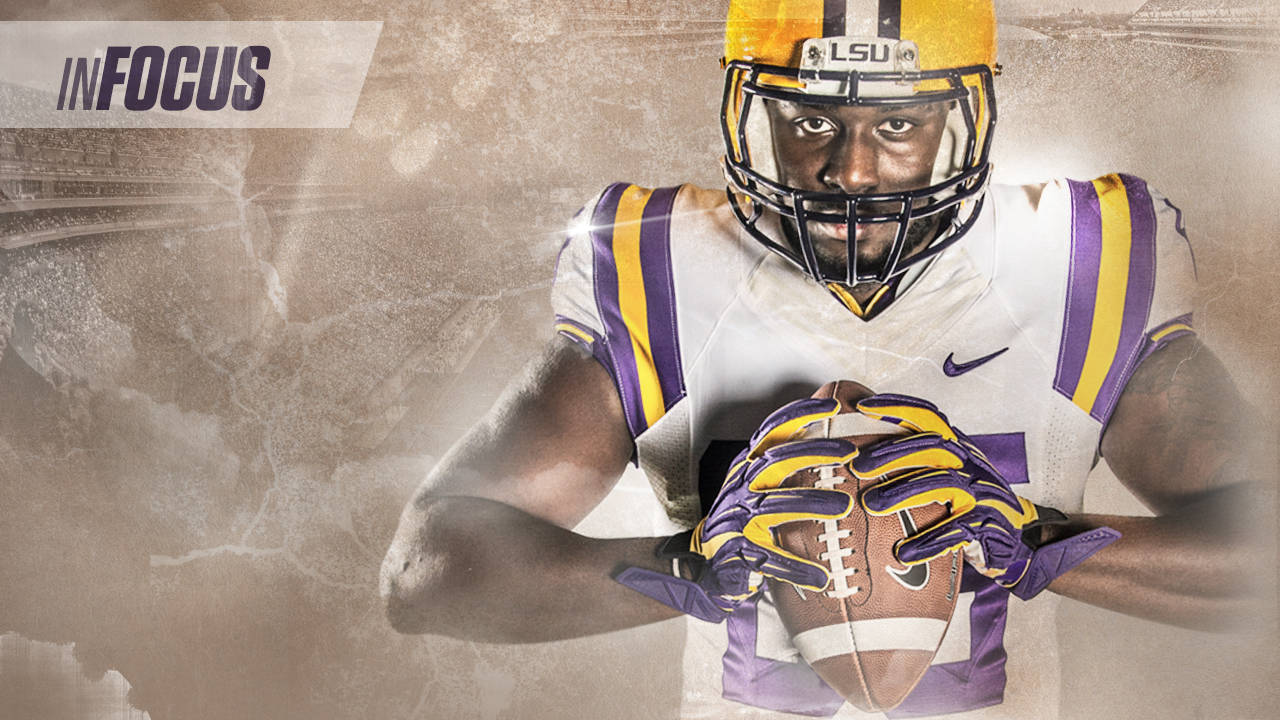 His mother, Rita Jarrow, has never missed one of his games or a walk down Victory Hill prior to a home game. She serves as his extra coach and his encourager. Gordon says his mother is his motivation.

“Throughout my whole life she hasn’t missed anything I’ve ever had,” Gordon explained. “She’s been at every game, home or away. I can tell you what she’s wearing; I can hear her over 102,000 people.”

While he may be a mama’s boy at heart, when he’s on the field, he’s known as “The Bull.”

His physicality and aggressiveness in practice and during games led to the nickname that former LSU offensive lineman Trai Turner gave him during his freshman campaign.

“It’s like he’s always angry and takes it out on the other team,” junior wide receiver Travin Dural explained. “I like it. He’s very aggressive. He plays with a lot of passion, and he doesn’t like to lose. He’s a guy who uses his emotion to fuel him throughout the game. “

Gordon is primarily a blocking tight end who is continuing to evolve into a pass catcher. Over the years, he’s embraced his role, paving the way last season for 1,000-yard rusher Leonard Fournette.

“Everybody wants his name in the paper, but I understand that there’s only one ball,” Gordon said. “Everybody can’t have the ball. I live for the plays that you don’t see in the newspaper that help a team win.”

During his sophomore year, he collected six receptions for 88 yards, including a 16-yard catch in LSU’s fourth-quarter game-winning drive against Arkansas and a 22-yard pass for a first down in the Alabama contest.

His longest career catch was a 36-yard reception during the 2013 victory over Texas A&M in Tiger Stadium, a moment Gordon considers one of the best of his career.

“It was electrifying,” Gordon expressed. “You know, when you catch the ball and you’re running around the field, and you hear those 102,000 fans, screaming and yelling for you, it’s exciting.”

That was the moment it hit Gordon that he achieved a life-long goal of wearing the purple and gold of LSU.

Growing up in Edgard, La., right down the Mississippi River from Baton Rouge, Gordon grew up watching his cousins, defensive end Tyson Jackson and fullback Quinn Johnson, play for the Tigers.

Always wanting to follow in their footsteps and learn from his cousins, it motivated Gordon and gave him the determination to ensure he achieved his goal to transition from a powerhouse high school program like John Curtis to a dominant program in LSU.

“My family is full of big, diehard LSU fans. I always knew this was where I would come growing up,” Gordon laughed, explaining that he had to stay close to home to be near his rock, his mother.

Throughout high school, Gordon started all four years and played offense and defense, and loved never having to come off of the field.

However, his focus shifted to offense and he carved out a name for himself among the tight ends. During his freshman season at LSU, upperclassmen Chase Clement and Travis Dickson took him under their wing, developing him into the leader that he is today among the tight ends.

He earned a starting role his sophomore year, and had started 25 games prior to the beginning of the 2015 season.

Gordon elaborated, “It’s an honor that the coaching staff trusts me to be a starter and to be one of the leaders on this team and teach the younger guys some of the things that Chase and Travis taught me when I was younger.”

He has embraced his role as a leader and is always helping someone on and off the field, leading by example with his mindset at practice.

Junior tight end DeSean Smith has learned from him and looks up to him as both a leader and a friend.

“The way he comes out and the way he takes care of his business, he’s definitely a great player. He’s a great friend, and when we are on the field and it’s time for business, you learn a lot from him,” Smith said.

At the end of the day, Gordon cherishes his moments on the field after learning that it’s all about having a good time while striving for a win.

Gordon plans to graduate in May 2016 with a bachelor’s degree in sport administration.

“My mom’s always telling me to keep my head straight, stay focused and never forget why I came here—to get my degree. Hopefully, God blesses me to go to the NFL. If not, we will go from there, but I will definitely have my degree.”