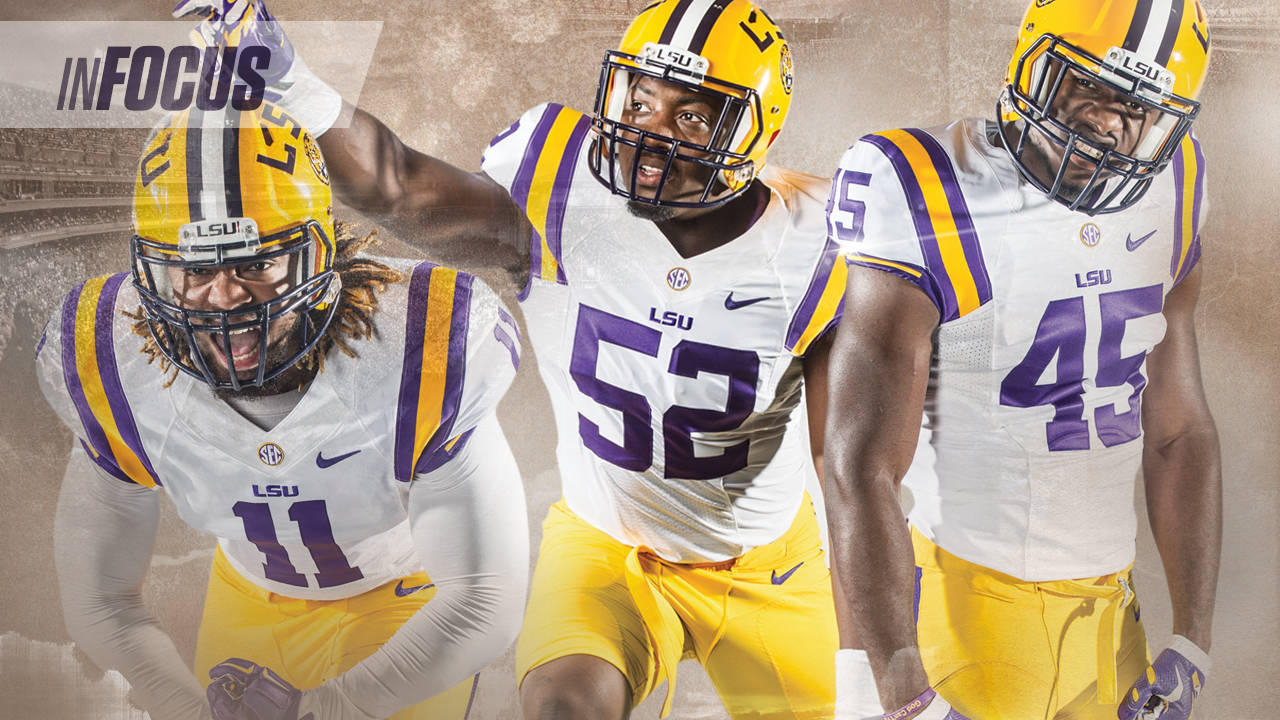 A quarterback gets the glory, a running back gets the crowd’s cheers, but the unsung heroes of a football team can be found not with the ball in hand but leading by example as they serve as the cornerstones of the defense.

LSU linebackers Deion Jones, Lamar Louis and Kendell Beckwith are the core of the LSU defense and embody the characteristics necessary to be successful on the field. Although they only make up three of the 11 defensive players, when the ball is snapped and the play begins, they are there to dictate what the rest of the defense will do.

The newly inaugurated owner of jersey No. 18 for the Tigers, junior cornerback Tre’Davious White, recognizes this.

“All of them are fast, physical and smart. They can pretty much do anything on the field and they know what everybody is supposed to do around them, so they make the game so much easier for the whole defense,” said White. “They have high football IQ and I feel like with them in the middle, it makes our defense so much better.”

With a new defensive coordinator this season, adjustments had to be made by a veteran crew, but because of coach Kevin Steele‘s instant connection with the linebackers, the shift was made seamlessly. His attention-to-detail coaching style has improved all three linebackers’ performance tremendously.

“He came in and told us what we were going to do,” Beckwith, a junior middle linebacker, said.  “He’s just really good and we bonded immediately, so there really hasn’t been much of a transition at all.”

Steele’s impression on the three individually has been appreciated as well. Beckwith has become more vocal, Jones makes sure his eyes are zoning in on what he needs to see and Louis’ overall attention to detail has improved.

These young men are known for their massive presence on the field, but also for their smooth and nimble movements. In order to be successful, they must be able to hit hard, move fast and make quick decisions.

“People really underestimate those guys. They’re probably the unsung heroes of our defense,” senior offensive tackle Vadal Alexander said. “All three of them are extremely athletic and they are really smart guys. There are no better linebackers in the country, in my opinion.”

Both sides of the ball recognize this chemistry the linebackers have developed during the offseason. For Beckwith, Jones and Louis, the confidence they have in one another to pick up what they miss keeps them united as a single force. Offensive players like fullback John David Moore see their capabilities on a whole different level.

“As a group they hawk to the ball,” Moore said. “It’s definitely a challenge, and you know, going against them all preseason camp, I’m able to be confident in my own abilities and say if I can go up against those guys, I can go against anybody.”

Beckwith finds satisfaction in this as well.

“I’m secure on both sides,” he said. “You’ve got two physical fast guys that are giving you 100 percent effort every time they go out on the field, so I know if I just so happen to screw something up, they have my back.”

Last year, Beckwith emerged as a starter seven games into the season after seeing field time at linebacker, defensive end and on special teams.

“I was just being patient and waiting on my moment,” he explained. “When I got it, I definitely took advantage of it. It really helped me out this year, having that experience under my belt.”

After the loss last season of linebacker Kwon Alexander to the NFL Draft, Jones has had to step into a new role. The team has an overall confidence in Jones’ skills and readiness to become a starter. Having played minutes in every game since his freshman year, he knows what is expected. His quickness and physicality keep the line strong and ready for anyone that might try to break through.

“I know I had some big shoes to fill,” Jones said. “Kwon is like my brother and I talk to him almost every day. He’s encouraging me and telling me how it is on the other side (in the NFL). It’s just been fun, and I was looking forward to this opportunity since the end of last season. We’ve been doing pretty well so far this season.”

For others like Louis, the NFL was an option at the end of last year, but he decided to stay to finish out his senior season. As a senior, he has a commitment to fill and a duty to help the less experienced players mature in their game.

“We can always build our stocks individually as far as the NFL, but it’s good to come back and finish what we started,” Louis explained. “Those guys depend on us just like we depend on them, and if you’re not an automatic first-round pick, you can always help yourself by staying, especially at an institution like this.”

It is an encouragement to the rest of the defense to see the hard work and dedication of these three key players. The one fluid movement they create when working together sets the tone for the players around them, casting an overall attitude of success.

“I feel like we have a group of vets that have been in a lot of situations in the game, know what the coaches want and know how the game goes,” White said. “I feel like they’re very smart and they put themselves in great positions to make plays.”

There is a fire lit in three these men to rise to the top this season and perform to the expectations of their coaches, their peers and the standards set by one another. Much like the rest of the team, the linebackers are taking it game-by-game and expect to see their hard work pay off in big ways.