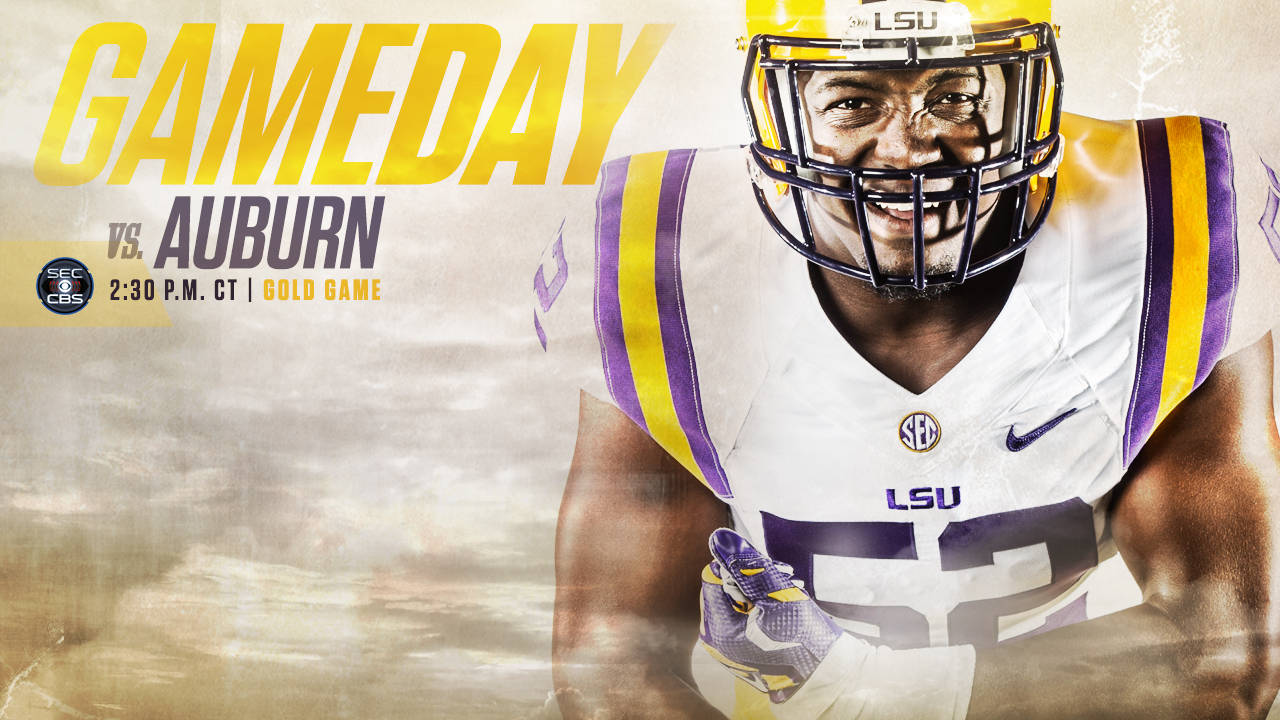 BATON ROUGE – Brandon Harris will be out to extend an 11-game winning streak by LSU quarterbacks making their first Tiger Stadium start when the 13th-ranked Tigers host undefeated and 18th-ranked Auburn.

Kickoff between LSU and Auburn is scheduled for 2:30 p.m. in a sold out Tiger Stadium. The game will be televised on CBS with Verne Lundquist, Gary Danielson and Allie LaForce on the call.

The game will also be broadcast on the LSU Sports Radio Network with Hall of Famer Jim Hawthorne calling the action in what is his 33rd and final season as the Voice of the Tigers. Hawthorne is joined in the booth by former LSU great Doug Moreau along with former LSU letterwinner and special teams sensation Gordy Rush reporting from the sidelines.

LSU brings a 1-0 mark into the contest following last week’s season-opening win over Mississippi State. The Tigers held off a fourth quarter Bulldog rally and then survived a missed last-second field goal to win, 21-19, in Starkville.

Auburn had its hands full with FCS opponent Jacksonville State, winning 27-20 in overtime. Auburn opened the year with a 31-24 victory over Louisville in Atlanta in the Chick-fil-A Kickoff Classic.

“We’ve had a good week of practice and our players are excited about the opportunity to be back in Tiger Stadium,” LSU coach Les Miles said. “We learned a lot about our football team last week against Mississippi State. We cost ourselves over 200 yards of offense and at least 17 points with penalties a week ago. We were able to watch the film of last week’s game and make corrections.

“We played hard from start to finish last week, but we just made some first-game mistakes. Our preparation has been good and the players have been focused on the challenges that Auburn presents us. They are a very good football team. We are expecting a typical SEC battle with Auburn.”

Saturday’s game will be the first home start for sophomore quarterback Harris, who made his first career start a year ago at Auburn. Last week, Harris completed 9-of-14 passes for 71 yards and rushed for another 48 yards in leading the Tigers to the win over Mississippi State.

Harris and the Tigers go into the Auburn game looking to extend the streak of consecutive wins by LSU quarterbacks in their first Tiger Stadium start, a stretch that goes back to when Matt Mauck beat The Citadel in 2002. Every LSU quarterback making his first Death Valley start since then has been victorious.

Harris and LSU will continue to try to be balanced on offense, but the Tigers won’t shy away from giving Auburn a heavy-dose of Leonard Fournette. Last week, Fournette rushed for 159 yards and three touchdowns on 28 carries, all career-highs, on his way to earning SEC Offensive Player of the Week honors.

When the Tigers got to the air, Harris’ top target last week was that of junior Travin Dural, who had four catches for 15 yards. Dural also had an 89-yard TD run brought back due to a penalty. Five different players caught passes for LSU last week, including two by tight ends.

In week one, LSU pounded out 266 rushing yards against the Bulldogs, the 28th time under Miles that the Tigers have gone over the 200-yard mark (LSU is 25-3 in those games).

Defensively, the Tigers were impressive a week ago, limiting Dak Prescott to a career-low minus-19 rushing yards, and the Bulldogs to just 43 yards on the ground, in the win. A year ago, Mississippi State rushed for 302 yards in its 34-29 win over LSU in Tiger Stadium.

LSU used its powerful defensive line and explosive linebackers to bottle up Prescott on the ground and contain the Bulldog rushing attack, holding Mississippi State to the fewest rushing yards of any team in a road/neutral site game since Sept. 4, 2010 when LSU limited North Carolina to 24 rushing yards.

Both teams will try to beat the heat as well as each other as the game time temperature is expected to be near 95 degrees, potentially making it one of the hottest games in Tiger Stadium in the last 40 years.

That’s a fact not lost on Miles who, along with LSU’s athletic trainers, strength and conditioning coaches and staff nutritionists, has preached hydration to his team all week.

“We are preparing for Auburn and the heat,” Miles said. “The key piece is hydrating your body all week and at the cellular level. You can’t just hydrate moments before. It takes time to get in the body and have an impact.”

Traditionally known for Saturday Nights in Death Valley, LSU is riding an impressive win streak during day games in Tiger Stadium. Heading into the contest against Auburn, LSU has won 11 straight home day games dating back to 2008, a streak that includes a 45-10 LSU victory against the Tigers from the east in 2011.

A victory would also give LSU a leg up in the SEC Western Division race with a 2-0 record, but as history has shown (see the 1988 “Earthquake Game” or “The Night the Barn Burned” in 1996), fans can expect the unexpected when LSU and Auburn get together.

Regardless of anything else, Miles and the Tigers have their focus set squarely on Auburn and a Top-20 matchup in Tiger Stadium.

“This is kind of an historic rivalry,” Miles said at his weekly press luncheon. “We look forward to playing Auburn. Auburn is a very, very quality team with deep-rooted SEC history with LSU.”

For links to live stats, GameDay timeline and other pertinent items, fans can check out www.LSUsports.net/gameday.