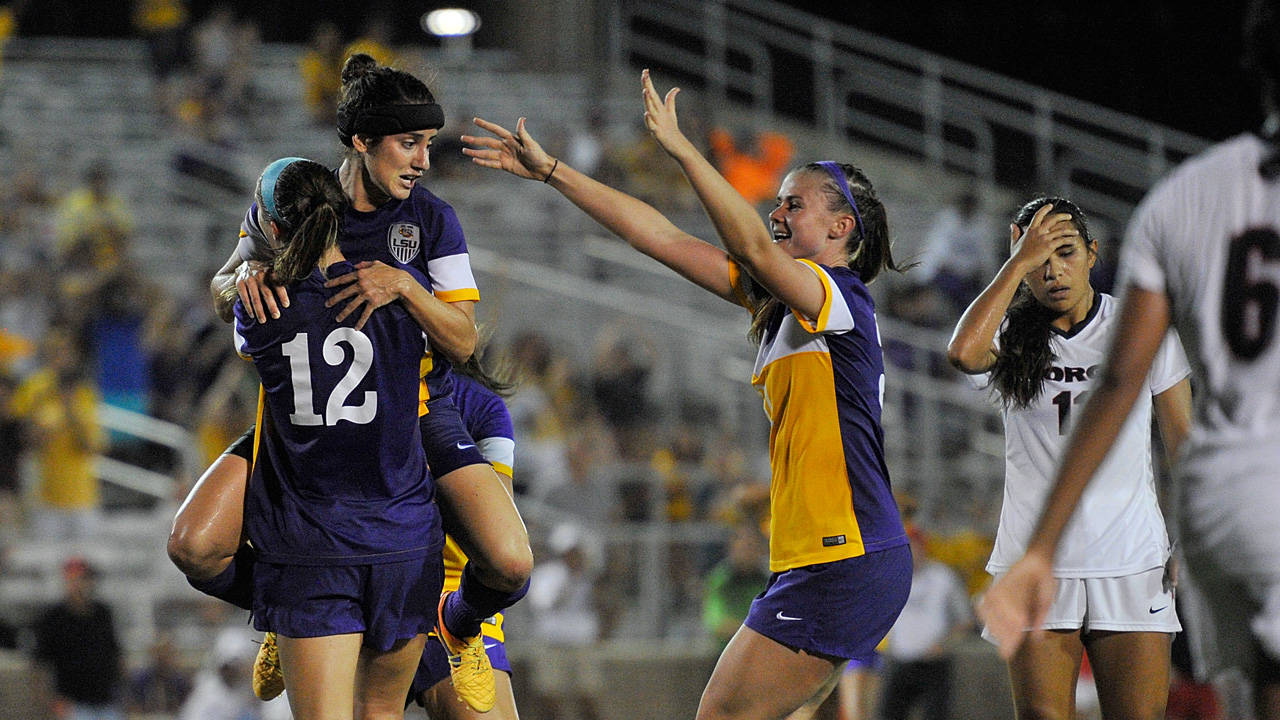 BATON ROUGE – Senior midfielder Natalia Gomez-Junco scored her first two goals of the season in the final 20 minutes of the second half as the Tigers overcame a two-goal deficit to the visiting Georgia Bulldogs and scored a 4-3 win for their first victory in Southeastern Conference play on Thursday night at the LSU Soccer Stadium.

The Tigers (6-1-2, 1-1 SEC) found themselves two goals behind in the match while facing their largest deficit of the 2015 season when first-half substitute Kelsey Killean redirected Lauren Tanner’s square ball across the six-yard box into the back of the net to put the Bulldogs (1-6-1, 0-2) up 3-1 in the 31st minute with her first goal of the campaign.

The home side regained the momentum before the break when sophomore midfielder Debbie Hahn cut the deficit in half with a stunner from distance for her second goal of the season on 37 minutes.

After winning possession near the center circle, Hahn made a brilliant solo run through the Georgia defense to the top of the penalty box where she put the ball on her left foot and fired home a curling effort from the edge of the area that sailed inside the top-right corner of the net to pull the Tigers back to within 3-2 going into halftime. The Tigers outshot the visitors by an 11-6 margin in the opening 45 minutes of the contest.

The Tigers seized the momentum again after taking the second half kickoff as senior striker Summer Clarke immediately went on the attack down the right flank and created chance after chance for her side from some brilliant one-on-one attacking that wreaked havoc on the Bulldog defense for the remainder of the match.

Clarke’s effort nearly resulted in an equalizer inside the first minute of the second half when her end-line cross found Hahn’s feet near the penalty spot, but her shot blazed over the bar from about 12 yards.

It wasn’t until the clock neared 20 minutes to play that the Tigers found their equalizer from Gomez-Junco’s right boot as she lined up a 25-yard free kick outside the right edge of the penalty area and lashed home her first goal of the season inside the right post to draw level at 3-3 at the 68:12 mark of the second half. She then buried the winner 10 minutes later from a failed clearance by the Georgia defense as she fired home a half volley from 20 yards inside the left post past a diving Bulldog goalkeeper Louise Hogrell.

Gomez-Junco’s double snapped a three-game unbeaten run for Georgia in the series while handing the Tigers their first win over the Bulldogs since a 2-1 home win during the 2011 season en route to the second-place finish in the final SEC standings that year. LSU also improved to 6-9-2 all-time against Georgia, including a 5-4-2 mark in 11 seasons under head coach Brian Lee.

“I’ve practiced it thousands of times, and it’s just kind of like a routine, kind of like it’s automatic. It’s having the confidence that I’ve practiced them, and knowing that it will go in,” Gomez-Junco said of stepping up to a free kick. “I stepped up to it and knew I was confident that I had done the work. I just focused on being calm during the game.

“I feel the same happiness whenever anyone scores a goal,” Gomez-Junco added of her feeling when scoring the winning goal. “I celebrate each goal the same. It was just so awesome getting that win tonight.”

It was Clarke who opened the scoring for the Tigers just six minutes into the match when she again beat the Bulldog defense to the end line and played the ball back across the six-yard box in the direction of Fernanda Pina running through the area. The Bulldogs failed to clear and Clarke pounced on the rebound with a close-range effort that found the net at the 6:07 mark for her fifth goal of the season.

Georgia then took the lead from a stunning sequence that saw the visitors score goals just 22 seconds apart in the 13th and 14th minutes of the first half. Becca Rasmussen found the scoresheet on 13 minutes when she finished a square ball across the box by Andie Fontanetta from five yards out to draw the Bulldogs level. Georgia then gained possession from the ensuing kickoff and went on the attack as a Bulldog was taken down in the area to set up the go-ahead spot kick, which Bella Hartley converted inside the right post for her second goal of the season at the 13:02 mark.

Killean then extended Georgia’s lead to 3-1 on the night less than one minute after entering the game as a substitute when she redirected Tanner’s pass into the back of the net with just over 30 minutes played.

“It was a situation we haven’t really been in yet this year,” Clarke said of facing a two-goal deficit in the match. “We were in that situation at times last year, and we never really came back from it. So, when we were in the locker room, we were just like, ‘We just need to keep creating chances, getting opportunities and the goals will come.’

“We just needed to keep working and keep our minds in the game and not get down on ourselves. In the locker room at halftime, the vibe was really good and we were really positive we would come back.”

The Tigers turned in one of their most impressive offensive performances of the season in Thursday’s 4-3 win over Georgia as they outshot the Bulldogs by a 20-7 count in the game, including a 9-1 shot advantage over the final 45 minutes of action. Gomez-Junco led the way with a season-high seven shots and four shots on goal on the night, while Clarke added five shots and three shots on target herself.

“We’ve been waiting for that situation here this season. We’re not inviting it, and we don’t want it, but it’s something the coaches have talked about a lot being down to a good team early in the game,” Lee said. “It’s a case of how will we respond being down one goal early in the game, not two. It went to two, and I thought the team really stayed composed and still played within themselves.

“We had a little tactical shift that affected the game some. They always take changes so well, it’s a huge advantage for us. They stayed composed and started creating chance after chance after chance. To be fair, that’s probably the best we’ve attacked all season. It was very fluid and we were always dangerous tonight.”

The Tigers are ready to wrap up a three-game homestand with their non-conference finale on Sunday afternoon when they welcome the Marquette Golden Eagles to Baton Rouge for a match that is scheduled to kick off at Noon CT on the SEC Network+. LSU will be seeking a measure of revenge after falling by a score of 2-1 at Marquette during the non-conference season a year ago.

Proud to have Canada’s World Cup star @allyshachapman back with us tonight! Was the 2011 #SEC Defensive POY at #LSU! pic.twitter.com/r5OrjZuFxi