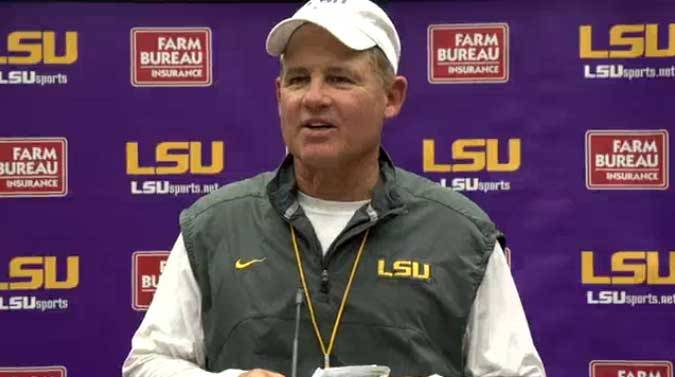 BATON ROUGE – LSU has spent all week getting ready for two things on Saturday: the Auburn Tigers and the heat.

LSU welcomes 18th-ranked Auburn to Tiger Stadium on Saturday afternoon for a key Southeastern Conference contest. Temperatures are expected to be hovering in the low 90s at kickoff.

LSU goes into the game with a 1-0 mark as the Tigers opened their season a week ago with a 21-19 win over 25th-ranked Mississippi State in Starkville. Auburn, a preseason Top 10 team, survived an overtime scare from FCS opponent Jacksonville State last week, winning 27-20. Auburn is 2-0.

“We are preparing for Auburn and the heat,” LSU coach Les Miles told the media after Wednesday’s practice. “The heat is normal around here this time of year. You get hot just walking to your car, let alone at practice. We’ll be ready for the heat. The key piece is hydrating your body all week and at the cellular level. You can’t just hydrate moments before. It takes time to get in the body and have an impact.

“We will be talking about hydration certainly by the end of the week here, heavily on Friday and certainly on Saturday.”

The Auburn contest will be the first game in Tiger Stadium for LSU since the Alabama contest in early November a year ago, one of the longest spans of time for the Tigers to go without a home game.

“We have a good week of practice,” Miles said. “We have to put different segment of our game plan in different days. Each day our players have to accommodate to some new and some old things. I felt they did a good job.

“They are excited to play and look forward to playing in Tiger Stadium. They don’t care what time it is or frankly who it is that we are playing.”

A week ago, the Tigers went into the Mississippi State game having had their season-opener against McNeese State canceled after just nine plays because of weather. That left LSU without a first game to work out through some mistakes, both on the field and in the film room.

“There are so many telling points when you are playing in a game that’s on the line,” Miles said of having film to watch on his team after the two-point win over Mississippi State. “There are certain situations where the film depicts a guy under the scrutiny of play. It’s paramount when making a starting lineup, making adjustments and game decisions.”

Saturday’s game will also serve as the first Tiger Stadium start for sophomore quarterback Brandon Harris. Harris, who had his first career start last year at Auburn, completed 9-of-14 passes for 71 yards and rushed for another 48 yards in LSU’s win over Mississippi State.

LSU quarterbacks in their first Tiger Stadium start have won 11 straight games, a streak that dates back to 2002 when Matt Mauck beat The Citadel in what was his first start in Death Valley.

The Tigers will practice again on Thursday followed by a walk-through on Friday afternoon.

Ty Davis-Price posted the greatest rushing performance in school history on Saturday, but he didn’t want much of the credit.
Davis-Price Sets Record in 49-42 Win Over Florida