Volleyball Falls To Hurricanes in Four 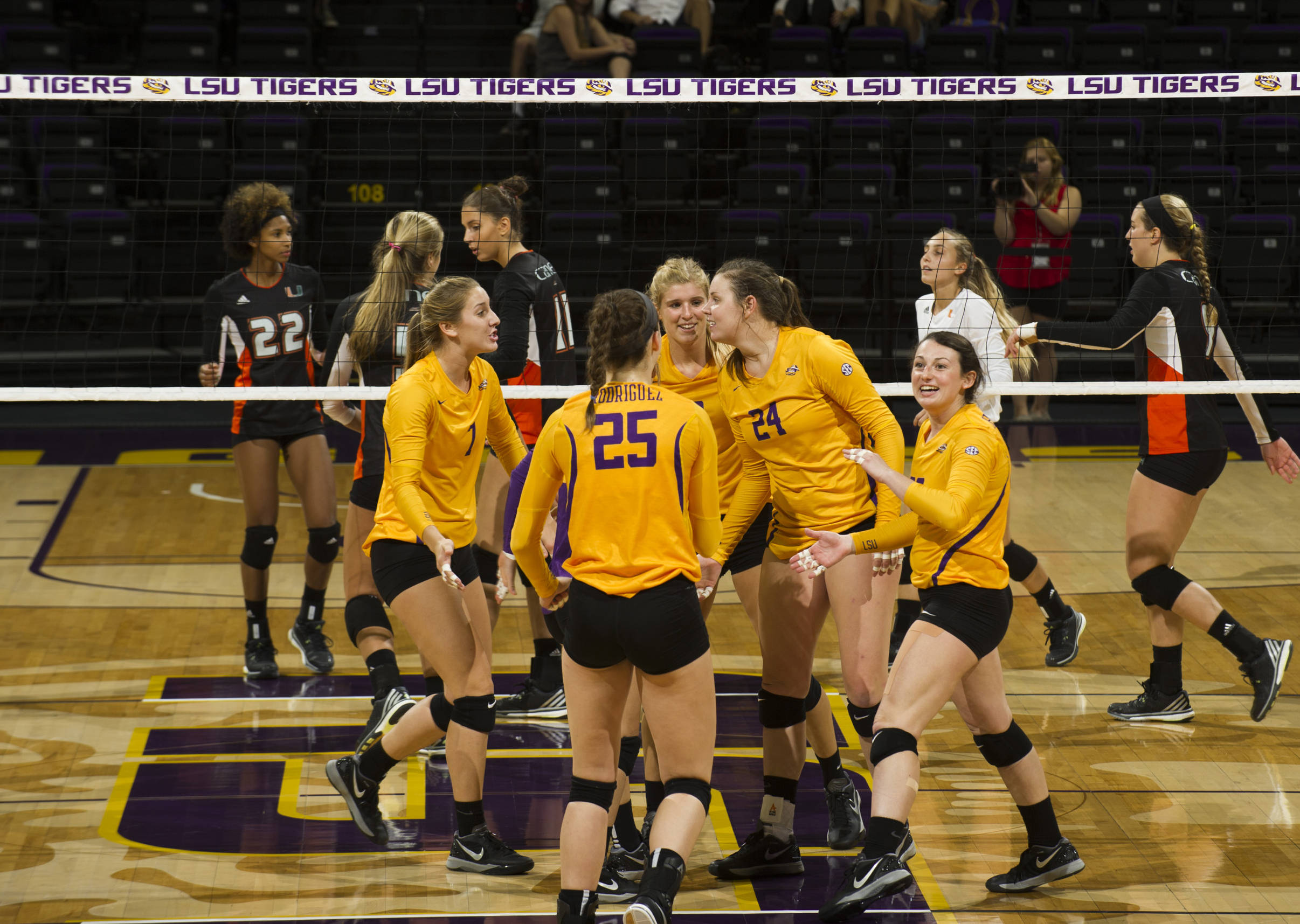 BATON ROUGE, La. – The LSU volleyball team put together one of its best offensive performances of the season on Sunday afternoon, but it wouldn’t be enough to overtake the visiting Miami Hurricanes in the finale of LSU’s tournament, falling 25-23, 20-25, 25-20, 25-23 inside the Pete Maravich Assembly Center.

The Tigers (1-7) hit .220 as a group, a season-high for the squad, earning two more kills than the Hurricanes (5-3) over the course of the afternoon – 57-55 – with three players finishing with double-digit kills for LSU. LSU earned double figure kills in each of the four sets, hitting .333 in the third which was their highest of the match.

“I thought we played hard, and we played well. I think it was the most balanced offense we’ve had,” head coach Fran Flory said. “I think we lost it in terms of we tried to win the match rather than just execute the play. We started playing to the scoreboard rather than just scoring points.”

Senior Cati Leak was one of four Tigers to earn a double-double against Miami, leading all players with 21 kills, hitting .327, while also collecting 10 digs for LSU on the day. Freshman Toni Rodriguez finished with 15 which were second for all players, earning four digs. Katie Lindelow had 12 kills and 10 digs, while also having two service aces and two blocks.

Cheyenne Wood served up a new career-best 39 assists on Sunday, finishing second on the team in digs with 11 as she was named to the all-tournament team with a service ace, three kills and a blocks.

“I think there was a lot of improvement from Friday night,” Wood said. “We were playing with more passion. We are getting better and better. It just wasn’t good enough today.”

Haley Smith finished with a match-high 21 digs, earning nine assists. The Tigers finished the day out-blocking the Hurricanes 9-8, led by freshman Olivia Beyer, who in her first start led the team with four (two solo, two assisted) while also having two service aces. Lindsay Flory and Tiara Gibson each finished with three.

Alexis Mourning and Taylor Scott each finished with 14 kills for Miami, with Scott adding 13 digs for the double-double. Haley Templeton had 47 assists, eight digs and three blocks, while Kalysta White had 18 digs to lead the Hurricanes. Mourning led all players with six blocks, all coming on the assisted end.

Regrouping from the Friday night match, the Tigers raced out of the gates like gangbusters, as a Leak kill gave LSU a four-point advantage up 7-3. By the time the two sides reached the media break, LSU was leading 15-13 and continuing to hold off the Hurricane attack.

The first set alone featured four ties, that coming deep into the set as Miami scored eight of the next 13 points to take a 21-20 lead over LSU and force the team into its second timeout of the frame. A short, two-point swing by Miami out of the timeout gave the visitors a three-point lead at 23-20, as the Tigers fought off two match points before falling 25-23.

Coming so close to taking the opener the team did not lose its confidence on the attack hitting .262 in the frame with 15 kills to just four errors against Miami in the second, while the Hurricanes hit only .171 and saw LSU go 14-20 on side out opportunities.

The frame was just as thrilling, this time featuring six ties and four lead changes, with the action picking up with the set tied at 17-17. Out of an LSU timeout, the Hurricanes got a point, but not before Gibson came back with a kill to knot it back up at 18. A kill from Rodriguez forced Miami into a timeout down two at 20-18, earning the first point out of the timeout to pull back within one.

However, it would be only one of two points Miami would earn the rest of the set as LSU closed it out in style scoring four of the next five to tie the match at 1-1 earning the 25-20 second-set victory.

Putting together its best set yet, with a .333 clip and 16 total kills, LSU got five kills each from Lindelow and Leak in the frame, while Wood had 11 assists, tying the most she had in the match up until that point. For the visitors, they only committed one error hitting .565 which proved to be their best of the day, balancing the attack.

LSU had the advantage storming out to a 9-5 lead over the Hurricanes forcing Miami into a timeout. The quick break worked as Miami scored the next four in a row to tie the set at 9-9 to force the Tigers into a timeout. A kill by Wood gave LSU the lead back at 10-9, but another long rally by Miami put the Hurricanes back on top, rattling off five consecutive points to go up 14-10. Miami captured seven of the next 12 points to force the Tigers into another timeout leading 21-15.

The Tigers rallied, staving off set point and getting to the 20-point mark, cutting the Miami lead to four before eventually falling on the next point 25-20.

Another early breakaway for the Tigers to open the fourth set saw the home side earn a 7-4 lead and the Hurricanes calling another timeout. Slowly, Miami began to chip away at the Tiger lead, eventually pulling within one at 14-13 as LSU called a timeout to stop the rally. A block by Gibson and Wood, followed by a Lindelow service ace put LSU up three at 16-13, but not before a 4-0 run by Miami gave the opposition a 17-16 lead and LSU calling another timeout.

The set would flip on its ear from that point, as the bulk of the 10 ties and five lead changes would be littered throughout the rest of the set. At 20-20, a kill for the Tigers gave LSU the lead back at 21-20, but a service error knotted it up again at 21-21. A kill and ace for Miami put pressure on LSU, weathering it by getting a kill from Lindelow and a Miami attack error to tie the set at 23-all.

Miami was unfazed, earning the final two points it needed in order to close the match and earn the 3-1 result.

“When a team is losing, winning becomes the goal. As a coach, you have to keep them focused on the process,” Flory said. “We worked really hard throughout practice this week to get that. We made a great step today, but we weren’t able to finish it, which is disappointing and hard for our seniors to be in that position to have a chance to win it at the end and not quite get through it.”

LSU will be back in action, closing the non-conference portion of the schedule at the 2015 Lobo Invitational hosted by New Mexico. The Tigers open play Friday at 6 p.m. CT against LIU-Brooklyn in Albuquerque.