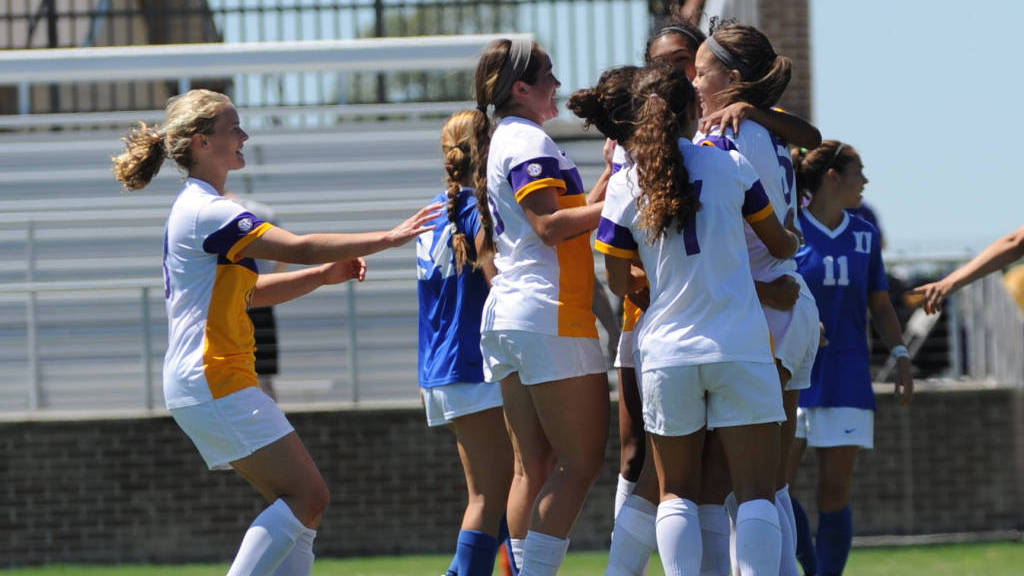 BATON ROUGE – After being tripped in the box by a Duke defender on a ball played over the top, sophomore striker Jorian Baucom stepped up to the penalty spot and buried what proved to be the winning spot kick to lift the Tigers to a dramatic 1-0 win over the 15th-ranked Blue Devils on Sunday afternoon at the LSU Soccer Stadium.

The Tigers (5-1-2) got back in the win column following Friday’s 3-2 extra time defeat in their SEC opener at Alabama as they leveled their all-time series with Duke (5-2-1) at 1-1-1 in their three matches.

“That’s Minnesota, Indiana and now Duke, so our Sunday performances have been outstanding. We’re really fit, strong and the results are showing that with how we’ve performed on Sundays, ” Lee said of his team’s effort. “Obviously, we feel great. We’re really happy for the kids. Friday night was a tough result, but at no point did we question their effort or toughness in it.

“To come back like this against a high-quality team like Duke that’s really well-coached is tremendous. It’s a big win for our team, and I’m happy for the team today. They’ve worked so hard for days like this.”

Baucom, having already missed a penalty kick early in the match in the 13th minute, was true on her second attempt as she fired past Duke goalkeeper EJ Proctor from 12 yards out to give the home side a 1-0 lead on 73 minutes with her NCAA-leading eighth goal of the 2015 season. She has now scored in six-straight matches dating back to a 4-1 win over Western Kentucky back on Aug. 28.

LSU’s star striker from Scottsdale, Arizona, struck the post with her first-half penalty kick after referee Christina Hutchinson blew her whistle and pointed to the spot at the 12:06 mark following a hand ball in the box by a Duke defender. But after being tripped up herself in the area near the top of the six-yard box, Baucom calmly buried the winner at the 73:00 mark to hand the Tigers a 1-0 win over the visiting Blue Devils.

The afternoon was not without its share of adversity as the Tigers were forced to cope without the services of senior team captain Alex Arlitt in central defense following her sending off at Alabama on Friday night.

They responded with a strong defensive effort on the afternoon as LSU’s reshuffled back line of senior Gracie Campbell, junior Megan Lee, sophomore Jordane Carvery and freshman Alex Thomas held the Blue Devils to their second-lowest shot count of the 2015 season with 13 total shots in 90 minutes. Duke managed just seven shots in a 1-0 victory over 15th-ranked USC just a week ago on Sept. 4.

Senior goalkeeper Catalina Rubiano saved all five shots on target she faced on the afternoon for her third clean sheet of the season. Perhaps none were as important as a diving save made from Malinda Allen’s header as the clock ticked under one minute to play in regulation when Allen headed a free kick down across the face of goal from the top of the six-yard box.

Rubiano was quick to react as she snatched Allen’s potential leveler with both hands diving low and to her left to preserve her clean sheet and keep the home side in the lead in the closing seconds.

“Those are all just reaction, they happen in the blink of an eye,” Rubiano said when talking to the media about her save late in the game. “We all wanted this win so bad, so I just put my body behind it and did anything I could to get it. I’m just so happy that I got it and we were able to hold on and win the game.”

The Blue Devils appeared to breach Rubiano’s goal with an equalizer in the 79th minute when the ball was played across the box to junior defender Christina Gibbons for a curling effort inside the right post, but a player was ruled to have been offside by the linesman earlier in the buildup. Duke’s celebration was short-lived as Hutchinson was alerted to the flag already being raised for offside.

Sunday’s win should give the Tigers much-needed momentum heading into their SEC home opener against the Georgia Bulldogs on Thursday night with kickoff set for 6 p.m. CT on the SEC Network. They will then  end their non-conference schedule next Sunday, Sept. 20, when they welcome Marquette to Baton Rouge for a match kicking at Noon CT on the SEC Network+.