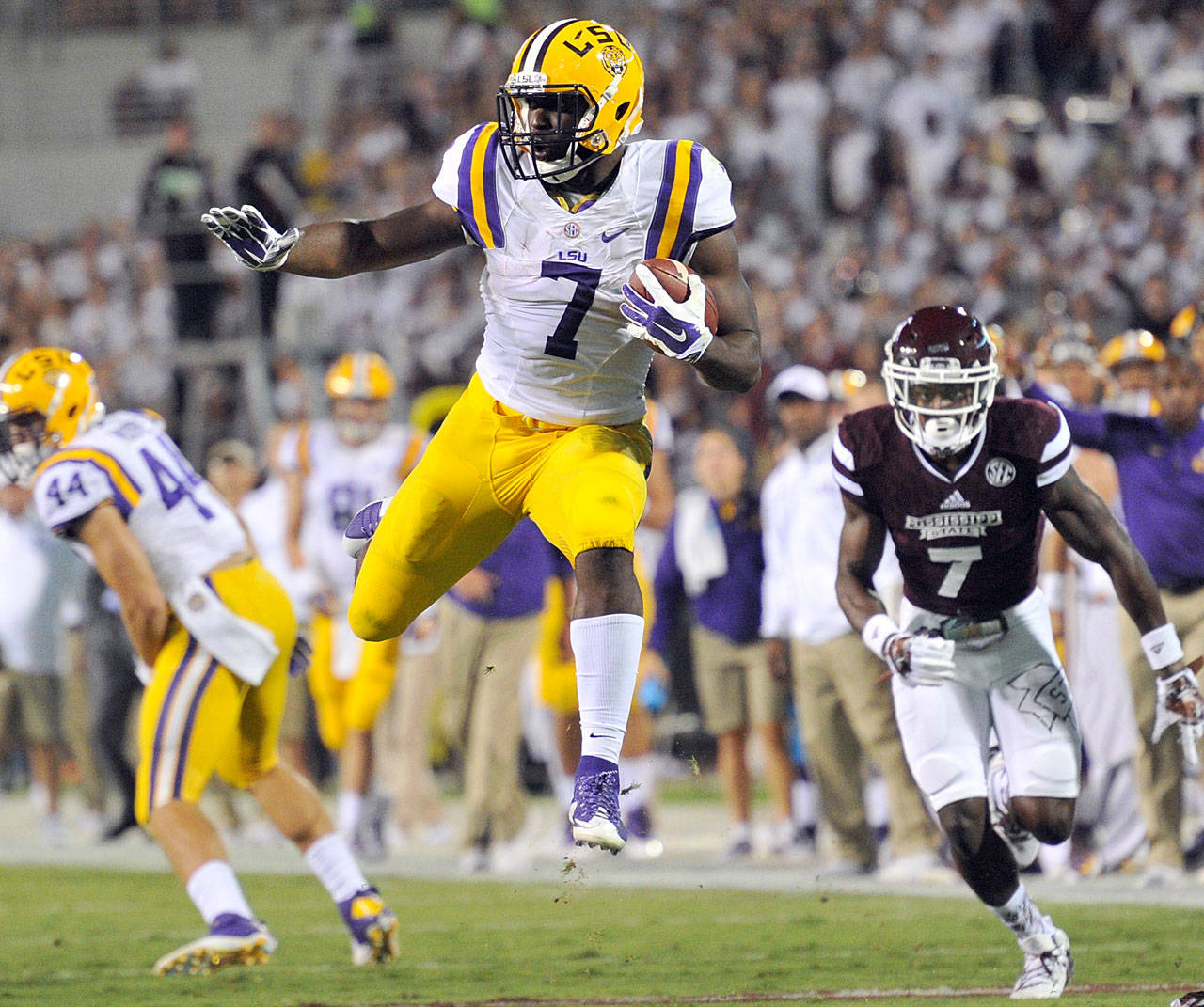 Robbed of its season opener by lightning a week prior, LSU (1-0) shook of its rust to earn a critical Southeastern Conference victory when Mississippi State’s Devon Bell missed a 52-yard field goal as time expired.

LSU increased its school-record streak of season-opening wins to 13 and beat Mississippi State for the 15th time in 16 meetings. Les Miles earned his 100th win while coaching a ranked LSU squad (100-28 since 2005).

The Tigers led 21-6 through three quarters before State quarterback Dak Prescott was able to get into an offensive rhythm. The senior cut the LSU advantage to eight with a 1-yard touchdown run on the second play of the fourth quarter and completed 14-of-18 fourth-quarter passes for 161 yards. His 5-yard touchdown pass to De’Runnya Wilson moved the Bulldogs with two points with 4:00 left, However, his two-point conversion pass was incomplete.

On the game’s final drive, LSU’s defense bent but didn’t give State a shot at a short field goal. Instead, Bell, the Bulldogs’ long-distance kicker, tried from 52 yards and missed to the right.

Meanwhile, Fournette did the heavy lifting for LSU. The sophomore carried a career-high 28 times and scored all of LSU’s touchdowns with runs of 1 yard (took a direct snap), 26 yards (leaped defenders) and 18 yards (sprinted untouched around right end).

Starting his second career game, quarterback Brandon Harris completed 9-of-14 passes for 71 yards. He aslo ran five times for 48 yards and was only sacked one time.

LSU defense bottled up Prescott and the Bulldogs for the better part of three quarters, allowing only a pair of field goals in the first 45 minutes of action.

Penalties plagued the Tigers as both sides of the ball, as the Tigers had two first-half touchdowns called back.

The second-largest crowd in Davis Wade Stadium history, 62,531, paid to see the game.

LSU won the coin toss and deferred its decision to the second half, while Mississippi State took the opening kickoff.

After a touchback, the Bulldogs picked up a first down on a short run by Shumpert before Prescott was stopped on a designed run by tackle Christian LaCouture and linebacker Kendell Beckwith on third-and-7.

With cowbell noise aplenty, LSU used three Fournette runs and came up a yard short of a first down. Jamie Keehn‘s bounding 58-yard run pinned the Bulldogs at its 9-yard line.

Once again, Beckwith and cornerback Tre’Davious White came up with a stuff of Prescott on a run for no gain. Mississippi State 33-yard punt landed out of bounds, giving the Tigers possession at the State 48.

Bulldogs defensive lineman Ryan Brown was penalized for holding Fournette on a third-down screen pass, giving the Tigers a new set of downs at the MSU 37. Though a 37-yard touchdown pass from Harris to Dural was called back due to holding on the Tigers, the sophomore quarterback connected with tight end DeSean Smith for 23 yards on third-and-11 to keep the drive alive at the 15.

Two Williams runs netted 14 yards to the 1, where Fournette lined up behind center in shotgun and leaped the pile for the first touchdown of LSU’s young season.

Trent Domingue tacked on the PAT and LSU led 7-0 with 4:37 remaining in the first quarter.

A false start and sacks of Prescott by freshman Arden Key and Godchaux forced a Bulldogs punt on fourth-and-25 from the 10.

After a 36 yard punt started LSU’s ensuing drive at the State 46, the Tigers needed only two plays to reach paydirt. A 20-yard pass from Harris to Malachi Dupre was followed by a 26-yard touchdown run by Fournette around the left end. With 48 seconds left in the opening quarter, LSU led 14-0 after scoring its most first-quarter points in a season opener on the road since at least 1916.

LSU’s defense continued its stellar play into the second quarter, as linebacker Deion Jones pressured Prescott into an errant throw on third-and-6 from the Bulldogs 46.

After a MSU punt went into the endzone, Harris ran for 16 yards to the 36. Consecutive runs of seven yards by Fournette gave the Tigers another first down to the 43. However, LSU was charged with an illegal block on a 14-yard run by Harris before having a close catch by Dupre ruled incomplete and upheld by video review.

Mississippi State managed to cross midfield for the first time with 10:42 remaining in the second quarter when LSU safety Jamal Adams was flagged for taunting. However, three-straight passes by Prescott fell incomplete and State punted.

LSU looked to have extended its lead to 21 when Dural took an end-around 89 yards to the endzone, but the play was called by by a holding penalty on wide receiver John Diarse. After picking up a first down with a 12-yard run by Williams, a 9-yard pass to Diarse came up a yard short on third down and LSU punted.

After two more punts, the Bulldogs overcame a holding penalty with a 17-yard pass to Shumpert out of the backfield to the LSU 32. Again three-straight passes by Prescott fell incomplete to end the threat and Westin Graves entered to kick a 43-yard field goal.

Mississippi State cut the LSU lead to 14-3 with 44 seconds left in the half.

LSU took the same lead into the halftime break, but couldn’t get any momentum on its first drive of the second half and punted.

State capitalized on the stop by driving 40 yards on nine plays to add a 24-yard Graves field goal that cut the advantage to 14-6 with 10:04 left in the third quarter. A 21-yard pass from Prescott to Wilson gave State first-and-goal at the LSU 9, but again the Tigers defense stiffened.

LSU responded with its best scoring drive of the night, spanning 75 yards in seven plays to extend its advantage to 21-6. Fournette started the drive with a 20-yard run to the LSU 45. After a 9-yard pass to Dural on third-and-5 from his 49, Harris scrambled 18 yards to the State 23. Two plays later, Fournette sprinted around the right end for his third touchdown of the game.

The teams traded punts before Prescott began the Bulldogs’ comeback late in the quarter. He converted a fourth-and-1 at the LSU 41 with a 2-yard run. A holding penalty on the Tigers was followed by completions of 18 and 10 yards, setting up Prescott’s 1-yard TD run.

A quick three-and-out by the Tigers gave the Bulldogs possession at its 36. With the help of a personal foul on LSU, Prescott worked his way to the LSU 32 when he was sacked by LSU defensive end Lewis Neal on third-and-6. The key play kept State out of field goal range and gave LSU an opportunity to run the clock for nearly five minutes before punting at the State 43.

Prescott wasted no time getting back into the endzone. He completed six-straight passes for 82 yards, capping the drive with a 5-yard touchdown pass to Wilson. Trailing 21-19, State went for two points, yet Prescott’s pass was wide of his target.

LSU again pressured Mississippi State behind Fournette, who rolled for runs of 6, 8 and 7 yards to start the drive. After reaching midfield, Fournette’s third-and-3 run came up short and the Tigers punted to the State 11 with 1:32 left to play.

With five completions, Prescott quickly advanced into LSU territory at its 29. However, a delay of game penalty on third-and-10 cost State five yards. Prescott’s pass with 3 seconds left was batted away by White, and Bell took the field for a long field goal.

Although Bell’s first strike was waived off when LSU called its final timeout, his attempt from 52 yards as time expired was wide to the right.