Volleyball Falls in Three to Purdue 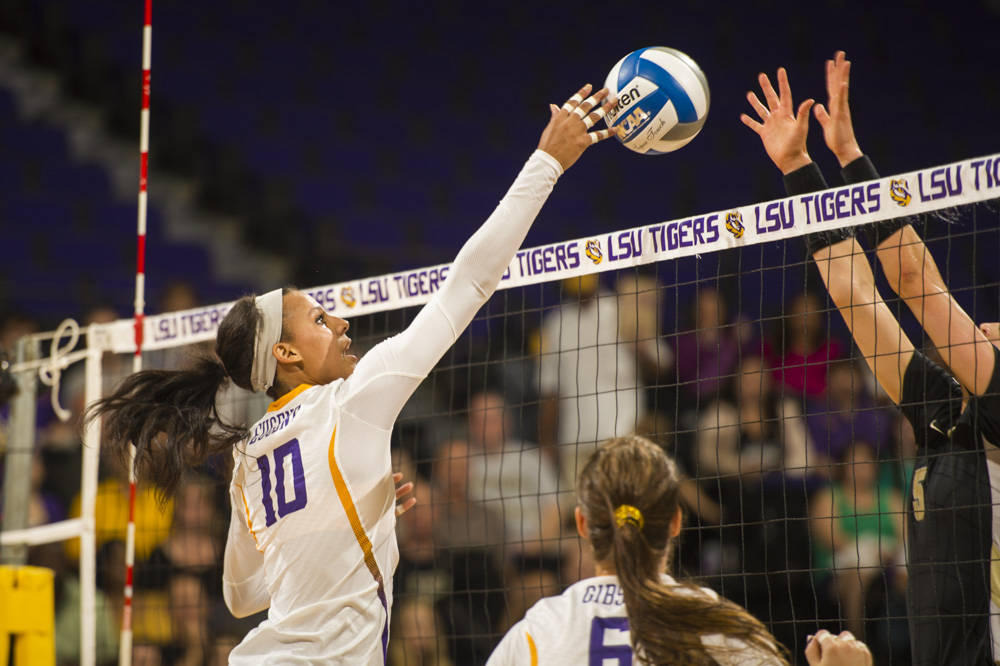 Looking to find its offense after earning just five kills in the first set, the Tigers (1-6) powered through and came on in the latter two earning 13 and 14 kills in the final two frames. The Boilermakers (6-1) were stout offensively, hitting .266 on the night as a group, committing just 15 attack errors and converting 59 percent of its sideout chances in the match.

“It was a lost opportunity, but you have to credit Purdue. They’re a very solid team,” head coach Fran Flory said. “They didn’t give us a ton. We created some great offense. Their blocking took our offense away, and instead of being resilient and tough, we backed off. When you do that, you’re not going to score a lot against a team like this.”

Cati Leak led all players earning 12 kills to go along with two digs and two solo blocks, followed by Mimi Eugene who had eight kills and nine digs with an assist.

“They showed up to play, and we definitely could be better about that,” Leak said. “We need to continue to just focus on our side and not get caught up in what they’re doing and what we are not. As long as we are controlling the tempo and doing our things, attacking and making smart shots, we are definitely going to maintain control and be more successful than tonight.”

Cheyenne Wood earned her second double-double of the season on Friday, leading the setters with 14 assists, while earning 10 digs to also lead the team on the night. Haley Smith, Katie Lindelow and Eugene each finished with nine, with Lindelow providing two blocks.

Annie Drews led the Boilermakers with 11 kills, while Ashley Evans had 33 assists and Amanda Neill had 12 digs. Danielle Cuttino finished with seven blocks as Purdue earned a total of 10.0 to LSU’s 4.0.

Purdue was hot out of the gate, hitting .281 in the opening set, while LSU finished with only five kills while committing 10 errors. Leak had two of the five for the Tigers in the opener, as Purdue went on a 7-0 run to jut out to a 13-5 lead. After having already called a timeout, LSU would need to call another as the Boilermakers earned five of the next eight to go up 18-8. Purdue would take the set holding LSU to just two more points at 25-10.

The Tigers came out with a much different mentality and fight in the second, as trailing by five at 7-2, a seven-point swing by LSU gave the home side a 9-7 advantage forcing Purdue into its first timeout of the match. Although the squad was able to take that momentum, the pendulum swung the other way rather quickly as Purdue came back to tie the set at 9-9 and 10-10 in the start of a three-point swing that gave the Boilermakers the lead at 12-10.

An attack error and a Eugene kill knotted the set at 12, but another run for Purdue – this time 7-1 – gave the Boilermakers a 21-14 lead and forcing LSU into another timeout. However, LSU cut that deficit to just four after scoring four of the next five to make it 22-19 forcing the opposition into their second timeout.

Unfortunately, the Tigers were unable to mount enough of a comeback to overtake Purdue, falling in a 2-0 hole after dropping the second 25-21.

The final set was even closer, featuring five ties and four lead changes, but most of those came within the first 14 points of the set. Leading 7-6 after a block from Tiara Gibson and Gina Tillis, Purdue went on an 8-0 run to go up 14-7. From there, the Boilermakers had control and were able to hold off the Tigers from that point on, earning the sweep by taking the third 25-17.

“We definitely need to learn to stay calm and play on our side and not worry about who’s on the other side,” Eugene said. “We definitely have places to improve. That’s what we are focusing on right now, and we are going to come back playing better in the next match that we have.”

LSU returns to action on Sunday afternoon, hosting the Miami Hurricanes at 1 p.m. in the Maravich Center. The match will be streamed live on SEC Network+ and will be available through WatchESPN.