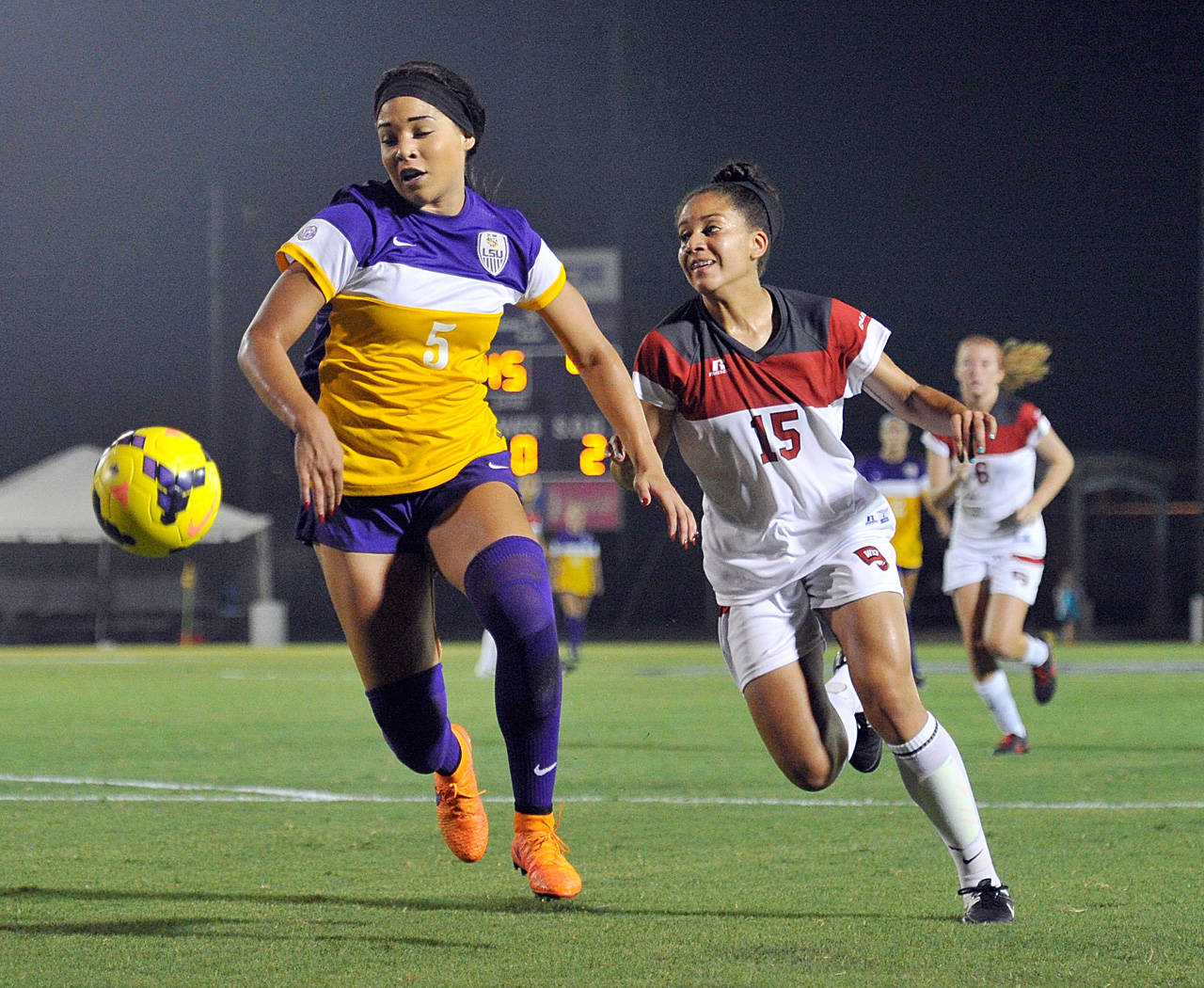 TUSCALOOSA, Ala. – The Tigers twice took the lead through junior striker Summer Clarke in the 21st minute and sophomore forward Jorian Baucom in the 77th minute, but the hosts pulled it back both times and found the winner just two minutes into the second extra time period as LSU fell to Alabama, 3-2, in their SEC opener on Friday night.

With the match delayed 90 minutes due to thunderstorms rolling through Tuscaloosa at kickoff, the Tigers (4-1-2, 0-1 SEC) and Crimson Tide (2-3-2, 1-0) went toe-to-toe for 102 minutes before Celia Jimenez buried the header from Emma Welch’s corner kick at the 101:41 mark of the second extra time period.

The Tigers went down to defeat for the first time in the 2015 season while also seeing their four-game winning streak snapped in matches played against the Crimson Tide at the Alabama Soccer Stadium.

It was Clarke who opened the scoring on the night midway through the first half when she took possession near the center circle with her back to goal, turned her defender and sprinted into space beyond the right of the box. That’s where she took aim and unleashed a right-footed strike from 25 yards that found the back of the net inside the left post to give the visitors a 1-0 lead in the 21st minute of play.

Clarke found the scoresheet for the second match running as she followed a two-goal, one-assist performance in LSU’s 4-0 win over Indiana last Sunday with the opener for her fourth goal of the season on Friday.

Despite Alabama playing on the front foot coming out of the break, the Tigers withstood the pressure early in the second half while maintaining their advantage as the clock ticked below 20 minutes to go in regulation. But Chatham DeProspo popped up with the equalizer on 72 minutes with the first of two corner kick goals for the hosts as she finished a loose ball in the box at the 71:58 mark to draw the Tide level at 1-1.

The 74th minute produced one of the flashpoints of the match when play was stopped following a tie-up near the right corner flag in the Tide’s attacking third and Alabama’s Lacey Clarida was issued a yellow card while LSU’s Alex Arlitt saw red, forcing the Tigers to play with 10 players in the final stages of the contest.

Despite the momentum and numerical advantage on the field residing with the Tide, the Tigers struck quickly with the go-ahead goal in the 77th minute when Baucom was played in behind the Alabama defense by Lexi Gibbs from midfield and finished to the right of Tide goalkeeper Emily Rusk to restore LSU’s lead to 2-1 at the 76:09 mark. Baucom showed her strength as she held off her defender to win possession and finished from 10 yards for her team-leading seventh goal of the season.

The NCAA’s fifth-leading goal scorer of the season coming into the match, Baucom found the back of the net for the fifth-straight match and the seventh time in seven appearances in her sophomore season.

LSU’s lead was short-lived with reserve midfielder Alexis Mouton equalizing once again for the Crimson Tide just four minutes after Baucom’s go-ahead goal as she ran onto a loose ball outside the penalty area and put home a low-lining strike from distance that found its way through a sea of bodies in the box and inside the right post in the 81st minute.

Alabama then emerged with the win and the three points from Friday’s SEC opener when Jimenez flicked home a near-post header from Welch’s corner kick in the 102nd minute for the Golden Goal in extra time.

After opening up the SEC season at Alabama on Friday night, the Tigers will return home to Baton Rouge to continue their non-conference slate with an SEC-ACC clash with the No. 15-ranked Duke Blue Devils in a game that is set to kick off at Noon CT at the LSU Soccer Stadium. They follow with a match against Georgia in their SEC home opener on Thursday, Sept. 17, at 6 p.m. CT on the SEC Network.