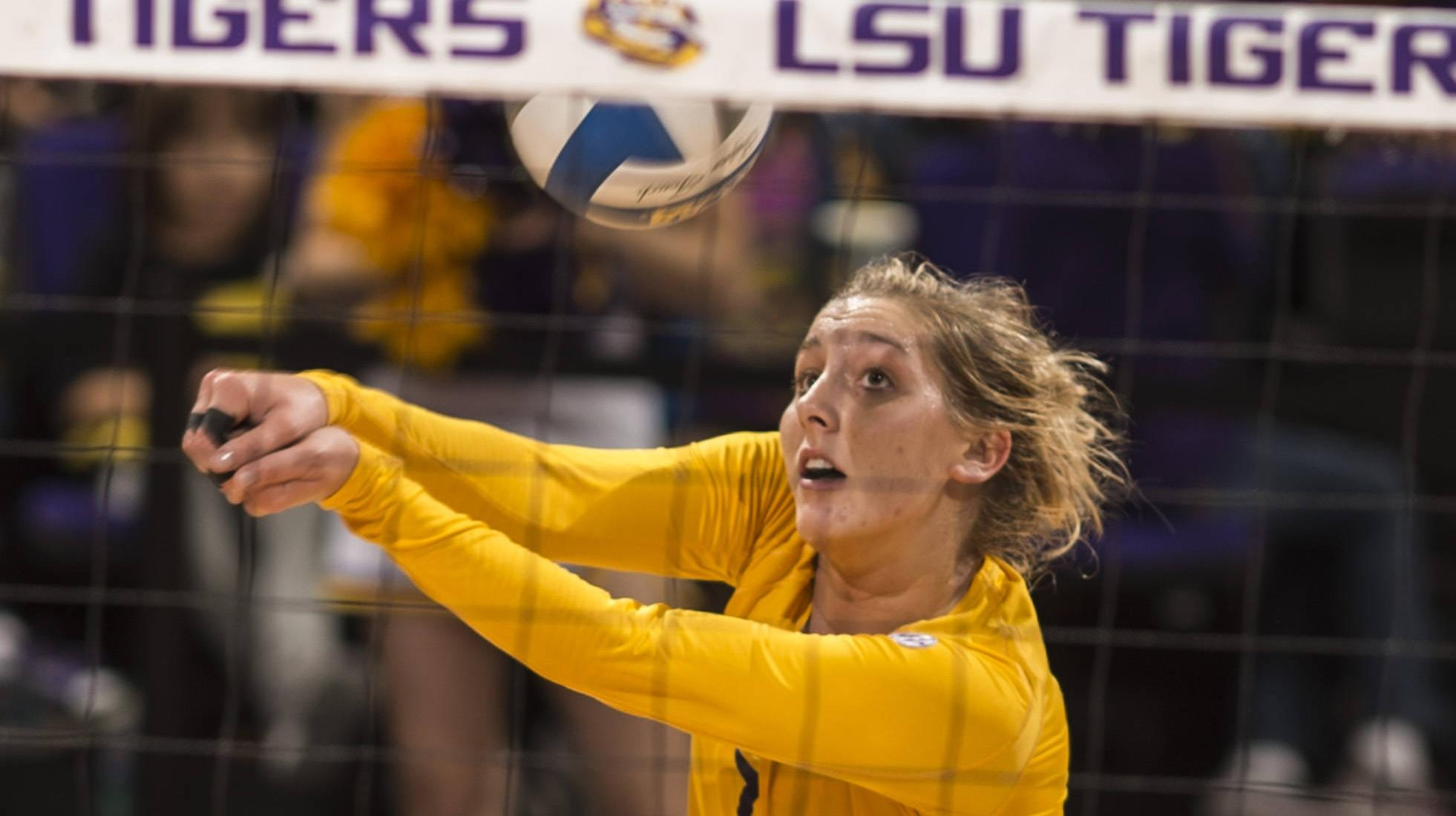 Understand this about LSU volleyball player Katie Lindelow, who sets the standard for the term student-athlete.

She’s a really good college player, but at 5-foot-11 she’s not the tallest, not the quickest, and by no means the best jumper.

Yet here she is again. Through six matches, the outside hitter is second on the team in kills and third in digs.

Which isn’t bad for a fourth-year senior in her first semester of graduate school.

“When we recruited Katie long ago everyone told us she was the whole package,” LSU coach Fran Flory said.

Indeed. Lindelow graduated from LSU in three years with a degree in sports administration. Friday night she’ll be taking a break from her graduate studies in sports management as the Tigers open their home schedule with a 7 p.m. matchup with Purdue. They play Miami (FL) at 1 p.m. Sunday.

LSU, 1-5, struggled in two season-opening road tournaments. What’s more, the Tigers are finding their way without middle Khourtni Fears, who lost all of last season to a knee injury and then was lost for this year just three days before the first match.

“I think we’re ready to be here and show the effort we’ve put in to get better,” Lindelow said. “We’re ready to play on our home court. We have lots of local kids on the team this year, so we’re going to have a good crowd.

“This week of practice has been different. We’re turning the corner and ready to make a change and start winning some games.”

The Tigers started 0-5, but in that fifth loss, to Michigan, Lindelow had one of the best matches of her career with 19 kills and 13 digs.

“She’s the driving force and a big motivator for our team,” said her teammate and fellow senior, libero Haley Smith.

“My confidence has finally come along,” said Lindelow, president of LSU’s Student-Athlete Advisory Committee. “I always kind of thought I’d just be a back-row player but I can finally see myself hanging with the big girls in the front row,” she said. “And I’ve started to take ownership of that and been trying to push myself to play at higher level, physically and higher than last year.”

She was the best player in the state entering her senior year at Mandeville High School, but missed all of that season plus the spring club campaign when she blew out her knee.

“I got to see more of the coaching side. I really got to kind of enjoy my senior year and spend some time with family and friends that I wouldn’t have gotten to do,” she said.

That includes her sister Rachel, six years older, who won a state title at Mandeville, had a stellar career at Tulane, coached at Dominican and is now coach at New Orleans-area Riverdale High School. Occasionally, the sisters play in beach tournaments together, but back then Rachel was a great resource for Katie.

“Rachel has probably been the most influential person, especially as I finished up high school and got into college,” Katie said, noting that “how successful she was inspired me. She always handled herself with such poise and in such a respectable way.

“And I wanted to do the same thing.”

That included hard work, which Lindelow maximized her senior year.

“I was rehabbing and focusing on getting stronger, so I got to work out a lot more than if I’d been playing. So I got to do extra lifting and I came in (to LSU) more prepared than what I would have been.”
Nonetheless, there were plenty of observers who figured her to be a back-row player in college who might occasionally see some rotations on the front row.

“Well, I think she was under-recruited,” Flory said. “When you’re watching athleticism, there are many people who are bigger and more physical, but not many who have better competitive drive and heart than Katie Lindelow.

“She gets the most out of her abilities because of internal drive.

But where she’s really great is off the court. In high school, her senior year she got a B in calculus. At LSU, she’s maintained a 3.5 grade-point average, she said.

“My parents definitely instilled that in me, but I took upon myself to do well all the time,” she said.
Through testing, she started LSU almost one semester ahead. Lindelow averaged 15 credits a semester and went to summer school.

“I took classes at the right time, I think. I took some hard classes with some of the easier ones in the same semester, so I didn’t have any six-month period where I was so overwhelmed at one time.”

As she entered her junior year, she and her advisor realized she could graduate in three years. The beauty of it is, is that Lindelow also plays for LSU’s beach volleyball team with two semesters of spring eligibly remaining, so can finish graduate school in 2017.

“(Graduate) classes are more interesting to me now because I know this is what I want to do,” Lindelow said. “The people in the class are on the same page and my classmates take it more seriously that being an undergrad and I like that about it. You’re more willing to speak up in class when you know everyone else is trying to come with things to say, too. There’s a lot of reading, which is different, but it’s good so far.”

Of course, it’s early, just like LSU’s volleyball season. For Lindelow and fellow seniors Cati Leak, an outside hitter who leads the team in kills and is second in digs, Smith and middle Emily Ehrle, the time is now.

“We didn’t start out great last year,” said Lindelow, whose Tigers made it to the NCAA Tournament and beat Oklahoma in the first round.

“This isn’t a new thing to us. We’d like for it to be different, we’d like to not have this start, but a slow start doesn’t mean you can’t have a strong finish. I think that’s the mindset we’re all taking on right now. The last two weekends, yeah, they matter, but they’re not going to define us.”