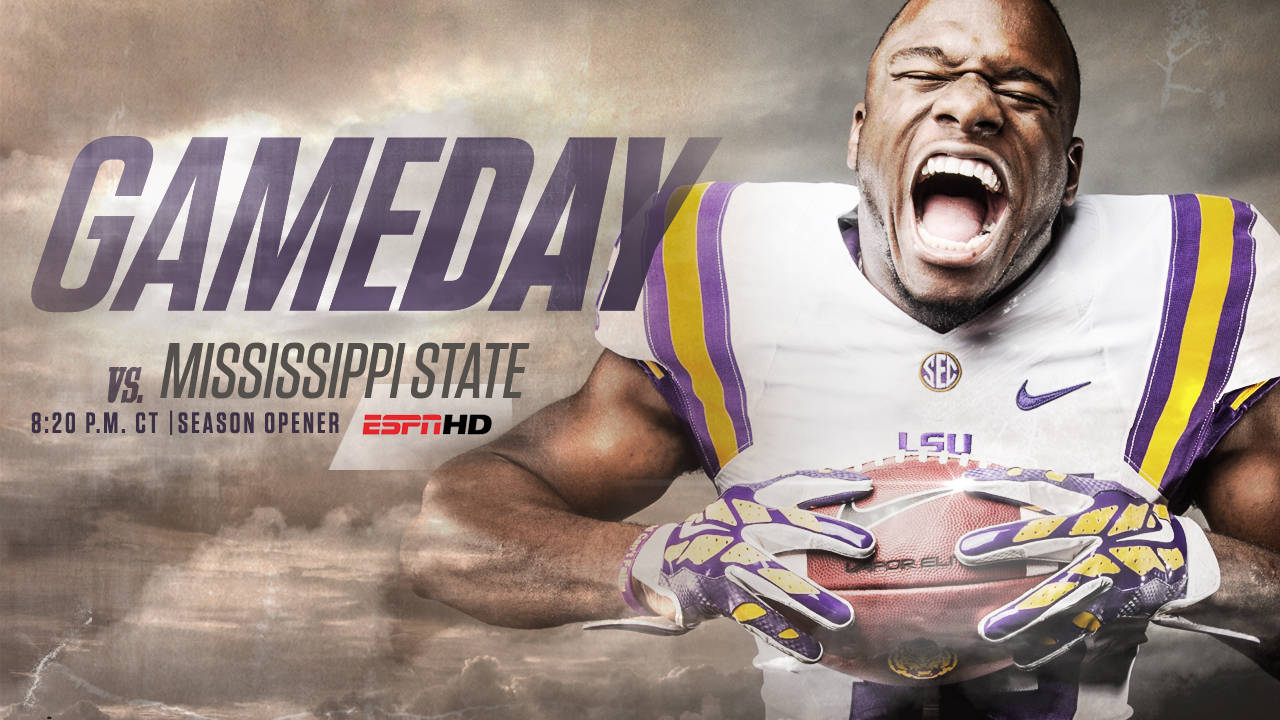 BATON ROUGE – An unscripted delay to the start of LSU’s 2015 football season will come to an end on Saturday when the 14th-ranked Tigers travel to Starkville to face 25th-ranked Mississippi State in what will be the home opener for the Bulldogs.

Last week’s scheduled LSU season opener against McNeese was canceled after just five minutes of action when persistent lightning in the area of Tiger Stadium never subsided. The game was finally called after nearly a four-hour delay after 10:30 p.m. The game will not be rescheduled.

As a result, LSU goes into this week’s contest playing the school’s latest first game of the year since 1998 when the Tigers beat Arkansas State, 42-6, on Sept. 12 in Tiger Stadium. Mississippi State is coming off a 34-16 win over Southern Miss last week in Hattiesburg.

Kickoff for Saturday’s game is set for 8:20 p.m. CT and can be seen on ESPN or the WatchESPN app. Dave Pasch (play-by-play), Brian Griese (analyst) and Tom Luginbill (reporter) will be on the call for ESPN.

The game will also be broadcast on the LSU Sports Radio Network with Hall of Famer Jim Hawthorne calling the action in what is his 33rd and final season as the Voice of the Tigers. Hawthorne is joined in the booth by former LSU great Doug Moreau along with former LSU letter winner and special teams sensation Gordy Rush reporting from the sidelines.

“We’ve had a really good week of preparation and excited to finally get the chance to play a football game,” LSU coach Les Miles said. “The challenge for our team this week was to improve without a game. There’s certain advantages that we have that are inherent to the position that we currently have, but one of which is that we didn’t play that first game.”

“These guys have earned the right to play,” Miles said. “I expect that we can play as many as 15 true freshmen this year. We sign players with the intent on them coming here and playing early and often. That was the case last week. I expect that we’ll see more of that this week.”

The Tigers go to Starkville with sophomore quarterback Brandon Harris starting for only the second time of his career. Harris, who joins Melvin Hill in 1994, as the last LSU quarterback to have his first two career starts come on the road against a SEC opponent. That year, Hill started at Florida and Ole Miss.

Harris got his first career start a year ago at Auburn after directing a furious fourth quarter rally for the Tigers in a 34-29 loss to Mississippi State. Harris beat out returning starter Anthony Jennings for the starting role this year.

“I was miserable for Brandon last week,” Miles said of his quarterback after last week’s cancellation. “He was so ready to play and lead his team in Tiger Stadium. He was one of the guys who never took off his pads during the delay. He really wanted to play; you could see the disappointment in his face.

“He had a good week of preparation and is excited about the opportunity this week. He just needs to relax and realize that he’s playing with a very talented team. I’m excited to see him play and watch what he can do. He’s made improvement with each practice during the preseason. I would expect his improvement to continue right on through the season.”

Harris will be matched across the line of scrimmage by a Mississippi State defense that allowed on 102 yards rushing last week to Southern Miss. The Bulldogs intercepted two passes and limited Southern Miss to just 4-of-17 on third-down conversions under first-year defensive coordinator Manny Diaz.

In the State win at Southern Miss last Saturday, quarterback Dak Prescott had 309 yards of total offense and accounted for three touchdowns while Brandon Holloway returned a kickoff for 100 yards for a score. Prescott is 15-6 as a starting quarterback for his career and the senior has scored 35 touchdowns and been responsible for 75 scores.

LSU will be trying to stop a State offense that has produced at least 420 yards of total offense in 15 straight games dating back to 2013.

In Monday’s press conference, Coach Miles was asked about how Kevin Steele would game plan against a mobile quarterback like Prescott.

“Both (Steele) and Ed Orgeron have a very quality view of a mobile quarterback and kind of how to operate,” Coach Miles said. “I think, first and foremost, putting speed on the field is the most important piece, and we do that.”

LSU brings back six starters in 2015 from the No. 1 ranked total defense in the SEC in 2014. LSU gave us 316.8 yards per game to rank No. 1in the league and No. 9 nationally. Additionally, LSU led the conference and ranked No. 3 nationally in passing yards allowed at 164.2 per game. Defensive tackles Christian LaCouture and Davon Godchaux, linebackers Kendell Beckwith and Lamar Louis, and defensive backs Jalen Mills and Tre’Davious White return as starters off the 2014 squad.

The Tigers return to Tiger Stadium for what will now be its home opener on Saturday, Sept. 19 at 2:30 p.m. against the Auburn Tigers.