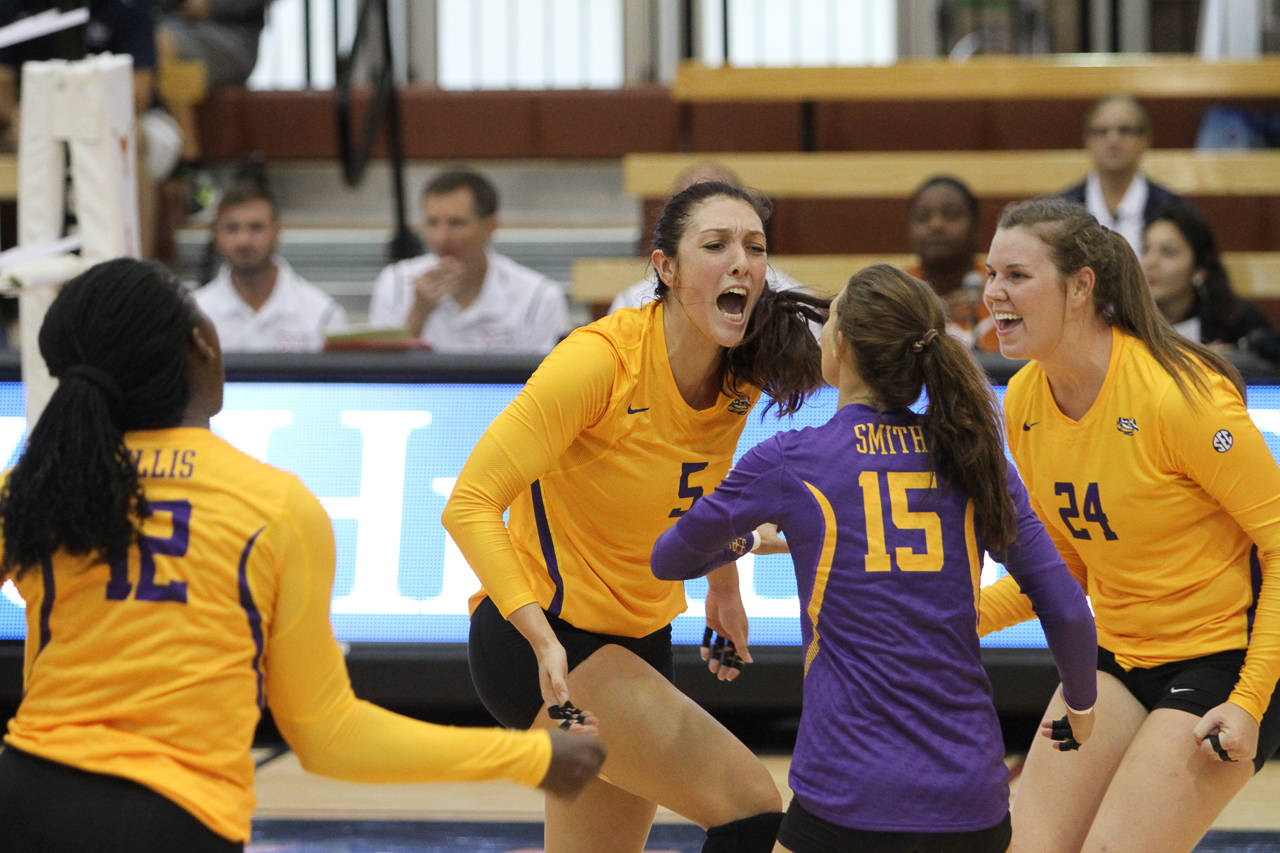 BATON ROUGE, La. – The LSU volleyball team opens the home portion of the 2015 schedule on Friday night in the first of two matches for the team this weekend that will see the Tigers play No. 20 Purdue at 7 p.m. and Miami (Fla.) on Sunday at 1 p.m. inside the Pete Maravich Assembly Center.

Every match in the 2015 season for LSU is free to the general public, compliments of The Advocate’s “Geaux Free” promotion. Fans will be able to pick up the 2015 team poster, schedule card and magnets at both of the matches this weekend, as Friday is student point night and the team welcomes back members from their camps on Sunday.

Both matches will be streamed live online on SEC Network+ and available through WatchESPN with Lyn Rollins and Yvette Girouard calling all of the action. Links to live stats for the matches will be available at LSUsports.net.

After spending the first two weeks of the season on the road, with the final non-conference trip looming next week, the Tigers look to open their stretch of home matches this weekend on a solid note against the 20th ranked Boilermakers and Hurricanes.

“We’re ready to be here and show the effort we’ve really put into getting better this week,” senior Katie Lindelow said. “Playing on our home court in front of our fans; we have a lot of local players on the team this year and we know we’ll have a good crowd come out.”

The Tigers are coming off of a week where they earned their first win of the season against the Xavier Musketeers to close the Ohio Bobcat Invitational last weekend, after dropping contests to both Ohio and No. 24 Michigan in that same tournament. LSU fell in three to the Bobcats and four to the Wolverines, dropping the first set to Xavier before sweeping the next three to earn the victory.

Coming into the week, LSU leads the Southeastern Conference in digs per set, averaging 17.74 which is also 11th in the nation. In the final two matches, the Tigers earned over 80 digs in both to help their cases against Michigan and Xavier, finishing the weekend averaging over 20 per set. In that win against the Musketeers, LSU held the opposition to a sub-.100 hitting clip – the lowest for an opponent so far this season.

Leading the way for the team was senior hitter Cati Leak, who was named to the Bobcat Invitational All-Tournament Team after posting two double-doubles, including having a 19 kill, 20 dig match against Michigan earning her highest output of the season in both categories. Leak is now 77 kills away from becoming the 20th player in team history to surpass 1,000 kills in a career and 116 away from becoming the 16th player with 1,000 digs.

Matching that team individual season high in kills along with Leak in that same match was Lindelow, who also netted a career high for herself as well. The Mandeville native averaged three kills per set during the tournament and is second on the team in kills per set at 2.80.

Although it was her fifth match played of the season, in her first start freshman Toni Rodriguez had a strong performance on the road with her 18-kill, four-dig match against the Musketeers to aid in the team’s win. After missing all of last season, Rodriguez was third on the team in total kills with 23 last weekend alone.

Junior Tiara Gibson leads the team in blocks with 12, followed closely by freshman Brittany Welsh‘s 11. Senior Emily Ehrle has the most solo blocks with three, earning two of them last weekend.

Earning her first collegiate double-double last weekend was Cheyenne Wood, the sophomore picking up 26 assists and 12 digs against the Wolverines, as she leads the team averaging 5.09 assists per set. Lindsay Flory served up a new season best 20 assists in that same match, tallying three kills as well in that same contest.

Haley Smith is now ninth on the career all-time digs chart after corralling 58 over the weekend for an average of 5.27. Smith is second in the SEC averaging 4.65 per set so far this year, having three matches with 20-plus digs during the year.

Purdue comes into the weekend with a 5-1 record after leaping into the AVCA Top 25 two weeks ago. LSU was in the Boilermakers’ tournament last season in West Lafayette, falling in three sets in the finale of that event. Miami is 3-3 after two weeks, as this is the first meeting between the two teams since playing two matches in Coral Gables back in 2013 that the two sides split.