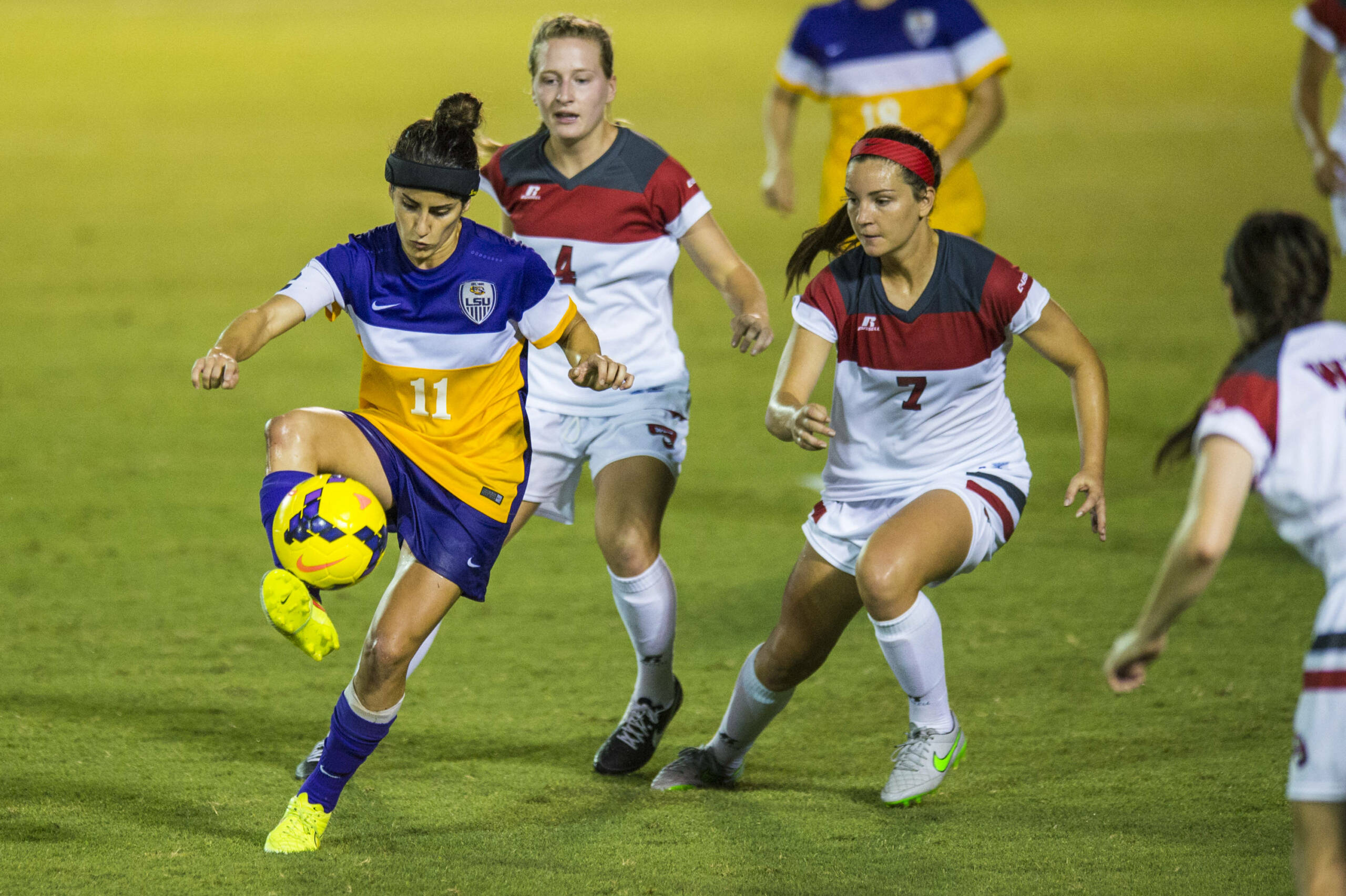 BATON ROUGE – The LSU Soccer team is off to its fourth-best start to a season in program history and will put its unbeaten record on the line Friday night with a trip to Tuscaloosa, Alabama, where it opens up SEC play against the Alabama Crimson Tide in a match that is set to kick off at 7 p.m. CT at the Alabama Soccer Stadium on the SEC Network+.

Friday’s SEC opener is one of 11 times fans can watch the Tigers in action during the 2015 season as they can follow the action live by logging on to ESPN3.com or by using the WatchESPN app.

Fans who are unable to watch Friday’s match can also follow all the action on social media as they can receive live updates of the match between the Tigers (4-0-2) and Crimson Tide (1-3-2) by following @LSUSoccer on Twitter at http://twitter.com/lsusoccer and Instagram at http://instagram.com/lsusoccer and by liking the LSU Soccer page on Facebook at http://facebook.com/lsusoccer.

The Tigers are coming off their most impressive win of the young season as they wrapped up a five-game homestand this Sunday with a 4-0 win over Indiana with junior striker Summer Clarke and sophomore forward Jorian Baucom each scoring two goals in a dominant performance. LSU is set to go on the road for the first time since a 2-1 season-opening win at Oregon on Aug. 21.

The Tigers have remained unbeaten through three weeks of the non-conference season and are without a loss in their first six games to start a season for the first time in seven years since 2008 when they set a school record with seven-straight wins to open a campaign. They were also unbeaten in eight matches to start the 2007 season with a program best 6-0-2 mark before their first defeat.

Their six-match unbeaten run to start the 2015 season is now the fourth-best start to a season in 21 years of the program’s history as they were also 5-0-1 in six matches to open up the 2004 campaign.

“We’ve come so far together as a team in just three weeks this season, and we hope to continue that progression tomorrow night when we open up SEC play at Alabama,” said LSU head coach Brian Lee. “It’s just like a new season for all of us each year when we go into conference play, so we know we’ll be facing a fired up Alabama team with a great crowd behind them that you expect whenever LSU is in town.”

The Tigers have enjoyed great success against Alabama with Lee leading the program as they own an impressive 6-2-2 mark in 10 matches during the regular season since his debut season in charge in 2005. It’s a record that features a current four-game winning streak in Tuscaloosa dating back to 2007 as the Tigers are 4-1 at the Alabama Soccer Stadium during Lee’s tenure.

They look to return to winning ways against their SEC rival after Alabama picked up a 3-2 win in extra time in the last meeting between the two sides in Baton Rouge on Oct. 9 of last season. Prior to that defeat, LSU had an eight-game unbeaten run against the Crimson Tide while posting a 6-0-2 record in eight matches played from 2006-13.

LSU’s last trip to Tuscaloosa saw Clarke score both goals in a 2-1 extra time win as a freshman in 2013 with goals in both the 49th and 102nd minutes in a campaign in which she earned Second-Team All-SEC honors.

Clarke is coming off a weekend at the “Stomp in the Swamp” in which she was honored as the Offensive Most Valuable Player while scoring two goals and dishing out an assist for a season-high five points for LSU’s win over Indiana. She is now the team’s second-leading scorer on the campaign with three goals and eight points to her credit in the opening six matches of 2015.

Topping the team’s scoring charts through the first three weeks of the season is Baucom, who proved to be the leading goal scorer at the “Stomp in the Swamp” last weekend with three goals in two games to take her season total to an SEC-leading six goals in six matches. Baucom is also among the Top 5 goal scorers nationally early in the season as he six goals ties her for the No. 5 position on the NCAA’s scoring charts.

Also among the NCAA’s leading scorers this season is senior midfielder Natalia Gomez-Junco as she served up three assists last weekend en route to a selection on the “Stomp in the Swamp” All-Tournament Team. It’s a senior season in which Gomez-Junco currently leads the SEC and ranks in a tie for the No. 2 spot in the NCAA through the first three weeks with six assists to her credit.

After opening up SEC play at Alabama on Friday night, the Tigers will return home Sunday afternoon as they continue their non-conference slate against the No. 15-ranked Duke Blue Devils with kickoff set for Noon CT at the LSU Soccer Stadium. They will then host the Georgia Bulldogs in their SEC home opener on Thursday, Sept. 17, with kickoff set for 6 p.m. CT in their SEC Network debut during the 2015 season.