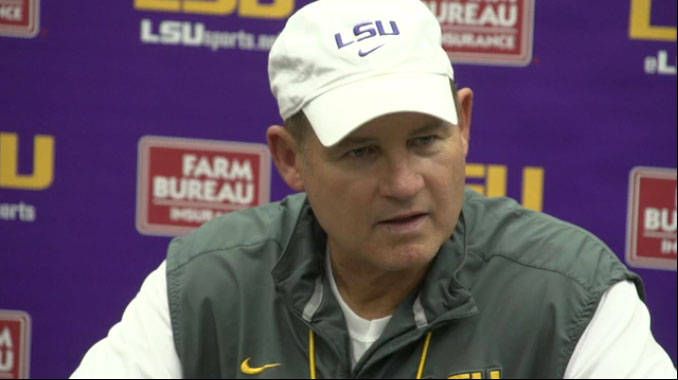 BATON ROUGE – LSU will get a second chance at opening its season on Saturday night in Starkville and the Tigers will do so with another good week of preparation under their belt, head coach Les Miles told members of the media following Wednesday’s workout.

The Tigers spent the majority of Wednesday’s practice indoors at the Charles McClendon Practice Facility as LSU continues to prepare for what will now be the school’s latest season-opening game since beating Arkansas State on Sept. 12, 1998.

LSU will practice again on Thursday followed by a walk-through on Friday morning. The Tigers will depart for Starkville on Friday afternoon. Kickoff between the 15th-ranked Tigers and Bulldogs is scheduled for 8:20 p.m. on ESPN.

“We had a very nice practice this afternoon,” Miles said. “I like the constant improvement that we have made. We have a team with a great attitude and guys who are busting their tails to accomplish what we expect from ourselves.”

LSU had its original season-opener against McNeese State cancelled after lightning in the area of Tiger Stadium delayed the game after just five minutes of action. The Tigers and Cowboys waited until after 10 p.m. before the game was finally called as lightning and thunderstorms never cleared out of the area.

Mississippi State goes into the LSU game with a 1-0 overall mark after opening the season with a 34-16 win over Southern Miss in Hattiesburg. Saturday’s game will be the home opener for the Bulldogs and they bring an 8-game winning streak in Davis-Wade Stadium into the LSU game.

Saturday’s game against McNeese State was scheduled be the second career start for sophomore quarterback Brandon Harris. Now, Harris will become the first LSU quarterback to have his first two career starts come on the road against Southeastern Conference teams since Melvin Hill in 1995.

That year, Hill started in road losses to Florida and Ole Miss. Harris got his first start as a Tigers year ago at Auburn after helping rally the Tigers in the fourth quarter of the 34-29 loss to Mississippi State in Baton Rouge.

“He wants to play,” Miles said of Harris. “He’s a ball player and cares about his team. He’s fighting like heck and that’s what he should be doing. I would expect him to continue to improve. However he plays against Mississippi State, if he throws 30 completions out of 30 attempts or if he has other statistics, he will improve from there.”