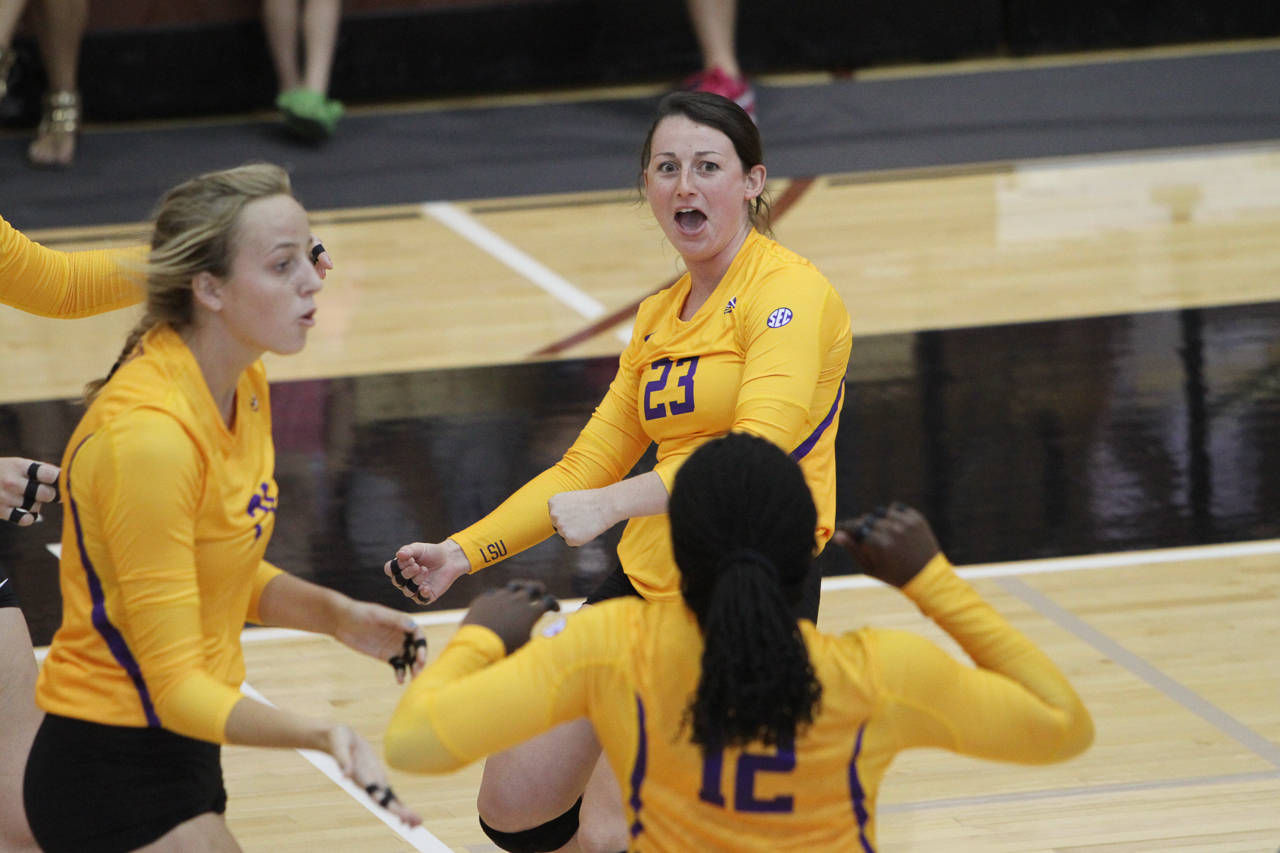 Nominee for SEC Player of the Week

Cati Leak, RS/OH, 6-2, Sr., Guntersville, Ala.
LSU senior hitter Cati Leak was named to the 2015 Ohio Bobcat Invitational All-Tournament Team after averaging 3.73 kills and 4.27 digs per set in three games for the Tigers last weekend, capturing two double-doubles and earning season highs in both kills and digs by the end of the weekend and a points average of 4.32. Leak finished the week with 41 total kills and 47 digs in matches against Ohio, Michigan and Xavier, leading the team in kills while finishing second on the squad in digs. Against Michigan, she put away 19 kills with a .309 hitting percentage, while earning 20 digs against the Wolverines netting season highs in both. The very next day in the win over Xavier she had 15 kills and 16 digs, earning her third straight match with double-digit digs. Leak also led the team in service aces, earning five on the weekend for an average of 0.45.

Nominee for SEC Defensive Player of the Week

Haley Smith, DS, 5-4, Sr., Meraux, La.
LSU senior defensive specialist Haley Smith averaged 5.27 digs per set for LSU in its three matches in the 2015 Ohio Bobcat Invitational last weekend, leading the team in total digs and digs per set. Smith led the team in digs in all three matches against Ohio, Michigan and Xavier, including putting up consecutive matches with 20-plus digs. She dug up 22 against the Wolverines, adding a kill and four assists, while in the very next match she earned a season-high 24, serving up six assists with a service ace in the win over the Musketeers.

Notes on the Tigers
LSU plays its first two home matches of the 2015 season this weekend, hosting Purdue Friday night at 7 p.m. and Miami (FL) Sunday at 1 p.m. in the Maravich Center… Both matches will be streamed online on SEC Network+ through WatchESPN… The tournament features three total matches, with Miami and Purdue playing Saturday afternoon at 5 p.m.… Admission is free to all LSU matches… The Tigers are 1-5 on the season after going 1-2 at the 2015 Bobcat Invitational in Athens… LSU dropped matches to Ohio and Michigan before defeating Xavier to close play in the event… The Tigers finished with more kills than both Michigan and Xavier with 55 and 47 to 54 and 41… LSU held Xavier to a .072 hitting percentage in their contest Saturday, the lowest for an opponent so far this season… The 55 kills against the Wolverines are the most for the Tigers so far in 2015… LSU’s hitting percentage of .193 is their highest as a group, while their 18 attack errors are a season low… LSU has finished with as many or more service aces than their opponents in five of six matches so far this year… The team’s seven aces in the invitational finale tied their season high from the Rice match two weeks ago… The Tigers produced 99 and 80 digs, respectively, against Michigan and Xavier, their highest two-match total this season… Senior Cati Leak was named to the Bobcat Invitational All-Tournament Team after averaging 3.73 kills and 4.27 digs per set during the event… Leak produced double-doubles in two games and has them in four games this season… Leak’s 19 kills and .319 hitting percentage are both season highs… Leak and Katie Lindelow had 19 kills in the match against Michigan as they share the individual season high on the team… The 19 kills for Lindelow and 61 attempts were both career numbers… Freshman Toni Rodriguez earned her first LSU start on Saturday and finished with a new collegiate best 18 kills, four digs, assist and service ace… Emily Ehrle didn’t have a service ace coming into the season and in 2015 alone has six, including having two matches with at least two… Cheyenne Wood has produced double-digit assist matches in every game so far this year, serving up a new career best 26, earning her first collegiate double-double when added with her 12 digs as well… Lindsay Flory had her best match to date with 20 assists on 25 attempts against Michigan with three kills and six digs… The contest against Michigan was the first time that LSU had two players with at least 20 assists in a match since the 2012 season… Haley Smith has produced three matches with at least 20-digs, having 22 and 24 included over the weekend, with the latter being a new season high… Mimi Eugene has three matches with double figure digs, including earning a new career-high 19 on Friday… Tiara Gibson leads the team with 12 blocks so far, having three matches with three… Freshman Brittany Welsh is one block behind with 11, as Ehrle leads all players with three solo blocks.