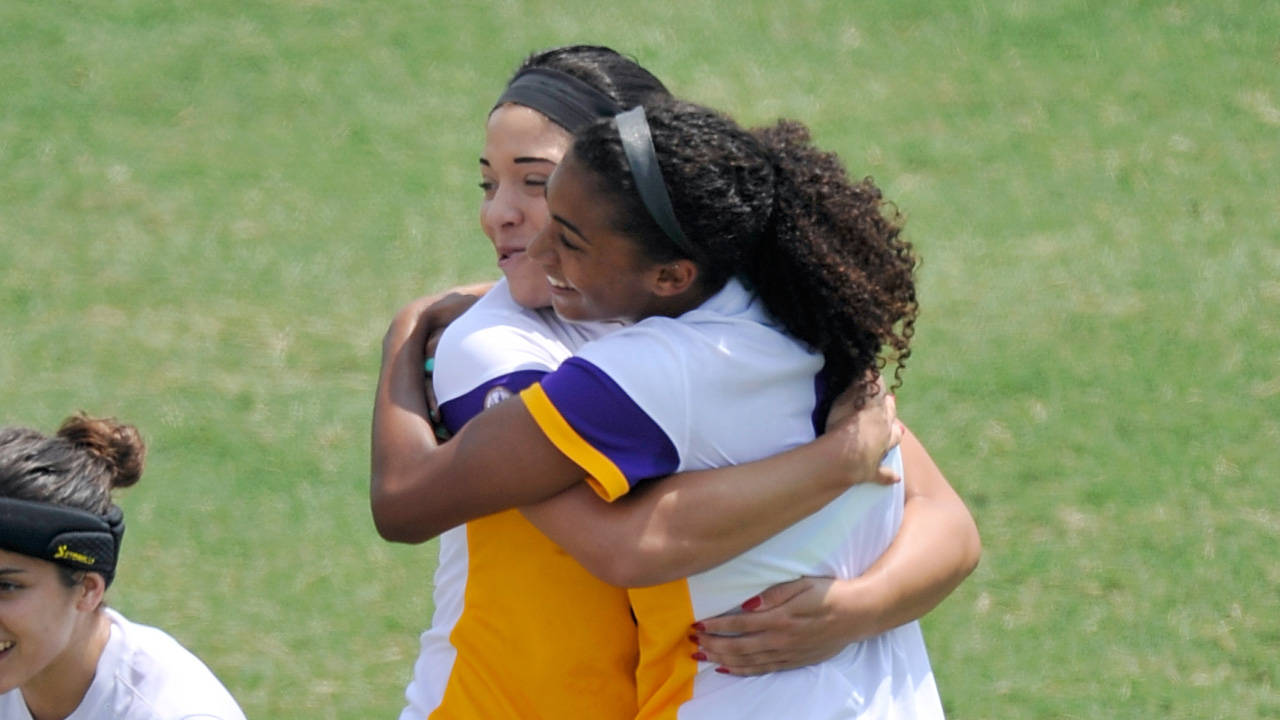 BATON ROUGE – Junior striker Summer Clarke and sophomore forward Jorian Baucom fueled a fluent offensive attack for the Tigers with two goals apiece as the home side remained unbeaten on the season with a decisive 4-0 victory over the visiting Indiana Hoosiers in Sunday’s “Stomp in the Swamp” finale at the LSU Soccer Stadium.

Clarke sparked a scoring barrage by the Tigers early in the match as she first found the scoresheet just seven minutes from the opening kick with a long-range effort for her second goal of the season.

With senior midfielder Natalia Gomez-Junco cutting open the Hoosier defense with a splitting pass to Clarke near the top of the box, the All-SEC standout cut inside on her left foot and curled her effort around a diving Indiana goalkeeper Sarah Stone and inside the left post from 20 yards out to give the hosts an early 1-0 lead at the 6:24 mark of the first half.

She wasted no time in doubling LSU’s advantage two minutes later when she pounced on a loose ball in the box from a Gomez-Junco corner kick and fired the ball home to put the Tigers two goals to the good inside of the first 10 minutes of the match. She tripled her goal tally for the season with her third goal of the campaign in the ninth minute.

Sophomore defender Jordane Carvery flicked Gomez-Junco’s corner kick into the six-yard box where senior midfielder Heather Magee was waiting to play it into space for Clarke’s finish to make it 2-0 in the match.

The Tigers extended their lead before the break thanks to Baucom’s converted penalty kick in the 24th minute when she stepped up to the spot and buried her attempt for her fifth goal of the season to push the Tiger lead to 3-0. Referee Daniel Radford pointed to the spot at the 23:16 mark when it was ruled Debbie Hahn‘s shot at goal was handled in the penalty area by one of the Indiana defenders.

“One of our team goals was just to start fast. So, that was kind of in the back of my head for the first half,” Clarke said following the match. “We had watched some film on them and noticed in other games they played that they had given the forwards a lot of time to turn. Our coaches just told us to go out and take advantage of that, so that’s what I tried to do as best I could.”

LSU’s first-half display was perhaps even more impressive that the Tigers ended a streak of 463 minutes played in which the Hoosiers had not allowed a goal to an opponent dating back to a 2-1 defeat to No. 13 Virginia Tech in their season opener on Aug. 21. Indiana entered the match with four clean sheets in their last four outings, including a pair of 1-0 wins over Missouri and Baylor last weekend.

“Oh, no. That’s news, I didn’t know that. Wow,” Clarke exclaimed when told by a reporter of Indiana’s scoreless streak entering the match. “That makes the win feel even better. I didn’t really know that.”

Clarke turned distributor on the final goal scored by the Tigers on the afternoon when she played Baucom in behind the Hoosier defense in the left side of the area for a touch toward Stone charging out of her net and a clinical left-footed finish inside the right post to push LSU’s lead to 4-0 early in the second half in the 50th minute.

Baucom continued her hot start to the season with her first multi-goal game of the campaign to push her team-leading tally to six goals in six matches, including a pair of game-winning goals in LSU’s 2-1 season-opening win at Oregon on Aug. 21 and 1-0 shutout of Minnesota on Aug. 30 to wrap up last weekend’s “Battle on the Bayou.” She has added a pair of assists for a team-leading 14 points on the season.

Clarke’s performance earned her a selection as the Offensive Most Valuable Player at the “Stomp in the Swamp,” while Baucom was also named to the All-Tournament Team just one week after she was named as the Offensive MVP at the “Battle on the Bayou” in leading the LSU attack.

Senior defender Alex Arlitt picked up her second Defensive MVP award in as many weeks as she again led a defensive display that earned the Tigers their second shutout of a Big Ten opponent in consecutive weeks in Baton Rouge. Before their 4-0 defeat of Indiana on Sunday afternoon, the Tigers kept their first clean sheet of the season with a 1-0 win over Minnesota a week ago.

Also named to the “Stomp in the Swamp” All-Tournament Team for their performance on the weekend were Gomez-Junco and Magee along with senior goalkeeper Catalina Rubiano as an anchor in defense.

“I’ve definitely had to step it up, I didn’t used to be a very vocal player,” Arlitt said of her leadership in defense this season. “This year, I’ve needed to step up and communicate with the back line. I think it’s helping out a lot. I think that another really big reason why we’ve had success is because other people on the team, it’s not just me, are being encouraged to step up and have that same level of communication.”

Sunday’s match marked the first ever meeting between the two sides on the soccer pitch as the Tigers (4-0-2) struck early and often in knocking off the Hoosiers (3-2-1) to claim the “Stomp in the Swamp” team title as they also leveled their all-time record at 3-3 against opponents from the Big Ten Conference.

The Tigers are off to their fourth-best start to a season in the 21 years of the program’s history while remaining unbeaten through their first six games for the first time since 2008 when they won seven-straight to start that campaign. They also fired out of the blocks to a 5-0-1 start in six matches in 2004 and a 6-0-2 start in eight matches in 2007 for their longest unbeaten run to open a campaign.

Their victory over Indiana also marked a milestone for head coach Brian Lee as it was the 250th win of his coaching career spanning 10 seasons at Furman from 1995-2004 and 11 seasons at LSU since 2005.

The Tigers will return to action next weekend with a trip to Tuscaloosa, Alabama, on Friday night as they open their Southeastern Conference season against the Alabama Crimson Tide in a match that is set to kick off at 7 p.m. CT on the SEC Network+. They return home next Sunday to host nationally-ranked Duke on Sunday Funday No. 3 with kickoff set for Noon CT at the LSU Soccer Stadium in Baton Rouge.

“We’re going into SEC play, and we feel like we’re prepared for it,” Lee said looking ahead to Alabama next weekend. “That’s why we play Oregon, Minnesota, Indiana. We want to see big conference teams, athletic teams that train year round and really get after it on and off the field. We feel like now we’re prepped and ready for the SEC games. We’ve got to go down there and travel, take care of our bodies this week, get some good training in this week and be ready to go on Friday night.”