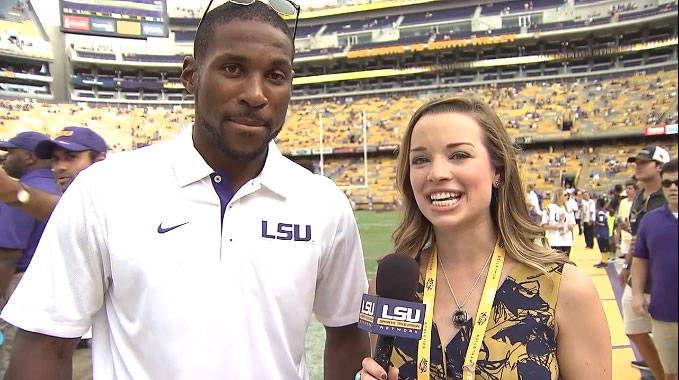 BATON ROUGE – LSU All-American Patrick Peterson has made a $1 million commitment to his alma mater, making it one of the largest single contributions to athletics by a former LSU student-athlete.

Peterson’s gift includes $500,000 in cash with another $500,000 in planned giving. Peterson’s pledge will go toward the renovation of the LSU Football Operations Center.

“We are very proud and appreciative of Patrick and his family for this amazing gift,” LSU vice chancellor and director of athletics Joe Alleva said. “Patrick is a great ambassador for LSU and a serves as a tremendous role model for our players.

“We watch him on Sunday’s in the NFL with great pride knowing that he’s part of the LSU family. This gift demonstrates Patrick’s commitment to his school and the passion that he has for LSU. We are very fortunate to have Patrick Peterson on our team.”

As part of Peterson’s donation, LSU will name the new weight room at the Football Operations Building, “The Peterson-Roberts Weight Room”. Local businessman Dave Roberts made a $1 million contribution to the weight room as part of the Peterson Promise, which is the name of the fund established by the Peterson family.

“I want to set an example and challenge other former players to give back to our great University,” Peterson said. “LSU is a wonderful place that helped me develop into the person that I am today. I hope that my donation will encourage and inspire other former student-athletes to give back.”

Peterson remains the most decorated defensive back in school history, earning numerous All-America honors as a junior in 2010. He also claimed a pair of national awards in 2010 – the Bednarik and Thorpe – and was selected with the fifth overall pick in the 2011 NFL Draft.

Peterson is currently in is fifth year with the Arizona Cardinals and is considered one of the top defensive backs in the NFL.

Peterson will be recognized on the field during the first half of LSU’s season-opening contest against McNeese State.