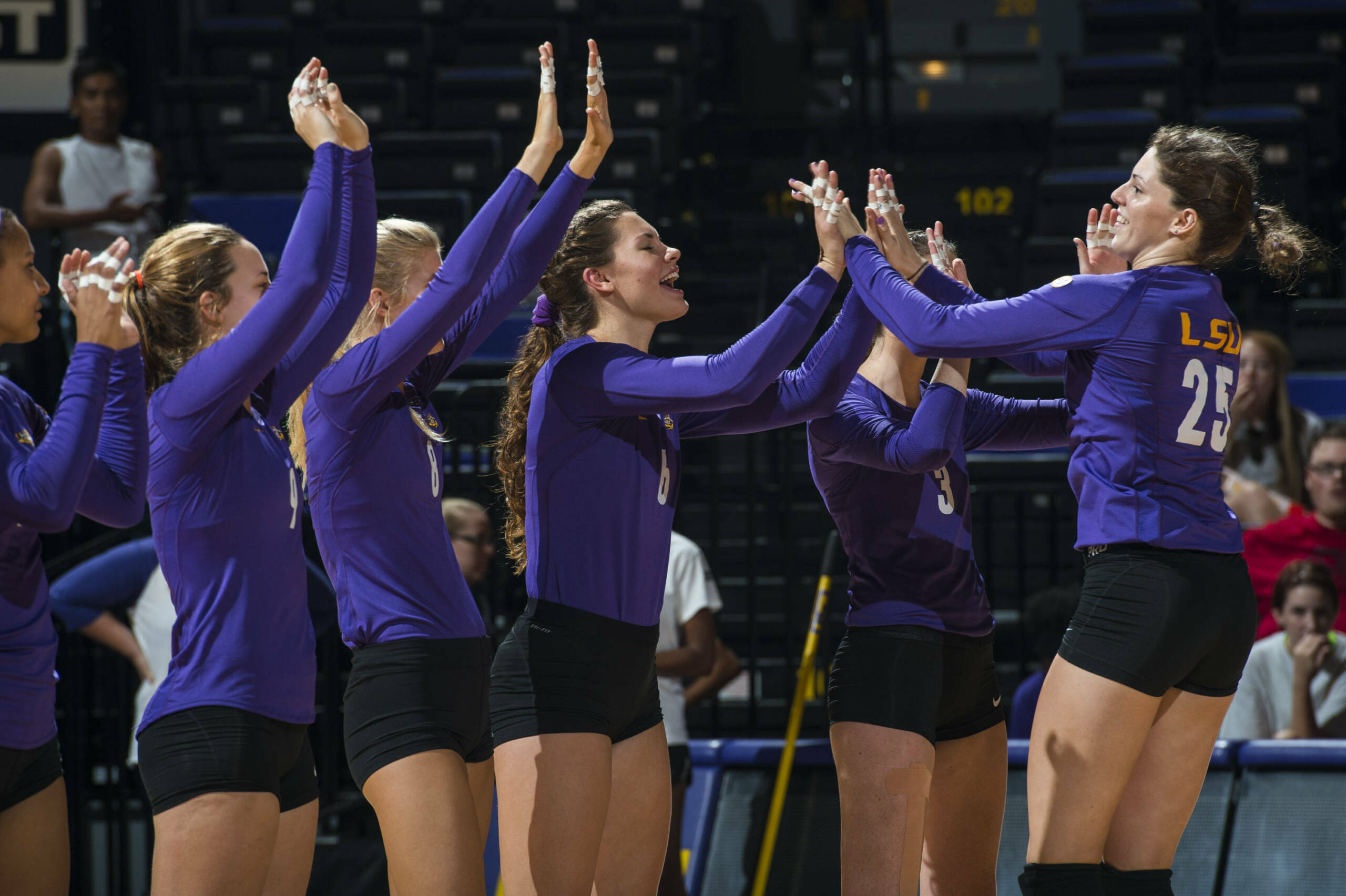 ATHENS, Ohio – A tense point change in the second set after dropping the first would be the thing the LSU volleyball team needed to take the next three in order in defeating the Xavier Musketeers in four sets (21-25, 25-14, 25-22, 25-18) Saturday at the Convocation Center in Athens to close play in the 2015 Bobcat Invitational.

LSU (1-5) finished the day hitting .193 while holding the Musketeers (2-4) to a .072 hitting clip thanks to 80 digs and five total team blocks as Xavier hit into 29 attacking errors. After hitting in the negatives in the first set, LSU hit .391 and .286 in the second and third, earning double-digit kills in each of the final three sets to earn the victory.

In her first start of the season, freshman Toni Rodriguez powered LSU offensively with a match-high 18 kills and a .235 hitting percentage, to go along with four digs an assist and a service ace to account for 19 points. She was joined in double figure kills by Cati Leak who earned another double-double on the weekend as she ended the day with 15 kills on a .208 hitting percentage with 16 digs, two aces and a block.

Cheyenne Wood had 20 assists in the win for the Tigers, while Lindsay Flory had eight and Elly Ogle had seven. Haley Smith earned her second consecutive 20-plus dig match, leading all players with 24 in the win while also adding six assists and a service ace.

Ogle and Tiara Gibson combined to lead the team in blocks with three each, while Emily Ehrle had two blocks to go along with her two service aces.

The Tigers worked to get the first two points of the match after a Leak kill and Xavier attack error, but not before the Musketeers rattled off the next three to take the lead with the Tigers tying it up on an Ogle kill at 3-3. However from that point, Xavier earned the next four points to go up 7-3 to get some space between them and the Tigers.

Undeterred, LSU stormed back getting five in a row to take the lead back to go up 8-7. The two sides flirted with brief leads, but with the set tied at nine, LSU got an ace from Rodriguez, unforced Xavier error and another kill to go up three at 12-9. That theme would prove to be prevalent for the opposition as LSU raced out even further scoring four of the next six to take a 16-11 lead over Xavier to force them into a timeout.

Xavier refused to quit, however, forging out on a 6-1 run to tie the match, while going on an eight-point tear to go on top 19-17 and forcing LSU into its second timeout of the set. That rally gave the Musketeers the momentum back as Xavier got to set point and held off LSU from mounting a comeback of their own to take the opener 25-21.

A controversial point early in the second set served as a rallying cry for the Tigers in the opening points of the second set for the Tigers, as a point was overturned and given to Rodriguez on a kill to give LSU a 3-2 lead. With the set then tied at 5-5, LSU reeled off four consecutive points, getting two Xavier attack errors, Ehrle service ace and Eugene kill to go up 9-5 and force a Musketeer timeout.

Xavier was able to pull within two of the Tigers at 10-8, but from that point on LSU took control scoring eight of the next nine points to take an 18-11 lead and force the visitors into their second timeout of the frame. The Tigers went on to hold the Musketeers to just three more points for the rest of the set, cruising to the 25-14 set win to tie the match at one set a piece.

With the two sides locked in a duel, the opening minutes of the third would help carry that same trend as the two sides did not give up an inch to the other early. But with a slim two point lead for the Musketeers at 5-3, LSU would go on to score seven of the next nine to go up 10-7 and force Xavier into a timeout.

Still, Xavier found a way to fight back and knot the set at 12-12, but not before the Tigers went off on a tear scoring five straight to take a 17-12 lead. The lead was not safe for LSU for long, as Xavier rallied to net eight of the next 11 points to tie the third at 20-20, taking the lead at 21-20 to force LSU into another timeout after an attack error.

The break helped as LSU got the next three points to go up 23-21 and put Xavier back on its heels to force them into a timeout of their own. An attacking error put LSU on the brink, earning the winning point two points later to take a 2-1 lead with a 25-22 set win.

Xavier grabbed ahold of the momentum to open the fourth set, going up 5-2 just after the first seven points. However, LSU rallied once again, scoring three straight points highlighted by a Kelly Quinn service ace to tie the set at 5-5. There would be six more ties from that juncture of the fourth, with the two teams drawing at 12-12 until a Rodriguez kill gave LSU the lead at 13-12.

By the time they were done the Tigers had rolled up four consecutive points to go up 17-13 and it would be the streak they needed to go on a roll getting to 20 points leading 20-14 at that point, going on to snap a Xavier rally in its tracks to go on and take the fourth 25-18 to earn their first victory of the season.

LSU returns to action next Friday, opening the home slate with the Purdue Boilermakers at 7 p.m. inside the Maravich Center. The game will be streamed live on SEC Network+ through WatchESPN.