Volleyball Falls to Michigan on Four 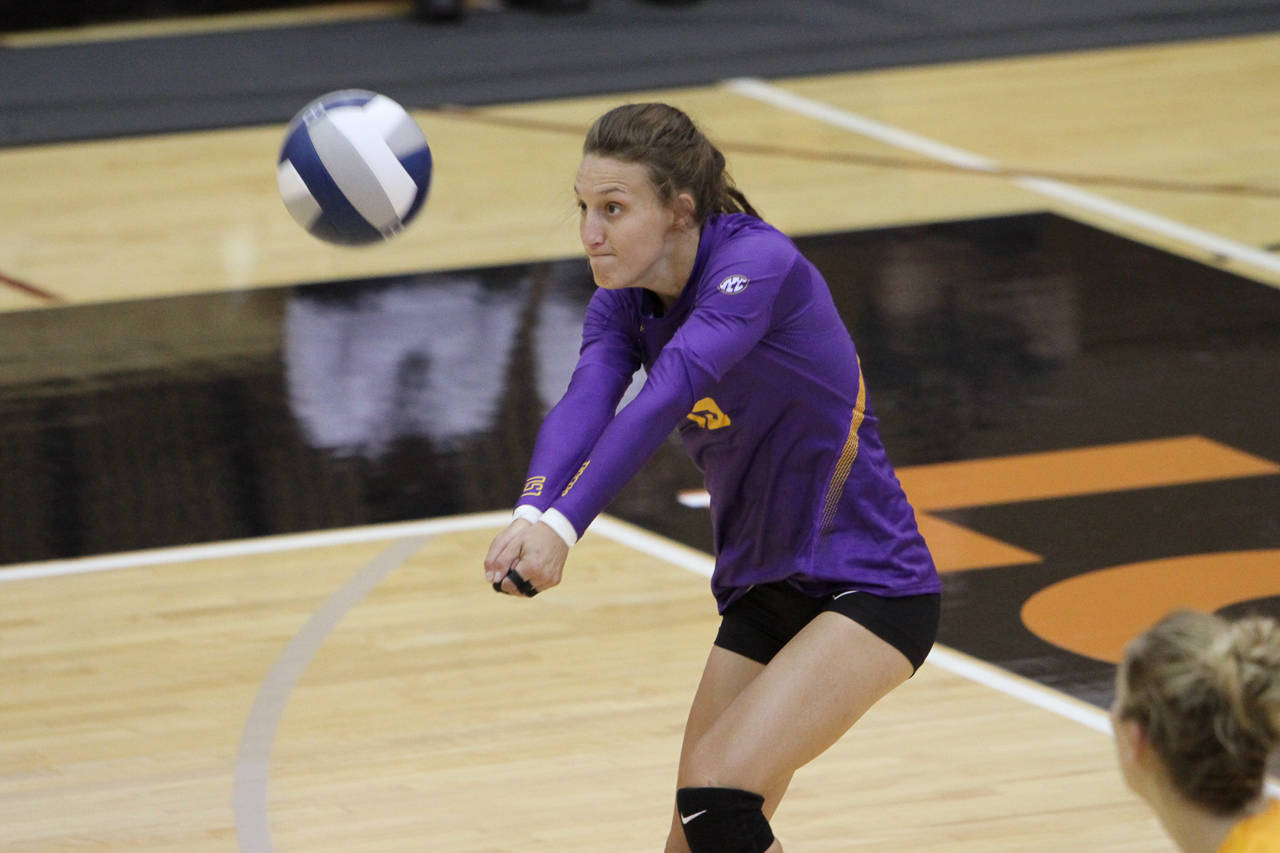 ATHENS, Ohio – In their second match on the opening day of the Bobcat Invitational, the LSU volleyball team came out fighting against the Michigan Wolverines, taking a set off of the Big Ten foe before falling in four sets 25-14, 25-23, 20-25, 25-16 inside the Convocation Center.

Sputtering offensively after the first set of action, the Tigers (0-5) came to life in a big way on both the attack and defensively, earning 55 kills while finishing with 99 digs as a squad in the four sets of action. By the end of the night LSU had five players finish with double-digit digs, while getting 38 of their 55 kills from two players.

The two players to earn that feat had solid nights in seniors Cati Leak and Katie Lindelow. Both earned double-doubles as Leak finished with 20 digs and Lindelow with 13 to go along with their 19 kills each. Leak also chipped in both of the squad’s two service aces which came back-to-back as well as two blocks.

Cheyenne Wood and Lindsay Flory each earned season-highs in assists for LSU, with Wood producing 26 while pulling 12 digs for her first collegiate double-double, while Flory had 20, three kills and six digs.

Haley Smith earned her second 20-plus dig match of the season against the Wolverines, earning 22 with four assists and a kill. The final player to earn double-digit digs was Mimi Eugene who earned a career-high 19 Saturday evening. Freshman Brittany Welsh had three blocks to lead the group as LSU finished with four.

Caroline Knop for Michigan had 14 kills and 17 digs for Michigan, while Carly Warner had 31 assists and 20 digs in the match. Tiffany Morales had 22 digs for the Wolverines with four assists.

The two teams played to a spirited and close opening set to open the second match of the day for both teams. Neither side gave an inch early; with knotted scores up until the 8-8 mark of the frame before Michigan was able to go on a five-point swing to take a 13-8 lead forcing an LSU timeout. Michigan would get the point out of the break before a Flory kill ended the run for the Wolverines.

An attack error would cut the Michigan lead to just four, but not before Michigan rattled off three more points to go up 17-10 to extend the lead. From there, LSU faced an uphill climb to get back into the match, as Michigan continued to slowly chip away before the Tigers would need to call another timeout down seven at 19-12. Points would be hard to come by for the team, as Michigan went on to take the first set 25-14.

Even after a close opener, 20 points wouldn’t be enough to separate the two teams at the start of the second set, as the two sides played to a 10-10 draw. Michigan and LSU traded leads throughout this stretch, with neither allowing the other to gain more than a point separating the two, until consecutive attacking errors gave LSU a 14-12 lead.

A Leak kill pushed LSU to the 15-point barrier first at 15-13, but from that point the Tigers had to weather the Wolverine attack as Michigan would claw back to tie before LSU would go up again. Going back up two at 18-16, after a service error, a big swing from Eugene made it 19-17 in favor of LSU. A Welsh kill brought the Tigers five away from the set at 20-18, forcing the Wolverines into using their first timeout of the match down 21-19.

However, Michigan went on the offensive scoring three of the next four to tie the set at 22, with an attack error by the Tigers giving the other side a 23-22 lead and forcing LSU into a timeout. Michigan got on the brink of set point going up 24-22, but not before an attack error gave the Tigers some life to pull within one. Unfortunately, an attack error for LSU ended the set in favor of Michigan 25-23 for the Wolverines to go up 2-0 in the match.

The start that the two teams had in the first two sets was nowhere to be found in the start of the third, as the Tigers broke a 3-all tie thanks to a pair of kills from Leak and Flory to go up 5-3. That quick burst allowed LSU to gain enough distance between themselves and Michigan, getting to the 10-point mark first up 10-7.

Still, Michigan found a way to pull within one at 10-9 for a small rally, stopped by a Lindelow kill that ignited an LSU rally when added with consecutive Leak aces to make it 13-9 to force Michigan into a timeout. The Tigers would be able to push their lead all the way to five going up 16-11 in the frame, their largest of the match.

It would take withstanding another small Michigan rally, but this lead the Tigers would not relinquish taking the third set 25-20, finishing it off with a Leak kill.

The Tigers wouldn’t be able to carry that momentum over to the early minutes fourth, as Michigan earned eight of the first 10 points to take an 8-2 lead over LSU and force the Tigers into their first timeout of the set. A 6-4 run by LSU pulled the Tigers within two down 13-11 to threaten the Wolverine lead, but a three-point swing by Michigan forced LSU into its final timeout down 16-11.

By that point, Michigan was beginning to fire on all cylinders offensively, jutting out to a 21-13 lead over the Tigers, holding firm even after a string of points by LSU to gain enough of a lead and hold on to take the fourth 25-16 and earn the win.

LSU will close the 2015 Bobcat Invitational Saturday morning, taking on the Xavier Musketeers at 9:30 a.m. CT in Athens.