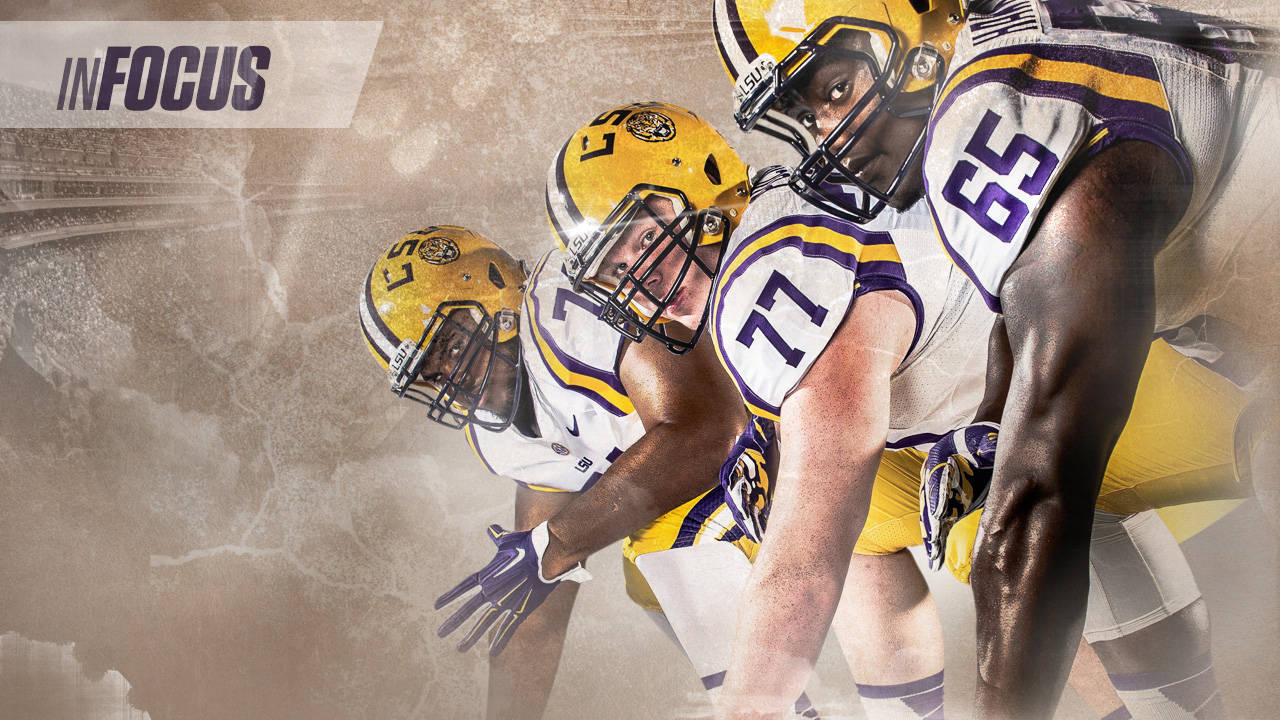 When the sun finds its home in the western sky, and it once again becomes Saturday night in Death Valley, these men will go to battle. They will fight their way through the trenches to lead their team to victory. They may not receive the glory of a quarterback, but they are vital to the team’s success. They are the offensive line.

The offensive line must work together more so than any other position group in the sport. Because of this, it is crucial that in every season leaders emerge. With a combined 63 starts among them, senior offensive tackle Vadal Alexander, junior center Ethan Pocic and junior offensive tackle Jerald Hawkins are in position to take the lead.

“We want to take charge and take that leadership to be the head of the team,” Hawkins said.

“I feel like we are the leaders of the team,” Alexander said. “I think our play will speak for itself.”

This trio has an average height over 6’6”, and they have a combined weight of nearly 1000 pounds. With so much size and experience, expectations are sky high for this unit, which can create pressure on any athlete. However, these Tigers are ready to perform at the highest of levels.

“This is probably the best in shape offensive line I have been a part of since I’ve been at LSU,” Alexander said. “We are very athletic and very in shape. In my opinion, we are one of the top groups on the team.”

Pocic, who accounted for 72.5 knockdown blocks last season, said he wants the offensive line to be the strength of the team.

“That’s our goal,” Pocic said. “That’s what we work toward every day.”

Sophomore running back Leonard Fournette is returning from a freshman campaign where he set the LSU school record for freshman rushing yardage. He said he feels this year’s offensive live has improved and will give him an opportunity to top his performance from a season ago.

“They are bigger, stronger, and I would say faster,” Fournette said.

One of the concerns going into this season was how Hawkins would handle the switch from right tackle to left tackle. The left tackle is in charge of protecting the quarterback’s blindside, which can be daunting to even the best of players.

But, according to all reports Hawkins has made a seamless transition to the left side and is ready for a big season.

“He is such a great athlete,” freshman offensive lineman Will Clapp said. “Switching sides for him wasn’t even a big deal. Back when we switched him in the spring, he looked like he had already been playing it for two or three years.”

“I believe the transition has gone great,” Hawkins said. “The big difference to me has been the stance. Everything else falls into place. It comes naturally.”

Both Hawkins and Alexander had an opportunity to go to the NFL after last season, but instead chose to return to LSU. They each said they have unfinished business left both on and off the field.

“There were a lot of different things I could gain from coming back,” Alexander said. “I’m not only getting another year gaining technique and getting better as a player, but also fighting for a national championship. I feel like this team has a very good chance of that.

“Graduating is another big thing for me,” Alexander said.  “One of my main goals is to graduate.”

Hawkins had a similar stance on why he decided to delay his NFL opportunity. The ability to obtain a degree played a major role in his decision Hawkins said, but he also wanted the chance to be a part of something great this season.

“I feel like with this team we had something special left,” Hawkins said. “We left something on the table. I wanted to make sure I was there to make everyone around me even better.”

“Having them coming back added a lot of experience not only to the offensive line, but also to the team,” Pocic said.

This offensive line group realizes how crucial it is for them to function as a cohesive unit. On any given play, if one guy is not on the same page it can botch an entire blocking scheme.

That is why this group has strived to not only communicate well with each other but also form a strong bond.

“It’s a brotherhood really,” Pocic explained. “We’re all best friends. We’re hard on each other but at the same time, we love each other. We’re brothers out there.”

“We all clown together, and we all chill together” Hawkins said. “We’re like a brotherhood.”

Clapp added that the offensive line will regularly go out as a group and have what he called “O-line days.” At these events they will go to the pool or go jet skiing on the river in part to have a good time, but also to assure camaraderie is in no short supply among them.

The chemistry they have developed has been paying dividends on the practice field, according to Fournette.

“It shows in practice how much they communicate together,” Fournette said. “They help the quarterback out, too, by picking up reads that he doesn’t notice or he couldn’t pick up.”

At every practice, there is a play where the snap is rushed, and there is not enough time to verbally make the call. But, the group is always on the same page and makes the proper adjustments every time, according to Hawkins.

These Tigers are certainly very eager for their return to Death Valley when they take the field against McNeese State.

“I don’t know how long it’s been, but it’s been too long since we’ve played at Tiger Stadium,” Pocic said

“I just can’t wait to play these guys,” Hawkins said. “I even played against a few of them in high school.”

“It’s a surreal feeling, Alexander said.  “It’s so loud. You’re so hyped. You’re so focused that you don’t hear anything. Until you get that first contact on the first play, it’s kind of jittery. ”

They are the heart and soul of every good offense. They protect the quarterback. They create holes for the running backs. They provide time for the punters and kickers to get the ball off. They are the team’s anchor. They are the offensive line.