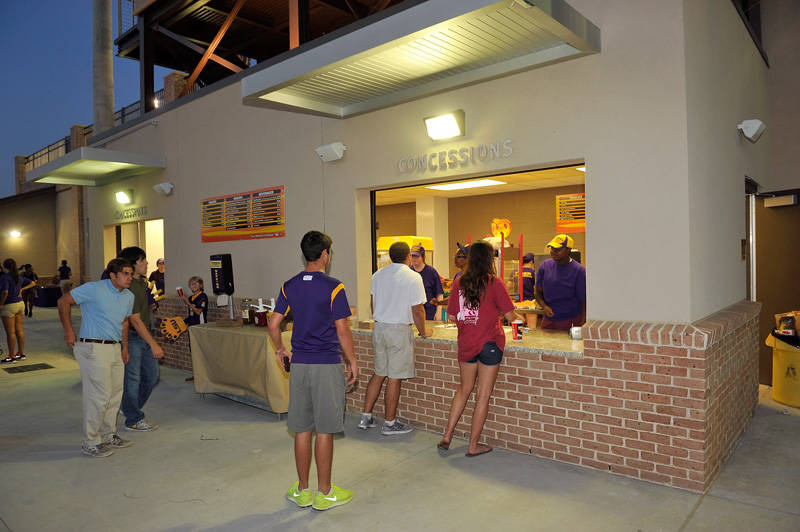 Behind the scenes another team of workers representing Tiger Concessions is working just as hard to make sure those inside and outside the venerable venue has a great experience when it comes to food.

This year, Tiger Concessions workers and the many members of the non-profit groups that staff the majority of the stands around in and around Tiger Stadium will be wearing new collared polo shirts with one slogan: “We Feed Tigers!”

The numbers are astounding. Over the course of a home game, the amounts of product distributed and the supplies needed is astronomical. For example:

Those numbers can be staggering. Every hot dog, every peanut bag, etc., is stocked, inventoried, placed in stands, sold and distributed by a staff of 1,400 on game day.

“The Tiger Concession team has been working diligently to prepare for the 2015 Football season,” said Jack Cruise, Senior Director of Operations for Tiger Concessions. “We are excited to continue the tradition of providing the best food and beverage options for the Tiger fans. We welcome back the fans with all their old favorites, as well as some great new local fare to satisfy and delight hungry game goers. The motto we live by, ‘We feed Tigers,’ ensures that we are focused on our game plan to take the best possible care of our guests!”

Tiger fans know the game day experience starts long before kickoff in the stadium. There is the pre-game ritual of visiting and hanging out with friends and of course, eating.

This year, fans can enjoy a wide array of offerings from vendors in the areas of the South Stadium mounted plane and the Pete Maravich Assembly Center on North Stadium. The variety of food will range from Mexican to Cajun to American favorites.

One new option in the stadium this year will be the “bottomless popcorn bucket” that can be refilled and enjoyed for the duration of the game. There are also commemorative 2015 LSU Football cups featuring running back Leonard Fournette and Kendell Beckwith that will be available.

Also just like last season, there will be many new concepts in various locations including high quality burgers by Smashburger and freshly battered and fried chicken tenders being offered on the South and East concourses, and new loaded pulled pork nachos.

Helping to cool things on a hot day or during a hot game are healthy Smoothie King Smoothies, frozen pint size Snow-Ball-To-Go (available in 10 locations) and of course various Coca-Cola products.

So enjoy the football this fall and make the choices of Tiger Concessions both inside and outside Tiger Stadium a part of your Saturday plans.

This Week: A profile of LSU wide receiver Jack Bech; Inside the Film Room with running back Ty Davis-Price; a visit with LSU soccer player Athena Kuehn; and an inside look at the 85-year history of Mike The Tiger as LSU’s mascot.
2021 LSU Halloween Boo-zar

In what has become a Halloween Tradition on campus, LSU student-athletes, coaches and staff members distributed candy and played games with children at the Halloween Boo-Zar on Sorority Row Sunday afternoon.
Skip To Main Content