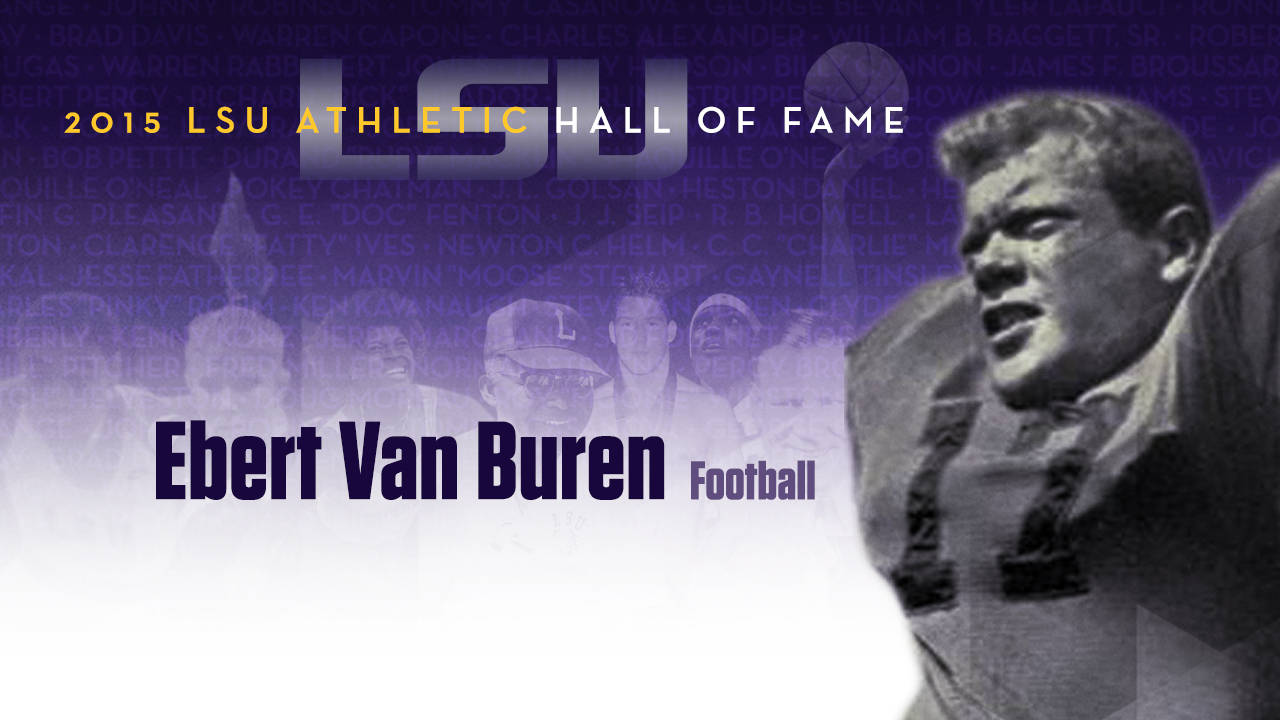 LSU is known for its beautiful scenery off the mighty Mississippi River, the aroma of savory jambalaya while tailgating on Saturdays, and the success and titles that come along with prominent athletic programs. But what makes LSU so special are the people, such as former football player Ebert Van Buren.

Van Buren, whose older brother, Steve, is a member of the LSU and NFL Halls of Fame, was born in Honduras and moved to New Orleans in the early 1940s. Before playing football for the Tigers, he served in the U.S. Army as a PFC in the 96th Infantry during World War II.

During his four years of service, Van Buren was awarded the Combat Infantry Badge, two Bronze Stars for valor and heroism and the Purple Heart. He was wounded in Okinawa and returned home to New Orleans.

“I finished high school and then went to LSU in the spring,” Van Buren said. “I had not played football when I first enrolled at LSU. I was a walk-on and had no experience.”

From pickup games on the playground to college football, it was an adjustment for Van Buren in conditioning and in learning the game.

“I remember an incident when we were at practice with Bernie Moore as coach,” Van Buren recalled. “He told me to go out in the flat and catch a pass. I ran over the goal line. Of course, that was a mistake. I got back in the huddle and Coach said, ‘I told you to go in the flat.’ I said, ‘Coach I don’t even know where that is.’”

It didn’t take long for Van Buren to catch on to the game. He earned three letters as he played on both sides of the ball as a fullback and linebacker. He helped lead the 1949 Tigers to a Sugar Bowl berth, as the squad posted wins over three different conference champions to the bowl invitation. One of the highlights of the season was a 34-0 victory over Texas A&M, as Van Buren rushed for 121 yards in the rout.

Van Buren said one of the best moments of his career was his selection as LSU team captain for the 1950 season.

“That meant a lot to me,” Van Buren explained. “I started off not knowing anything. The players who came to LSU were high school stars, and I was elected captain of the team over them.”

At the end of the 1950 season Van Buren was invited to play in the Shrine Bowl and the Senior Bowl. After his impressive career in college football, he was the No. 1 draft choice of the Philadelphia Eagles in 1951.

Van Buren played for the Eagles for three years and was selected to the NFL Pro Bowl Team in 1952.

“I loved playing in the NFL because I loved the contact,” Van Buren said. “I was a linebacker. Really, I could play defense or offense. I played everything. I finally settled down and played on defense. They would just put me in occasionally on offense, but primarily I was at linebacker.”

Following his NFL career, Van Buren returned to LSU to earn his master’s in psychology in 1961. He began a private practice in which he specialized in working with autistic and special needs children. He also served as the Disability Determination spokesperson for the state of Louisiana, and he worked as a psychologist for the Winn Correction Center.

Van Buren also worked for eight years as Ouachita Parish Coroner and he served as a Lt. Commander in the U.S. Naval Reserve from 1972 to 1980. On top of his private practice and military service, he earned his certification as a scuba diving instructor and taught at UL-Monroe, the YMCA and Louisiana College for 41 years, emphasizing the need for ocean and reef conservation.

Now 90 years old, Van Buren still maintains a private practice at The Stress Clinic in Monroe, La., where he sees patients on a regular basis.

Van Buren’s eventful life story is one that LSU is proud to share and acknowledge. His remarkable career and accomplishments have earned him a place in the LSU Athletic Hall of Fame.