Football Closes in on Season Opener 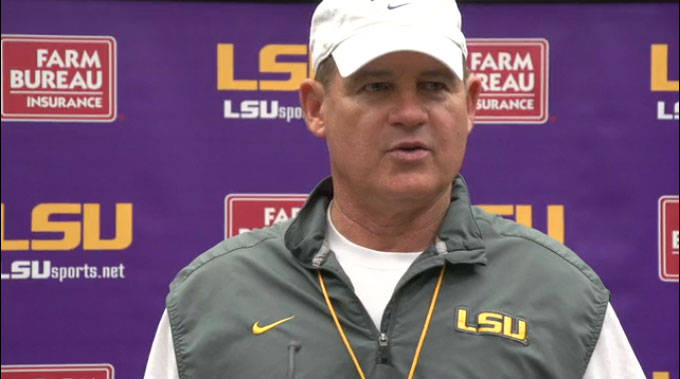 BATON ROUGE – A month of preseason practice is nearly complete as the 13th-ranked Tigers went through one of its final days of preparation for the season-opener here Wednesday afternoon at the Charles McClendon Practice Facility.

Rain showers forced the Tigers indoors on Wednesday as the Tigers worked out in helmets and shorts. LSU will practice again on Thursday afternoon in shorts and helmets followed by a walk-through on Friday.

LSU opens its 11th season under Les Miles on Saturday evening in Tiger Stadium when the Tigers host McNeese State. Kickoff is scheduled for 6:39 p.m. and the game will be televised on the SEC Network alternate channel.

“We’ve had a good camp and today was a lively practice,” Miles said. “We’ve put in a lot of work getting ready for the season and we are looking forward to getting the season started on Saturday night in Tiger Stadium.”

Saturday’s meeting will be just the second between LSU and McNeese. The Tigers won the previous meeting 32-10 in Tiger Stadium. The McNeese game will also mark the first start in Tiger Stadium for quarterback Brandon Harris. Harris will be making just his second career starter after winning the job with his performance during the offseason and preseason practice.

“Brandon has continued to improve,” Miles said. “The more reps he gets the better he gets and the more comfortable he becomes. I think it becomes more natural for him the more he’s on the field.”

Miles also announced that redshirt freshman Will Clapp will start at left guard, while junior Josh Boutte will start at the right guard spot. Miles noted that true freshman Maea Teuhema will play against McNeese as well.

“I feel pretty good to be honest with you,” Miles said. “I haven’t run a marathon or anything quite that exhausting. I feel pretty good. I have had some players ask ‘hey coach how are you feeling’. I tell them well I’m feeling ok. I think some of them are thinking they can get a couple of easy practices here if the old guy goes down.”
Miles said that he’s eager to get the season started and that he likes what he’s seen out of his team up to this point.

“I like the position we are in,” Miles said. “I think our improvement is at a point where if we continue to improve like we have, we can be as talented as most, if not all. It’s fundamental to every team in the country right now. Those teams that get better faster and recognize what they need to do to have a competitive advantage are the teams that will win. We’re not unlike a host of teams in the upper division.”