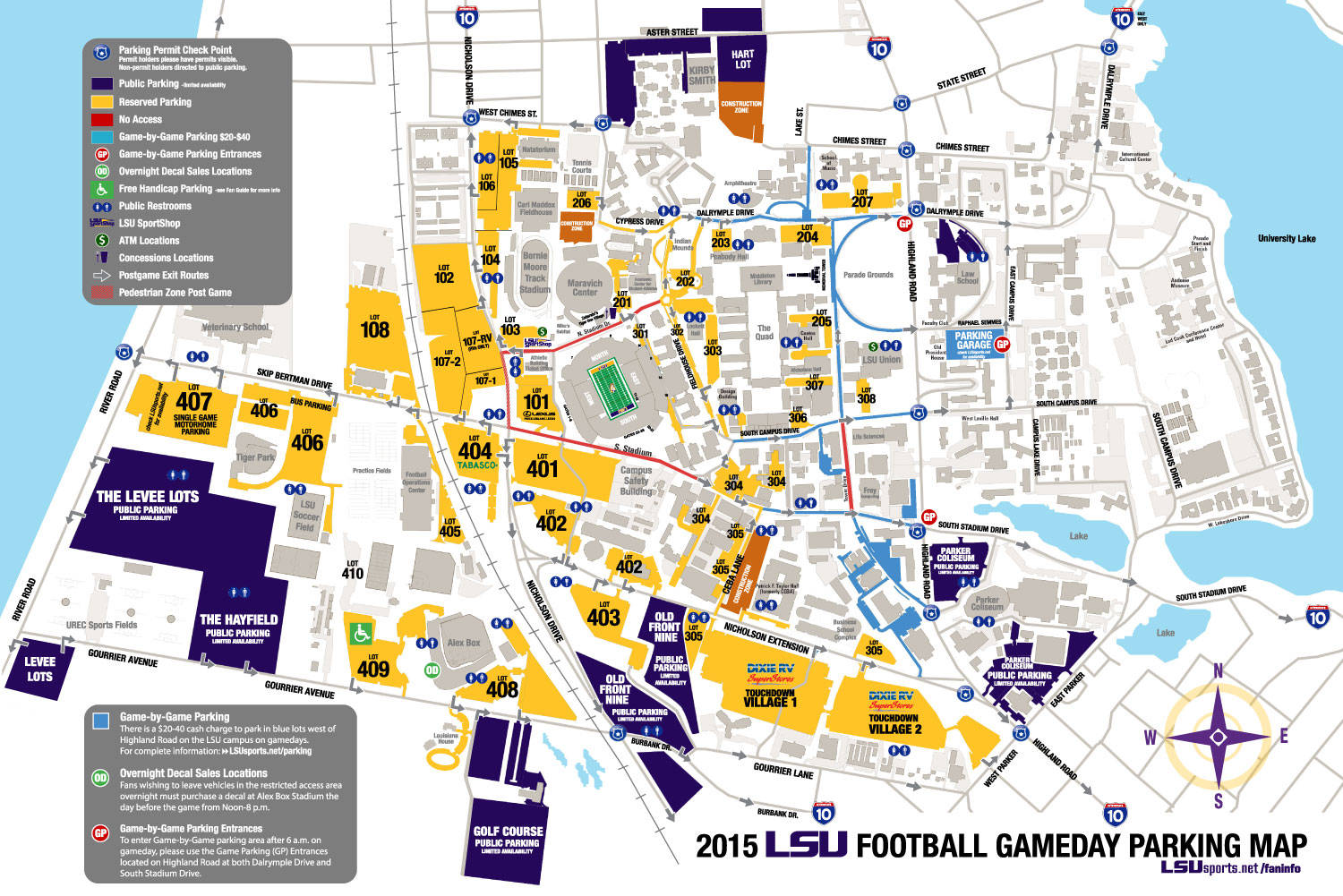 BATON ROUGE – LSU opens the 2015 season on Saturday against McNeese State in Tiger Stadium and those fans coming to campus for the season-opener should be aware of some enhancements and updates to traffic flow and parking this year.

One of the major changes from last year is that contraflow will no longer be used on Nicholson Drive/Highway 30. Instead, LSU will take advantage of Burbank Drive and utilize that four-lane road to move as much traffic away from campus in an efficient manner.

Law enforcement officials feel as if Burbank Drive will be able to move more cars in a timely fashion toward exiting city routes with better access to neighborhoods and the interstate. Nicholson Drive will still be used for fans exiting campus, however it will no longer be done by contraflow.

“Our goal is to create a steady flow of moving traffic and to avoid that ‘stop-n-go’ effect,” LSU assistant athletic director David Taylor said. “We are trying to move as many vehicles as possible away from campus and to their final destination in a safe and efficient manner.

“We need everyone involved in the process to be patient and cooperative. Getting thousands of cars off campus takes time, but we are confident that this plan will allow us to keep vehicles moving and hopefully be a better experience for our fans.”

Here are some other updates and adjustments for the 2015 season:

Traffic and Parking Update
LSU continues to increase and enhance its pregame communication to fans through email, social media and www.LSUsports.net/parking with suggested incoming routes, current conditions, and any other adjustments on gameday. LSU will post traffic and parking lot updates throughout the day on Twitter at @LSUsports.

Parking Lot Updates for 2015
– LSU has added parking for all SEC games at the University Recreation Fields off Gourrier (public)
– LSU will also continue to utilize the LSU Golf Course Driving Range for all games (public)
– LSU will maximize current on-campus parking space with additional personnel and painting of spaces in public parking lots.

Postgame Traffic
LSU will enforce directional exiting from parking lots. Personnel from multiple state and local agencies will work jointly to assist fans with exiting into the correct post-game direction.

Street Parking Not Allowed on Burbank and Nicholson
For safety concerns, street parking will still not be allowed on Nicholson Drive/Highway 30 and Burbank Drive south of Skip Bertman Drive. Tailgating is allowed in the grass areas adjacent to Nicholson Drive, however, vehicles will not be allowed to park in this area. Fans tailgating in these areas are encouraged to use the Old Front Nine free parking lot.

Pedestrian Buffer Zone on Nicholson
A pedestrian buffer zone will remain in effect on Nicholson Drive for fans exiting Tiger Stadium heading west. Nicholson Drive between North Stadium and South Stadium Drive will have no post-game vehicular traffic. Traffic will be forced north and south at these streets with no cross traffic allowed. This operation will allow fans to cross Nicholson Drive without competing vehicular traffic as well as assisting with the forced directional exit in the parking lots around the stadium.

Fans are reminded and encouraged to check www.LSUsports.net/parking for up to date information including a new interactive parking map and traffic flow map, as well as other reference materials to assist fans on gameday.