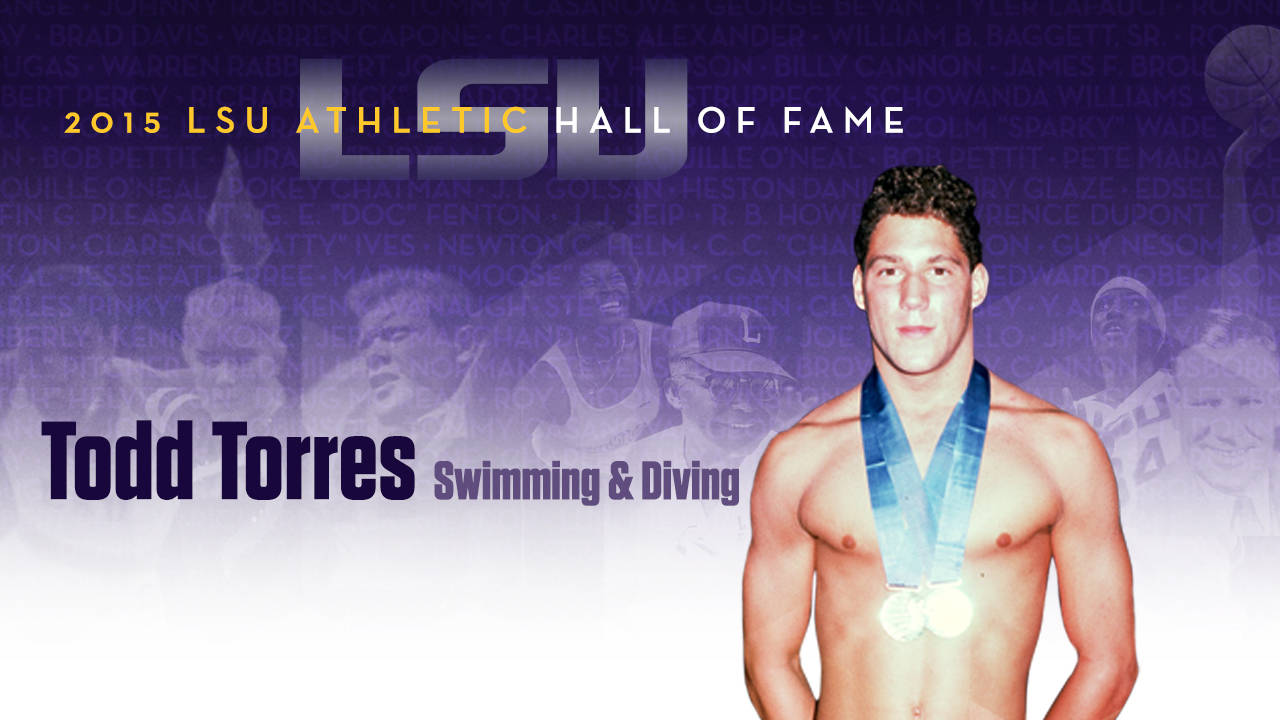 Todd Torres last competed for LSU 24 years ago, but his legacy continues to live on. The most decorated athlete in the history of the LSU Swimming and Diving program, Torres will take his place in the LSU Athletic Hall of Fame.

Torres came to Baton Rouge and instantly made a difference for the Tigers. The breaststroker broke out onto the scene during the 1986-87 season and was the NCAA Champion and SEC Champion in the 100-yard breaststroke.

The 13-time All American is one of two men to earn double digit All-America honors at LSU. More than the individual accomplishments, Torres was a part of the only SEC Championship team in the history of the program. That 1988 team finished sixth at the NCAA Championships, which is the highest standing in the program’s history.

For the most successful male athlete in the history of the LSU swimming program, the sport was never about individual accolades or success. Still to this day his former teammates and coaches say his attitude of wanting the best for the team was what led the men to the 1988 SEC Championship.

“Todd was a very selfless swimmer,” former LSU head coach and All-American swimmer Rick Meador said. “We certainly challenged Todd, which helped the whole team get better. He was never focused on individual goals, and that is what led to the success of all the other guys.”

Torres’ four years at LSU were characterized by a challenging environment. He used competition with his teammates to get better every day. Torres competed against four-time All American Andy Deichert for three years, which helped him improve.

After winning the national and conference championship in 1987, Torres went on to win another SEC Championship in the 200-yard breaststroke during his sophomore season. Even after all of his success during his early years at LSU, Torres never felt pressure.

“I don’t think the pressure really affected me,” Torres added. “Everything that I had accomplished leading up to that point was well above what I had hoped for. I didn’t feel a lot of pressure, but I feel that most successful athletes strive and look forward to the pressure of competing on the highest level.”

Torres competed in many international events during his swimming career like the World Championships, World University Games, Pan American Games, and Pan Pacific Games. He competed for Puerto Rico in the 1992 and 1996 Olympics. Torres, one of 16 LSU swimmers to race at the Olympics, finished 12th in the 4×100 medley relay and 16th in the 100 breaststroke at the ’92 Games.

“Swimming in the Olympics is the pinnacle of our sport,” Torres said. “It was a lifelong dream come true. In 1992, I was happy with my performance after I made the finals. Like any other competitive athlete, I wanted to do better. It was a great experience and my parents and brothers were able to watch me compete. It was exactly what I expected. There was a lot of pressure and excitement and overall an incredible experience.”

Torres will go down as one of the best swimmers in the history of the LSU program. His dominance in the breaststroke events has never been matched.

Former teammates and coaches say that Torres’ hard work and dedication helped lead the Tigers to national success. LSU finished in the top four in the SEC each year during Torres’ time on campus. The Tiger in that era also produced four of the top team finishes in program history ever at the NCAA Championships.

“I’m proud of what I accomplished at LSU and will cherish those memories wherever I go,” Torres said. “I had an incredible time, and I am so honored to be inducted into the LSU Hall of Fame with such incredible athletes. I know this would not be possible without my coaches and teammates. They are why I chose to come to Baton Rouge and why I was successful.”