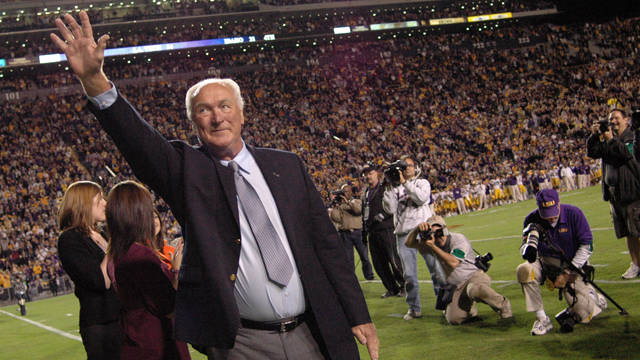 BATON ROUGE – Billy Cannon’s name, his image and his remarkable athletic career serve as emblems for LSU, the Southeastern Conference and college football. LSU’s only Heisman Trophy winner, Cannon led the Tigers to a national championship in 1958, igniting a love of the game in Louisiana and establishing a tradition of greatness at LSU.

But like many stories of lionized athletes who rise to the status of legend, there was a fall – and in the case of Cannon – also redemption. For the first time, Charles N. deGravelles reveals in full the thrilling highs and unexpected lows of Cannon’s life in “Billy Cannon: A Long, Long Run,” available just in time for football season from LSU Press.

“For years, people have asked me to write a book, and I didn’t really care to do it until I met a guy named Charles deGravelles, who I thought would present it in a fair way,” Cannon said. “Over a period of about a year, I went over the many stories that make up my nearly 80 years. I truly enjoyed remembering and retelling these stories, and my hope is that the people who read the book will enjoy them too.”

Through conversations with Cannon, deGravelles follows the athlete-turned-reformer from his boyhood in a working-class Baton Rouge neighborhood to his sudden rush of fame as the leading high school running back in the country. Personal and previously unpublished stories about Cannon’s glory days at LSU and his stellar but controversial career in the pros, as well as details of his indictment for counterfeiting and his post-release work as staff dentist at Louisiana State Penitentiary at Angola, unfold in a riveting biography characterized by uncanny success, deep internal struggles, and a champion’s spirit that pushed through it all.

“In the process, we accumulated dozens and dozens of photographs – some of which I’d never seen – and it was great fun seeing myself change and develop over the years,” Cannon said. “I think these stories and pictures which rekindled those times of my life will also rekindle those times for the people who read about them and see the pictures. I’m sorry there wasn’t space in the book for all of the stories and pictures we put together, but Charles tells me he’ll be able to share those too on the book’s website – or maybe we’ll write another book!”

DeGravelles spent more than 25 years ministering to the inmates of Louisiana State Penitentiary at Angola, including the men on death row. A deacon and teacher living in Baton Rouge, deGravelles has published in literary journals and anthologies nationwide.

“In the process of writing this book, I was particularly struck by something one of the Cannon daughters said, speaking of her father’s many fans: ‘They always thought they knew him, when they idolized him and when they condemned him, but they never really knew him at all,’” DeGravelles said. “I was able to spend a year interviewing and truly getting to know Billy Cannon, warts and all, and I came to see him as a remarkable individual with a remarkable story to tell, and, I’m proud to say, a friend.”

For more information or to purchase a copy of “Billy Cannon: A Long, Long Run,” visit www.lsupress.org.