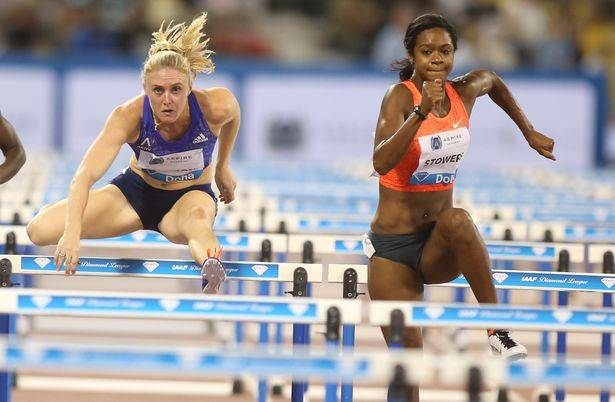 BATON ROUGE – Former Lady Tiger Jasmin Stowers regained the form that made her the world’s leading sprint hurdler earlier this season when she set the meet record in Friday’s IAAF Diamond League meet held at London’s Olympic Stadium as she took home the victory in a scorching 12.47 seconds during the Sainsbury’s Anniversary Games.

Despite running into a strong headwind of -1.2 meters per second, Stowers proved to be the class of the field in Friday’s hurdles while crossing the finish line nearly two tenths of a second ahead of 2015 U.S. Champion Dawn Harper-Nelson in second place at 12.64. Brianna Rollins made it a clean sweep of the medals for the United States in third place with a time of 12.65.

It was such a honor to compete at London’s Olympic Stadium. My form is coming back. Excited for what the future holds!!!!

Stowers showed the form that made her the world’s leading 100-meter hurdler earlier this outdoor season while running her fastest race since May with her winning run of 12.47 in Friday’s competition. She broke a 5-year-old London Diamond League meet record of 12.52 previously set by Canadian standout Priscilla Schliep set on Aug. 13, 2010, before the building of the Olympic Stadium.

It was the second time this season that Stowers set a Diamond League meet record with her performance as she also ran her seasonal-best and personal-best time of 12.35 (+0.9) in Doha back on May 15 that is still the No. 2-ranked time in the world this season to make her the No. 8-ranked sprint hurdler worldwide in the history of the sport of track and field.

Friday’s opener in the two-day meet being held at London’s Olympic Stadium also saw former Lady Tiger national champion and 2015 U.S. silver medalist Cassandra Tate run the second-fastest time of her career with a 54.36 clocking to take third place in the women’s 400-meter hurdles behind Czech Republic’s Zuzana Hejnova in first place at 53.99 and USA’s Georganne Moline in second place at 54.24.

Tate continued her impressive 2015 outdoor season highlighted by a silver-medal-winning runner-up finish at the USA Track & Field Championships on June 28 where she posted her seasonal-best and personal-best of 54.01 to earn her spot on Team USA going to Beijing for the IAAF World Championships in Athletics in August. Tate’s 54.01 remains the No. 4-ranked time worldwide this season.